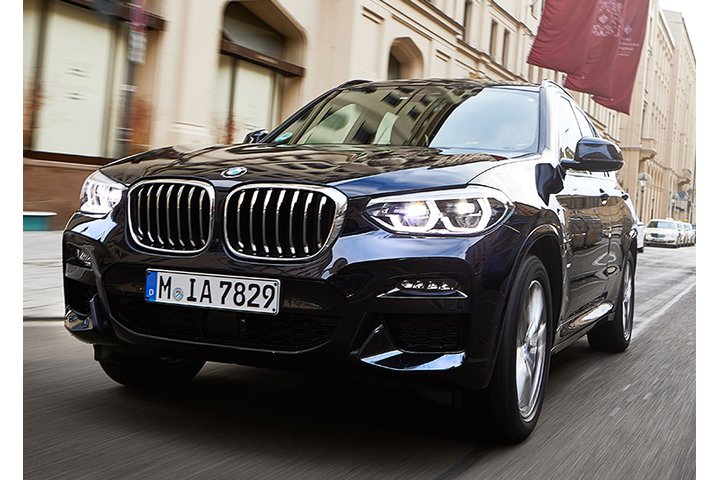 With the launch of the X3 xDrive 30e and X5 xDrive45e plug-in hybrid electric vehicles, BMW now has six PHEV models in its line-up. BMW has revealed more details about its newest hybrid model, the BMW X3 xDrive30e. The first X3 to incorporate electric power can travel up to 34 miles on its battery alone, and it officially returns 128.4mpg. You can order the X3 plug-in hybrid now, with first deliveries likely to start in early 2020.

The BMW X3 xDrive30e uses a twin-turbocharged 2.0-litre petrol engine and an electric motor for a power output of 249hp. It’s the same setup as in the BMW 330e, and even comes with an ‘XtraBoost’ function that liberates another 40hp when the battery has sufficient charge.

Power is sent through an eight-speed automatic gearbox and BMW’s xDrive all-wheel-drive system. Zero-to-62mph is reached in 6.1 seconds and the top speed is 130mph. A CO2 output of 49g/km means it should find favour with company-car drivers, too.

BMW has stashed the battery pack under the rear seats, to prevent too much of the boot space being taken up. The hybrid’s 450-litre boot is about 100 litres down on the petrol and diesel models, but it’s still a decent size. As per the standard X3, the plug-in hybrid is available in SE, xLine and M Sport trim levels. All versions allow preheating or cooling of the interior before you get in.

Another plug-in hybrid SUV, the BMW X5 xDrive45e, has been launched at the same time. A large 24kWh battery (double the size of the X3’s) means the X5 can travel an impressive 54 miles on electric power alone. With a 3.0-litre petrol engine and a 111hp electric motor, the X5 generates as much as 389hp and 0-62mph takes 5.6 seconds. Officially, it returns up to 235.4mpg and emits 28g/km of CO2.

Meanwhile, the BMW 530e and BMW 225xe Active Tourer hybrids have bigger batteries, and can now manage up to 35 and 31 miles on electric power respectively.

To register your interest in leasing the all-new BMW X3 xDrive30e Hybrid, please call our friendly and helpful sales team on 0161 826 9716