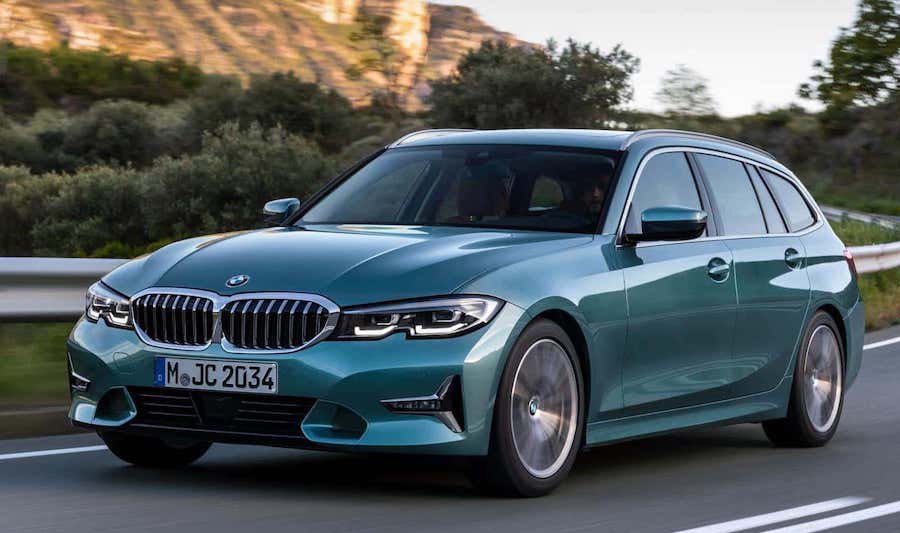 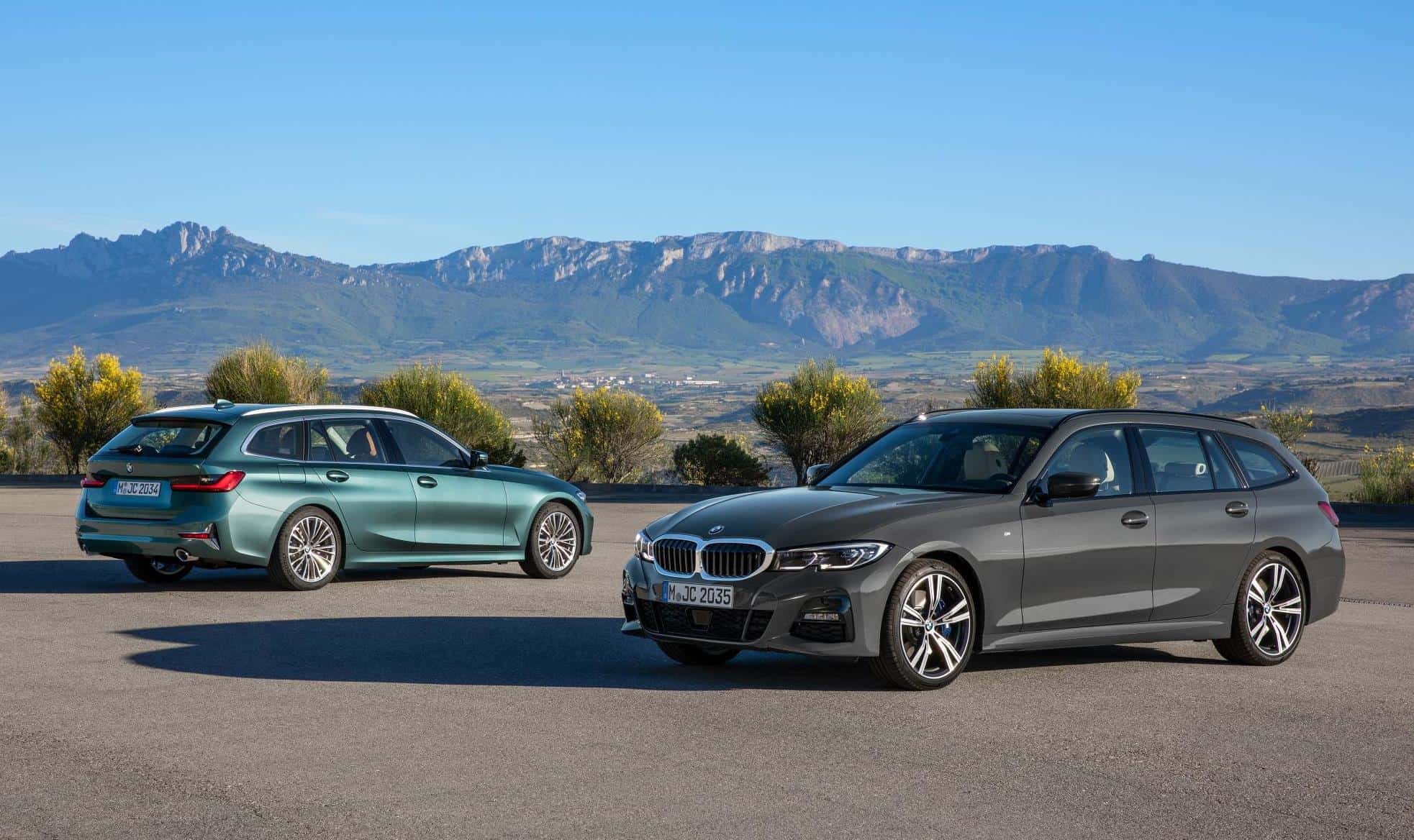 Following the arrival of the all-new 3 Series saloon earlier this year, BMW has taken the covers off the 2019 3 Series Touring.

With increased boot space and improved dynamic capabilities, it’ll also feature for the first time a plug-in hybrid (PHEV) option due to arrive around July 2020. Orders for the new 3 Series Touring are now open and first deliveries can be expected during the autumn.

On the outside, the styling mirrors that of the new 3 Series saloon. It’s very much an evolution of the outgoing model and is instantly recognisable as a BMW. The kidney grille is larger than before, although less visually intrusive than those inflicted on some recent BMWs. 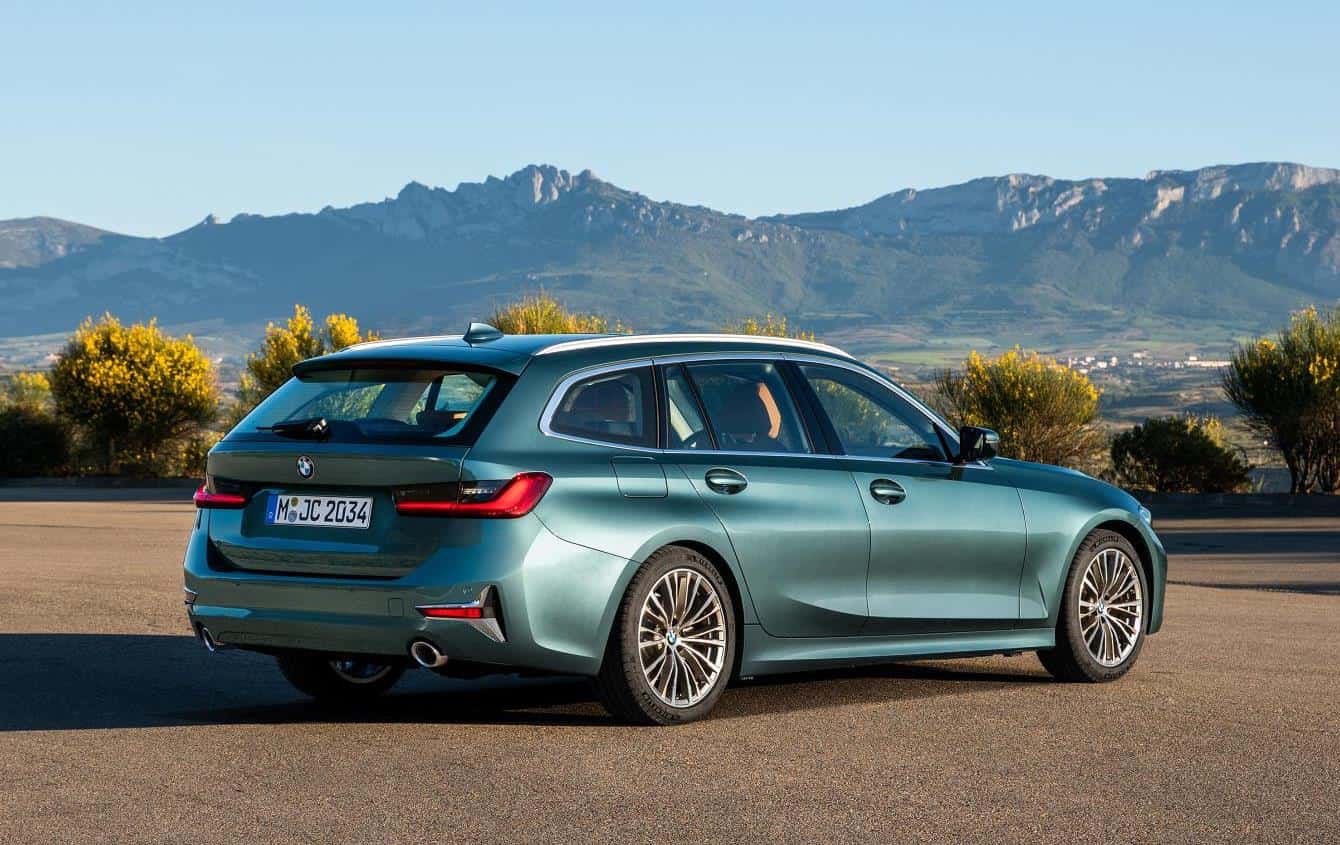 LED headlights are standard across the range, as are LED tail lights. It’s a larger car than its predecessor too at 4,706mm long – with width and height also marginally more too – although that’s not hugely noticeable from the outside.

In the cabin, you’ll find a new instrument panel that offers a much more modern look along with a redesigned instrument cluster. Displays and buttons for the air conditioning are at the centre of the instrument panel while the light functions are operated via a panel of buttons next to the steering wheel.

Infotainment-wise, it gets BMW’s latest iDrive system with an 8.8-inch touchscreen display. This can be upgraded to a 10.3-inch screen, while BMW’s 12.3-inch digital cockpit replaces traditional dials on some models. 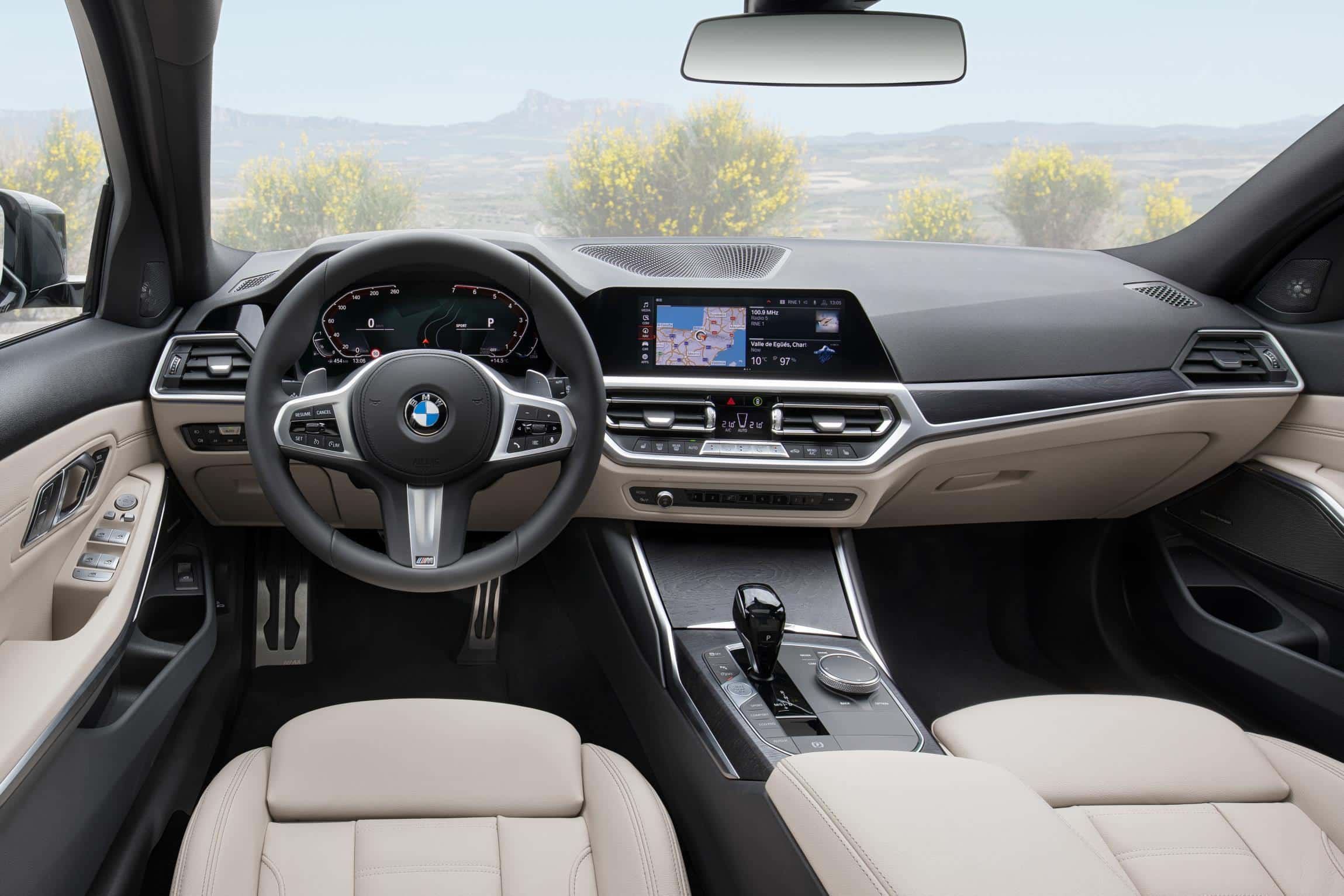 The system helps the driver, learns their preferences and is familiar with their favoured settings – e.g. for the seat heating or the places they drive to frequently using the navigation system.

It gets 500 litres of regular boot space, which is just five more than the outgoing model. This can increase to 1,500 litres with the 40:20:40-split row two seatbacks folded flat. All models feature an automatic electric tailgate as standard. 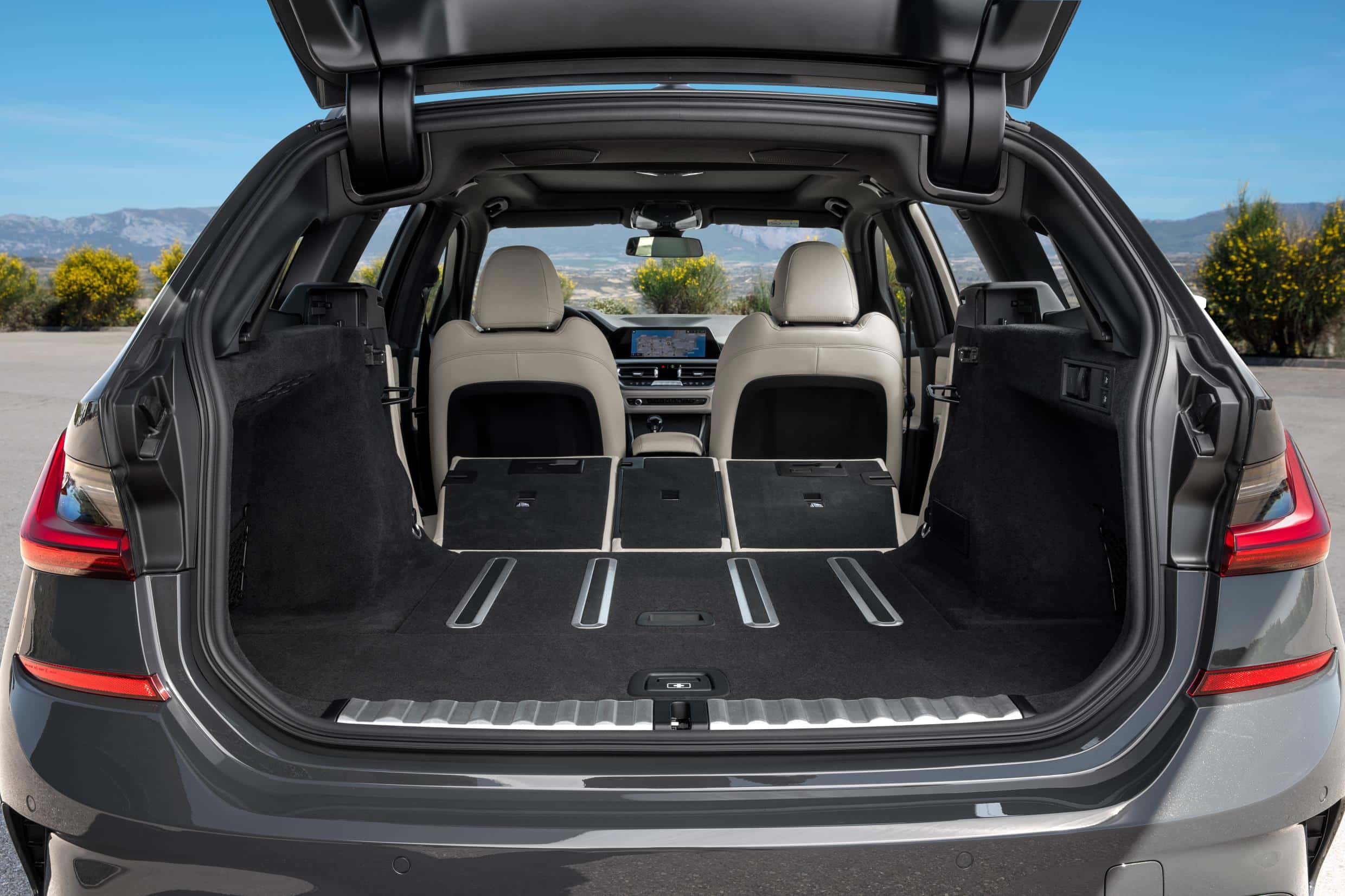 The 2019 BMW 3 Series Touring range will be available in four trim grades: the SE, Sport, M Sport and UK-only M Sport Plus Edition. Despite being the range-entry version of the Touring estate, the SE still offers a lot of kit, including 17-inch alloy wheels, automatic lights and wipers, three-zone climate control and a six-speaker, 100W stereo system. The Sport version has 18-inch alloys, exclusive jet-black trim details and heated front sports seats.

M Sport models get a beefier body kit, high-gloss black trim details and heated leather sports seats. In the UK, the range-topper is the M Sport Plus version. Intended to be a sportier variant of the 3 Series Touring, it wears 19-inch alloys as well as uprated brakes and an adaptive suspension system. 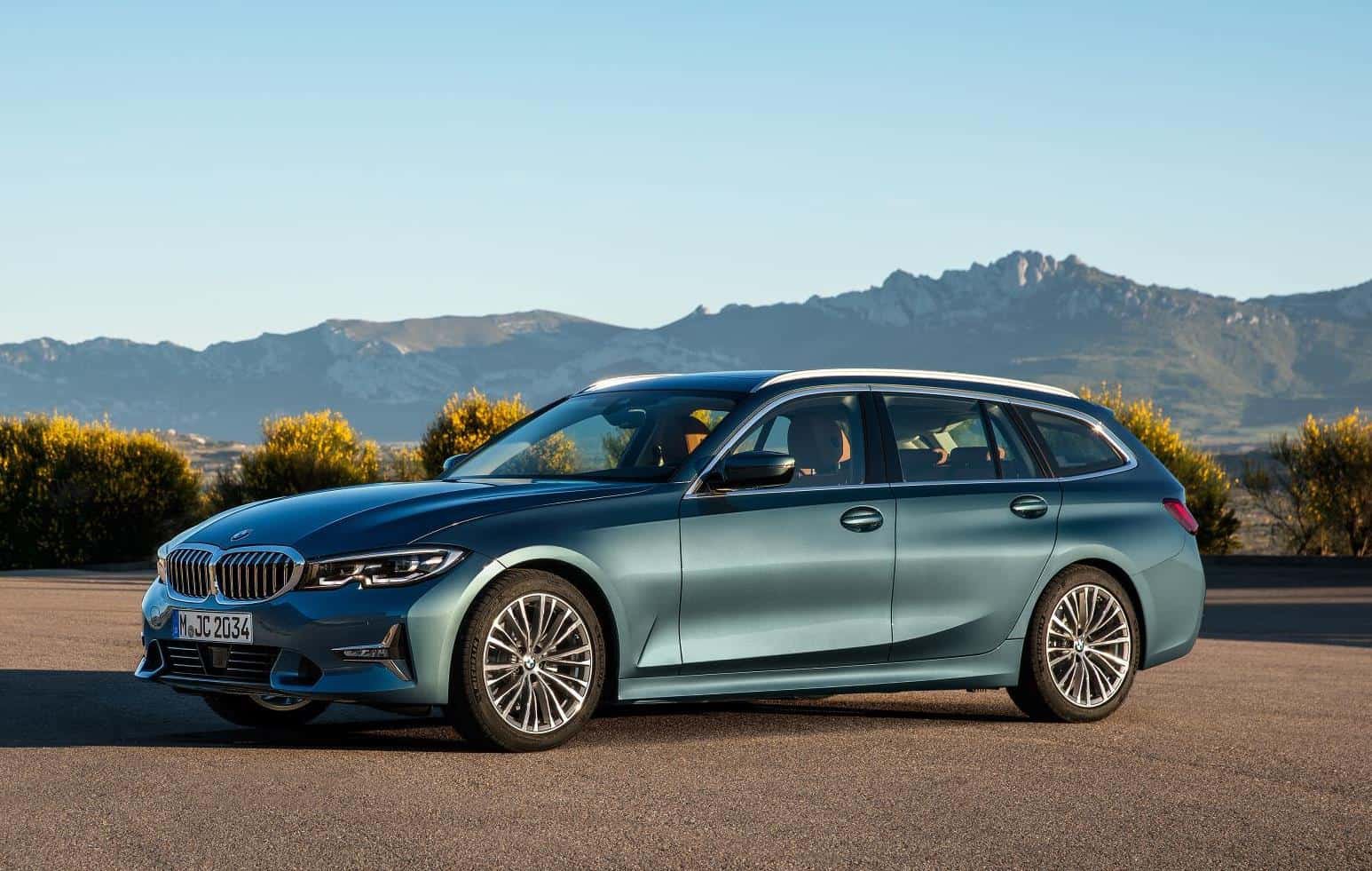 The range of standard and optional interior trim elements available for the instrument panel and centre console is almost entirely new. As well as open-pore fine wood options, customers can choose from a variety of aluminium trims including a new aluminium ‘mesh effect’ interior trim.

BMW has endowed the new 3 Series Touring with numerous new safety systems, with automatic emergency braking now standard across the range. Adaptive cruise control with stop/go function, steering assist and side collision alert are available for the first time, too.

A range of petrol and diesel engines – which are all paired to an eight-speed automatic ‘box – will be available from launch, with the range kicking off with the four-cylinder 320i producing 183hp. It’ll get from rest to 62mph in 7.6 seconds. A more potent 330i model is also available which produces 256hp, while the range-topping M340i gets a six-cylinder turbo producing 371hp – enough to get it from rest to 62mph in a blistering 4.5 seconds. 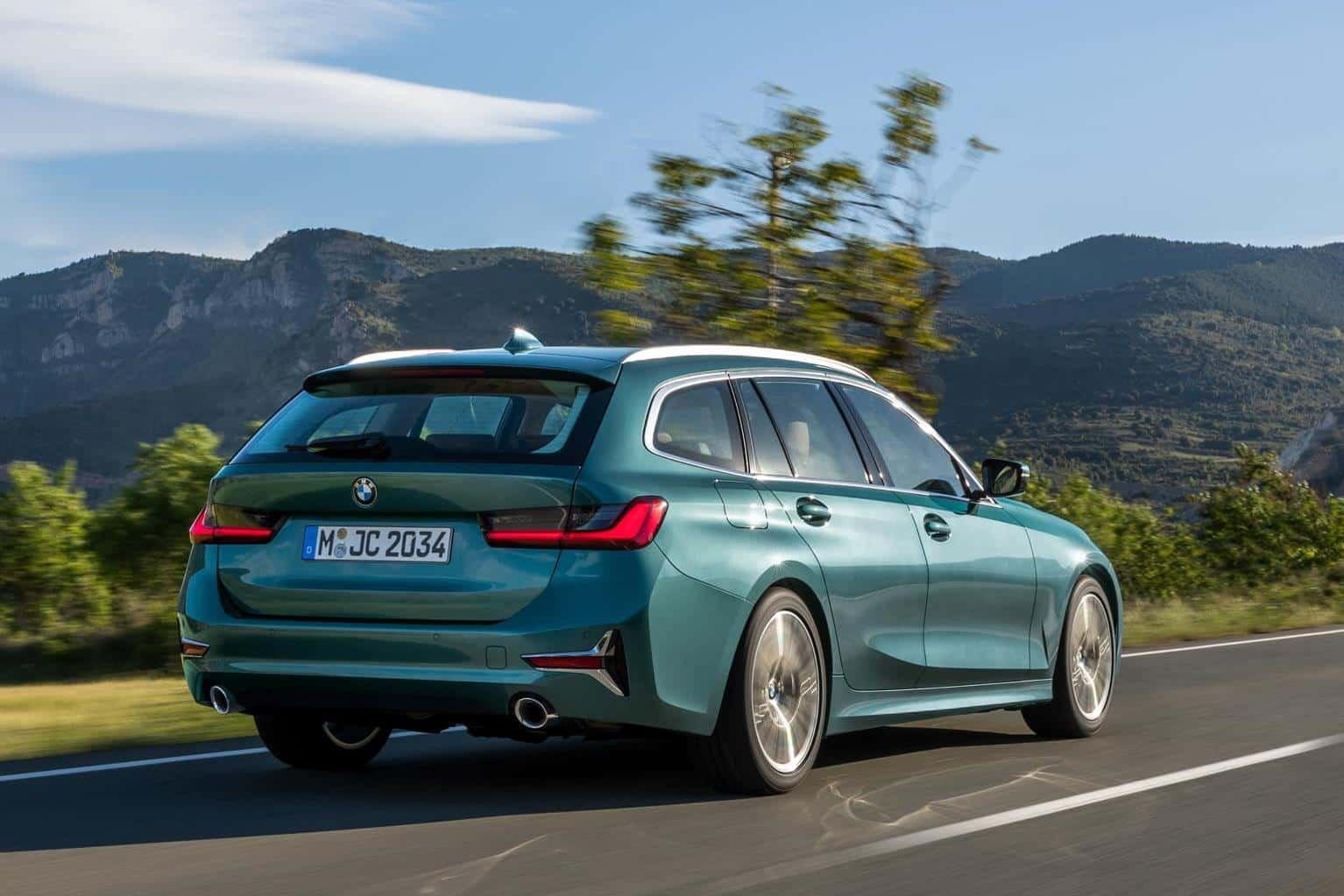 When compared to the outgoing model, the 2019 BMW 3 Series Touring has a body that’s 25 per cent more rigid. This promises to make the car feel more agile when driven through fast corners. The optional M Sport Plus package enhances the drive even further, giving the ability to stiffen the suspension for sportier performance and provides variable sport steering, which can sharpen up the car’s responses on a twisty road.

From next summer, there will also be a PHEV plug-in hybrid variant, badged the 330e. With a combined 254hp available from its 2.0-litre petrol engine and electric motor, this will be able to drive for up to 39 miles on electric power alone. The official economy stats of 122mpg and 52g/km of CO2 are hugely impressive. However, due to the battery packs we can expect the boot of the PHEV model to offer a tad less load capacity.

To register your interest in leasing the all-new BMW 3 Series Touring, please call our friendly and helpful sales team on 0161 826 9716.

The outgoing 3 Series remained BMW's second biggest seller in its...

The all-new, third-generation BMW 1 Series has gone on UK sale, with...

This week, Volkswagen confirmed further details for the facelifted...