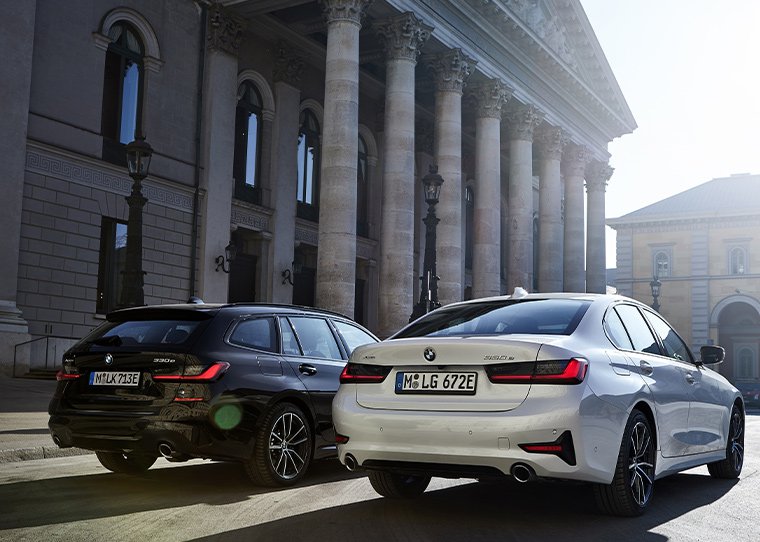 Joining the existing 330e Saloon from this coming summer, the Touring will be offered in rear-wheel drive as well as BMW’s xDrive all-wheel drive system, which will also be made available on the Saloon, expanding the range further and playing a core role in BMW Group plans to offer 25 electrified models by 2023. The new Touring version will use the same petrol-electric powertrain as the current 330e Saloon, which pairs a 184hp 2.0-litre four-cylinder petrol engine with a 113hp electric motor integrated in the eight-speed Steptronic transmission, giving a total system output of 252hp. This can be boosted by an additional 40hp for up to 10 seconds using the XtraBoost function. The 0-62mph time is 6.1 seconds for the Tourer with a 136mph top speed. Early data puts the Touring’s combined fuel consumption at 176mpg with combined CO2 emissions from 39g/km, compared to 176-201mpg and 32-37g/km for the Saloon. The new BMW 330e xDrive Saloon accelerates from standstill to 62mph in 5.8 seconds, reaching a top speed of 139mph, with figures of 6.2 seconds and 133mph for the 330e xDrive Touring. Electric-only ranges stand at 36 and 34 miles respectively.

The 12.0kWh lithium-ion battery, manufactured in-house, is positioned under the rear seat, impacting slightly on boot space, which is reduced to 1,420 litres. Electric-only range stands at 34 to 36 miles and charging can be carried out via a BMW i Wallbox, taking three and a half hours to achieve full capacity, while using the standard charging cable at conventional household sockets gives a 100% charge in 5.7 hours. All 3 Series PHEV models get active pedestrian protection as standard, providing acoustic alerts when running on electric power at speeds of up to 19mph.