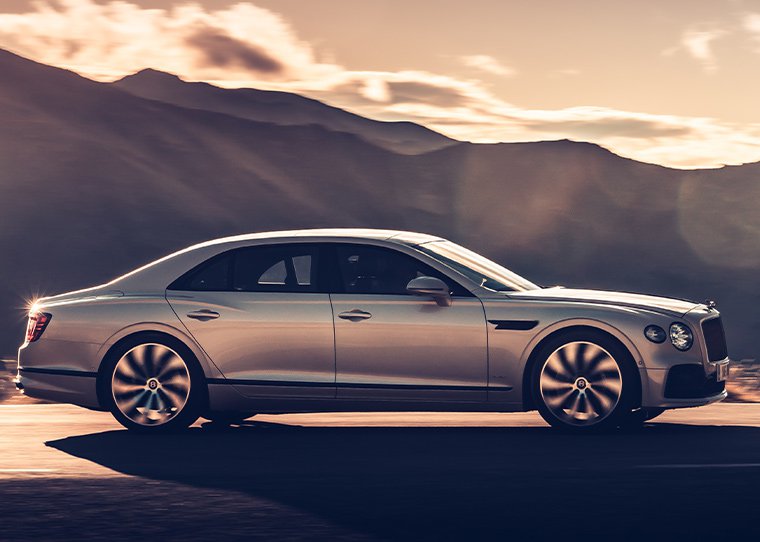 Bentley is introducing a new blackout package for its Flying Spur saloon for those who prefer a more subtle, dark exterior trim to the typical chrome highlights. The Blackline removes almost all of the brightwork on the new Flying Spur's exterior, with the exception of the W12 badges ahead of the front doors and both the ‘Bentley’ lettering and the corporate badge on the trunk lid. Both the standard 21-inch wheels and the optional 22-inch ‘Mulliner’ set also retain their existing finishes. Everything else has gone black, including the ‘Flying B’ mascot on the hood, radiator and grille meshes, side window surrounds and the ‘blade’ design that runs from the front fenders across the doors to the rear bumpers. The head and tail lights both get blacked-out bezels and the door handles, front fender vents, and exhaust outlets all get a darkened finish as well. The Flying Spur is the closest Bentley comes to building a true sport sedan. Though it competes with the likes of the Rolls-Royce Ghost and the Mercedes-Maybach S-Class, it's still the more youthful offering of Bentley's four-door models, with the statelier mission being handled by the larger Mulsanne. This makes the Flying Spur the ideal candidate for the Blackline spec, which has already generated interest on the two-door Continental GT. While Bugatti may be the performance spearhead for the VW Group brand portfolio, Bentley has long been known for building luxurious touring cars and sedans capable of traveling at high speeds over long distances. The Flying Spur's W12 engine may not impress the same way a Bugatti Chiron's does, but with 626 horsepower and 900Nm of torque, the 6.0-litre powerplant is anything but underwhelming. For a heavyweight saloon weighing in at a little short of two and a half tonnes, the spritely Flying Spur will hit 60 mph in just 3.7 seconds on its way to a top speed of 207 mph.

AUDI: Luxury meets efficiency in the A8 L TFSIe PHEV

Audi reveals more information on its petrol-electric A8 PHEV executive...