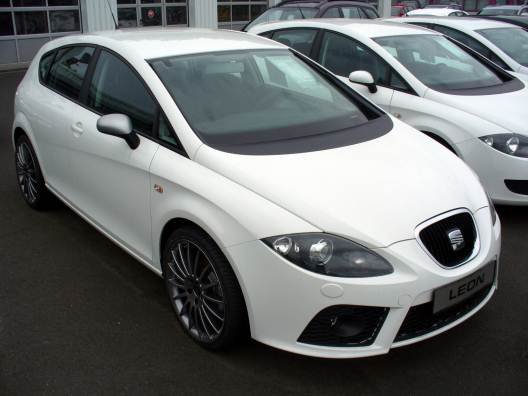 The VW Golf GTD and the Seat 184 FR are two fine specimens of cars, but like with everything in life there are pros and cons. We have scoured through the reviews to come up with the overall consensus out there, just to make your life a little bit easier. But don't take our – or anyone else's – word for it: test-drive them yourself and see which you think rules the roost. We don't like to judge a book by its cover, but first up – let's start with the exterior...

The 'D' in GTD doesn't seem to have made a huge difference, judging by first impressions. Car Magazine reckons that, apart from the badges, wheels and chrome strip underscoring the grill (instead of red), it is virtually impossible to differentiate the GTD from the GTI. Its 18" wheels are an inch bigger than the SEAT and AutoExpress love its bi-xenon headlamps that come as standard. Top Gear say the GTD has "just the right amount of swagger".

The SEAT, says MSN Cars, is available with the exact same engine as the GTD and a very similar exterior, but many will go for the Golf as it is a "fantastically universal statement of subtle good taste". The GTD looks sharp, but they are also huge fans of the SEAT, admiring its tinted rear windows, sports bumpers and twin chrome exhaust finishers. They like the car's new angular lines, saying: "it looks plenty purposeful".

Similarly, the inside of the GTD is almost identical to the GTI. However, AutoExpress like its "racy hot hatch styling cues" that seem to exude upmarket luxury like no other. The switchgear, they say, operates with precision, and all major controls are laid out perfectly. Top Gear say it is slick and typically "Volkswagen-y" inside, with plenty of space.

MSN Cars praise the SEAT's sports seats with imitation leather bolsters and they love the extra touches: the dual-zone climate control, parking sensors and 8-speaker stereo system – to name but a few. A review in the Independent says that the designers have really "gone to town" on the interior – a big improvement on that of the old Leon. In their opinion, the cabin has quite a bit more "visual interest" than that of the Golf.

MSN Cars state that, while the GTD looks very similar to the GTI, it is powered by a "ruggedly effective diesel engine". AutoExpress describe the performance of the GTD as "poised, agile and beautifully balanced" with supressed road and wind noise.

According to the chaps at Top Gear, this is the best SEAT in years and is "stonkingly good" to drive. WhatCar also say that it's a sporty car that feels "genuinely rapid" and it's also pretty refined once you're up to cruising speeds. The SEAT really comes into its own when it's on the road, says the Independent, claiming that it is delivering exactly the sort of improvements that have been seen on the Golf.

Despite its similarities with the GTI, the all-new GTD promises supermini-rivalling running costs, according to AutoExpress, with a CO2 output of a mere 109g/km (manual) and claimed fuel economy of up to 67.3mpg.

The Independent says that this "top diesel" also turns in very good economy and emissions figures in official tests – 65.7mpg (slightly lower than the GTD) and 112g/km (slightly more).

Overall, it seems that there's really not much in these two cars. Both have had their praises sung by the critics so, ultimately, it's down to personal preference. But which will you go for? If you are thinking of leasing either of these cars, contact Leasing Options today for some of the best deals available.