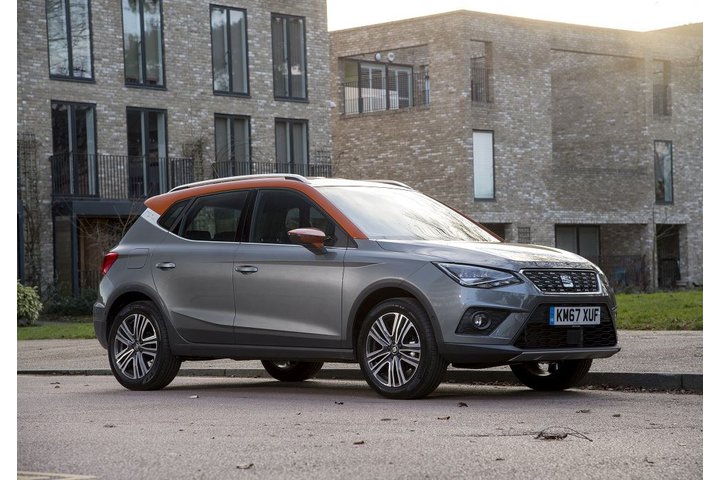 SEAT Arona: A first from SEAT, but does it go to the top of the class?

Hungry for a slice of the UK’s compact SUV action, SEAT has introduced its second SUV, the new Arona. Sitting in the model line-up below the larger and much-lauded Ateca SUV launched last year, the Spanish auto maker will be hoping for a similar speedy return on its investment at the smaller end of the market. It will form the base of a three-model SUV line-up when the large and recently-named Tarraco joins the mix later this year.

Named after a small municipality in Tenerife (SEAT has a long-standing tradition of naming its cars after places in Spain), the Arona is based on SEAT's small Ibiza hatchback and shares the VW Group's MQB-A0 platform, which you'll also find underpinning the latest Volkswagen Polo.

The Arona will attempt to occupy a space awash with similar models such as the Citroën C3 Aircross, Hyundai Kona, KIA Stonic and Vauxhall's Crossland X…and those are only the latest additions. Mention sector stalwarts such as the Nissan Juke, Renault Captur, Peugeot 2008 and Mazda CX-3 and particularly the Volkswagen T-Roc – with which it has much in common – and you begin to understand the magnitude of the challenge that the Arona faces. 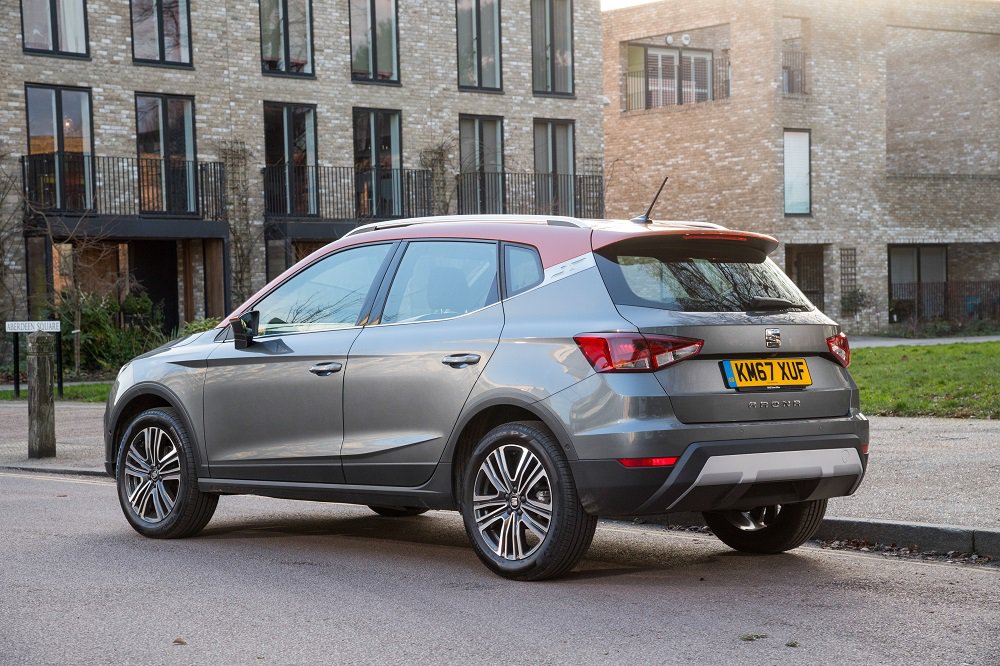 However, the Arona is not entirely without arsenal. It’s a sharply-styled, five-door hatch that draws from the most attractive aspects of SEAT's latest 'family' look to quite handsome effect. From the bold grille to its striking profile enhanced by the option of a contrasting colour roof and a chiselled tailgate, the Arona is certainly a distinctive sight.

The Arona is 79mm longer and 99mm taller than the Ibiza hatch, but offers a raised driving position 52mm higher than its stablemate. For added capability, the Arona has 190mm of ground clearance, depending on selected wheel choice.

With ‘personalisation’ being a current industry buzzword, the Arona is easy to personalise with several interesting visual cues including metallic paint and a contrasting roof which is standard on all UK versions. 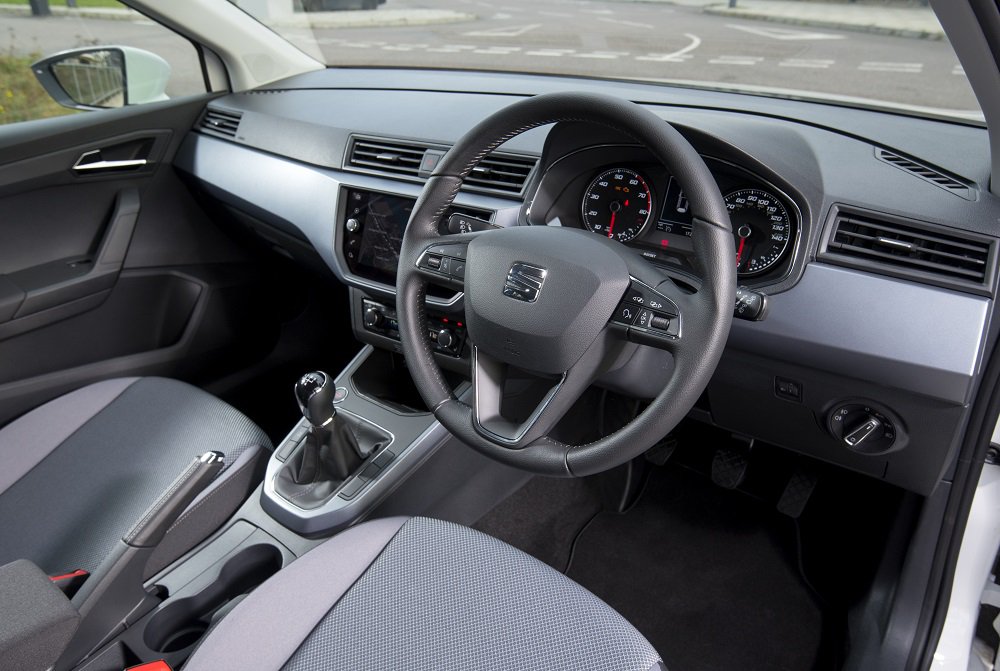 Here is where SEAT drops the ball with the Arona – which looks and feels as though it’s built to a budget – and a low one at that. The dashboard and door trims are mostly hard, brittle-sounding black plastic and the design and layout are from the latest Ibiza – the most significant improvement to which was in the drive dynamics.

Versatility is also lacking as most rivals offer features that appeal to small but growing families such as clever console, underfloor or overhead storage. Things don’t improve for the souls in the back as – apart from swathes of the aforementioned plastics – there’s no adaptive sear seating arrangement, no vents, no armrest, no cup holders…nada. Thanks to a higher roofline, adults will find more headroom than the Ibiza hatch. 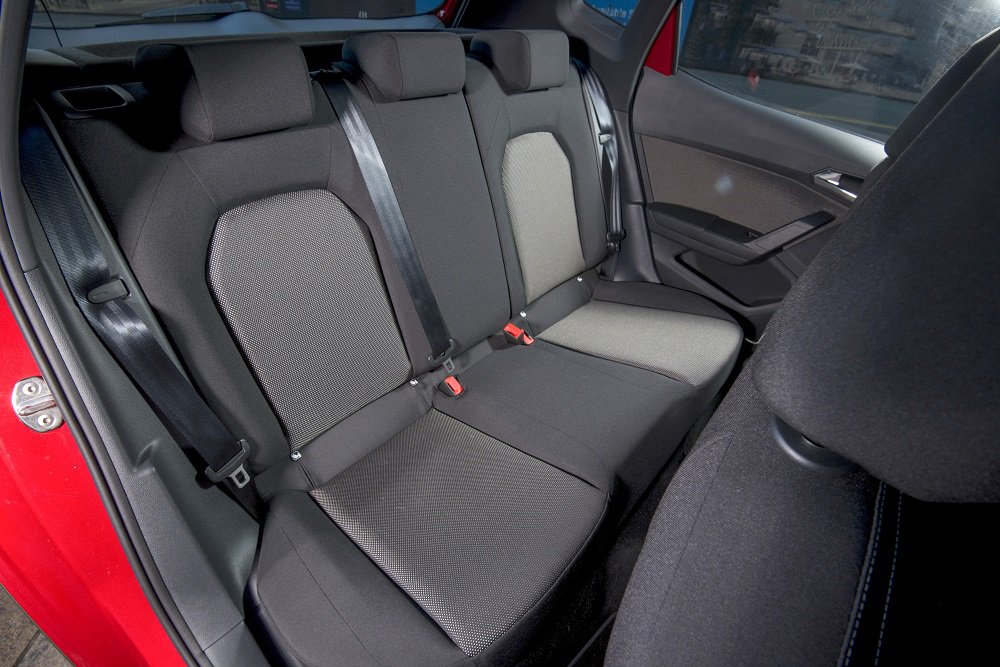 The rear seatback is split 60/40, which can be handy and an adjustable boot floor means there is up to 400 litres of space for a weekend kit.

Those in the front are better looked after with good head and leg room and the driver’s instruments and switches are well-laid out, logical and clear, and have good, VW quality look and feel. The conventional but intuitive heating and ventilation controls are proper knobs rather than screen-controlled. Hurrah!

Every version of the Arona (except the range-entry SE) gets an excellent central infotainment unit, including navigation and phone mirroring. The graphics are clear, the touch-response is fluid and it has the VW Group’s proximity sensor, so extra option buttons magically appear on the screen as your finger waft near it, but quickly disappear to reveal your original screen if you change your mind. 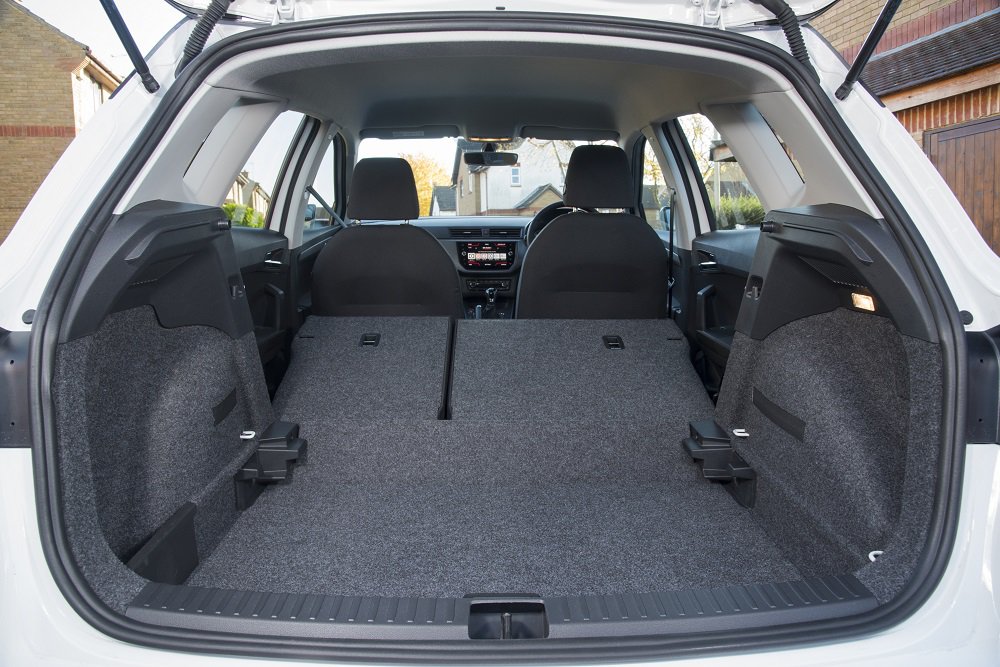 The first two – the SE and SE Technology – are focused towards the value end of the market. The SE offers 17-inch alloy wheels, a two-tone roof, and LED daytime running lights and the SE Technology adds just rear parking sensors.

The range then takes on sporty and performance overtones with the FR and FR Sport. The FR wears a different set of 17-inch alloys and a redesigned body kit along with chrome roof rails. The FR Sport has larger, 18-inch alloys. 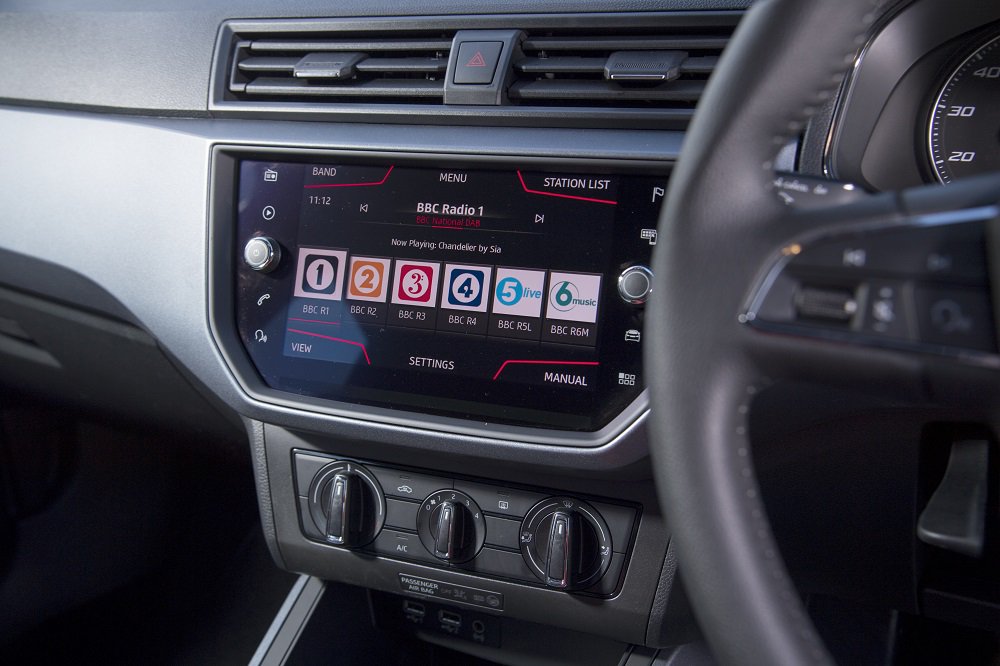 The final two trims – Xcellence and Xcellence Lux focus more on comfort and luxury, with the Xcellence shod with yet another design of 17-inch alloy wheels and a few chrome exterior embellishments. The Xcellence Lux gets 18-inch alloys, front parking sensors and a rear-view camera. 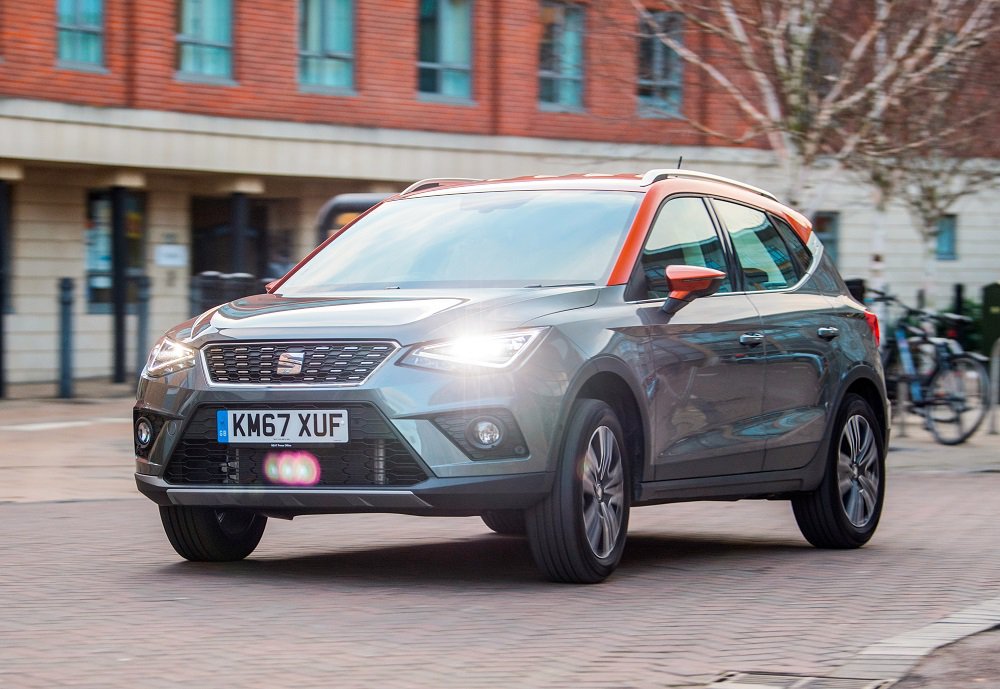 The Arona engine line-up is rather simple as there are two TSI petrol and one TDI diesel units on offer, in varying states of tune.

The first petrol, a turbocharged three-cylinder one-litre engine is available in 95PS and 115PS power outputs and paired with five- or six-speed manual gearboxes or a 7-speed DSG automatic. The larger petrol engine is a 1.5-litre four-pot EVO offering 150PS. This is available with a 6-speed manual ‘box and only on either FR trim.

If diesel is your thing, then there’s the one TDI available in two states of tune - 95PS and 115PS and paired with both manual ‘boxes or the DSG (95PS only).

Unlike some compact SUVs, the Arona doesn't offer four-wheel drive or any kind of off-road traction-control system. 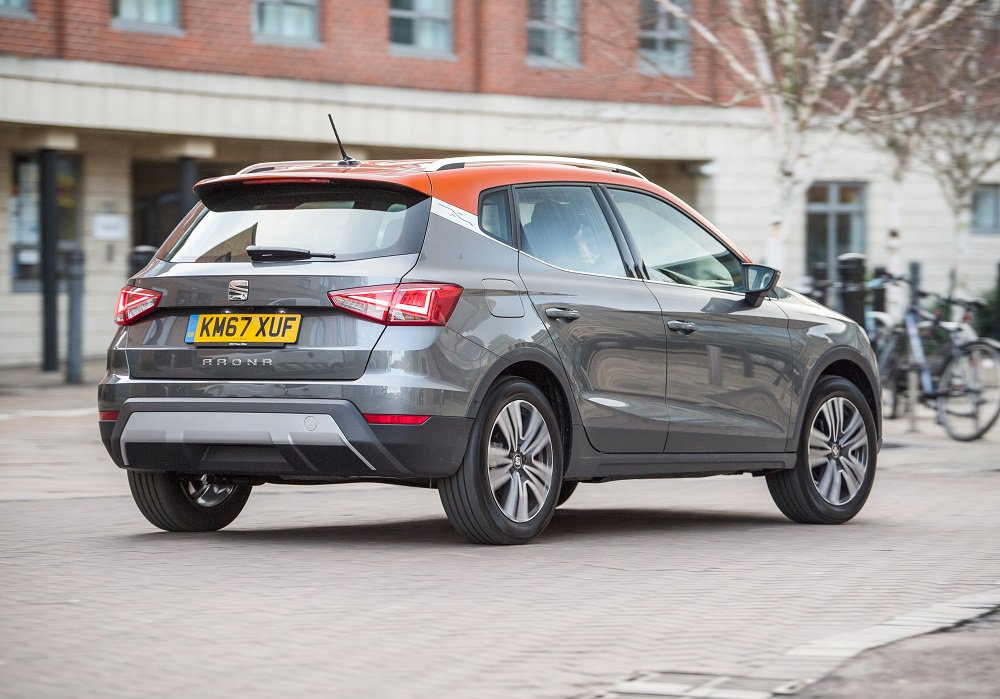 The SEAT Arona and Ibiza both deploy the VW Group's MQB-A0 platform, which you'll also find underpinning the latest Volkswagen Polo. This makes the Arona very car-like to drive, with a marginally elevated driving position but none of the SUV shortcomings of bulk or instability.

However, the way the Arona behaves on the road depends largely on which version you go for. The FR models have a more firm suspension set-up than the other models. Even with the two SE models you feel a little too much of the road surface beneath you, especially at low urban speeds, so it’s not the most comfortable car of its type. Still, it’s nothing that’s going to upset you or your passengers.

In the corners, the car’s tall body and small footprint result in a fair amount of body roll as you change direction, but again, it’s nothing that going to have you feeling unsettled. The same can’t be said of the steering which is super-light, dart-quick and rather devoid of feel. The plus-side of such an arrangement is easier parking.

For the for enthusiastic pilot the FR models are better to drive as the extra chassis and suspension stiffness keeps body roll more in check and makes the car feel generally sharper and more agile, while having little effect on ride comfort. The FR’s can be driven through fast turns with enthusiasm eventually running wide if you overstep the mark which can take some doing as your passengers will be kicking and screaming long before the Arona’s road-holding limits are achieved.

It is as much fun to drive as the acclaimed Ibiza, which essentially is what the Arona is – albeit slightly raised. 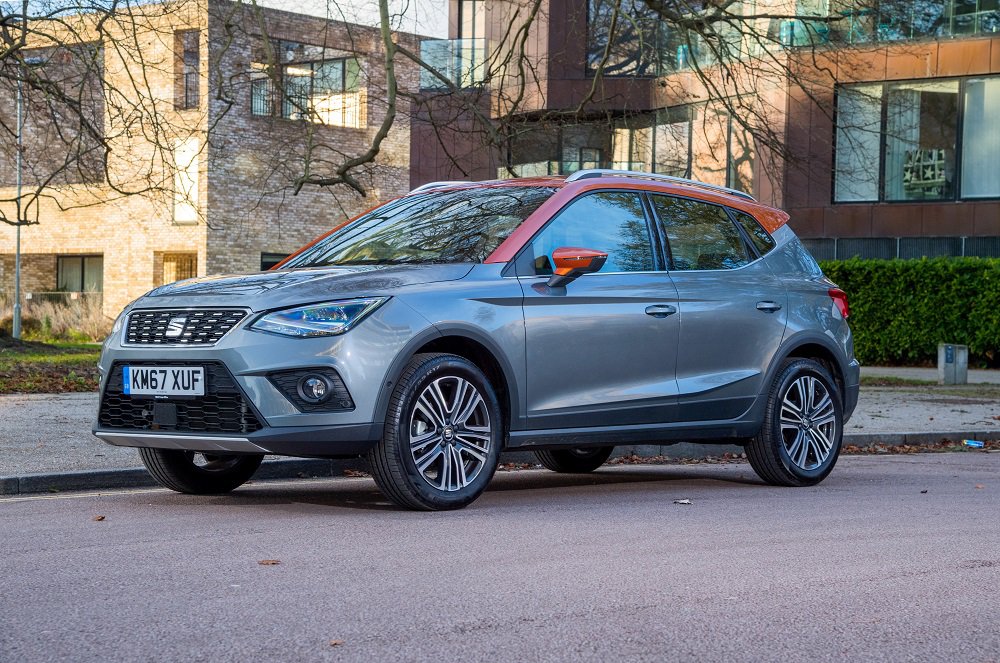 As SEAT’s first foray into the compact SUV market, the Arona is an appealing proposition.

It’s decent to drive, affordable to buy and run, and just about practical enough for a small family. With several versions available, all of which are well-equipped as standard, the SEAT Arona is worth considering alongside its best rivals.