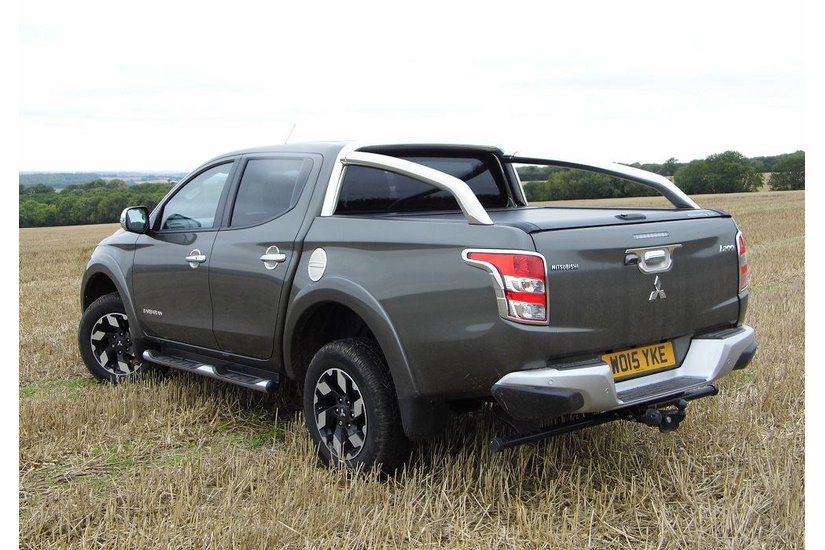 That feeling, when you stare out of the back door into a space the estate agent optimistically referred to as a garden…that overgrown, unkempt and desolate place where snakes, lions, tigers and elephants freely roam and crocodiles frolic with flesh-eating mosquitos in a now putrid pond of green, stagnant soup? Yeah, that.

So, there I was, at silly-o’clock one recent Sunday morning, armed with a war chest of borrowed cutters, trimmers, digging tools, machetes and other horticultural weaponry, I pondered as to how on earth I was going to transpose what was likely to be an entire one fifth of coastal Hampshire to my local skip – and all in those silly little green bags, too. 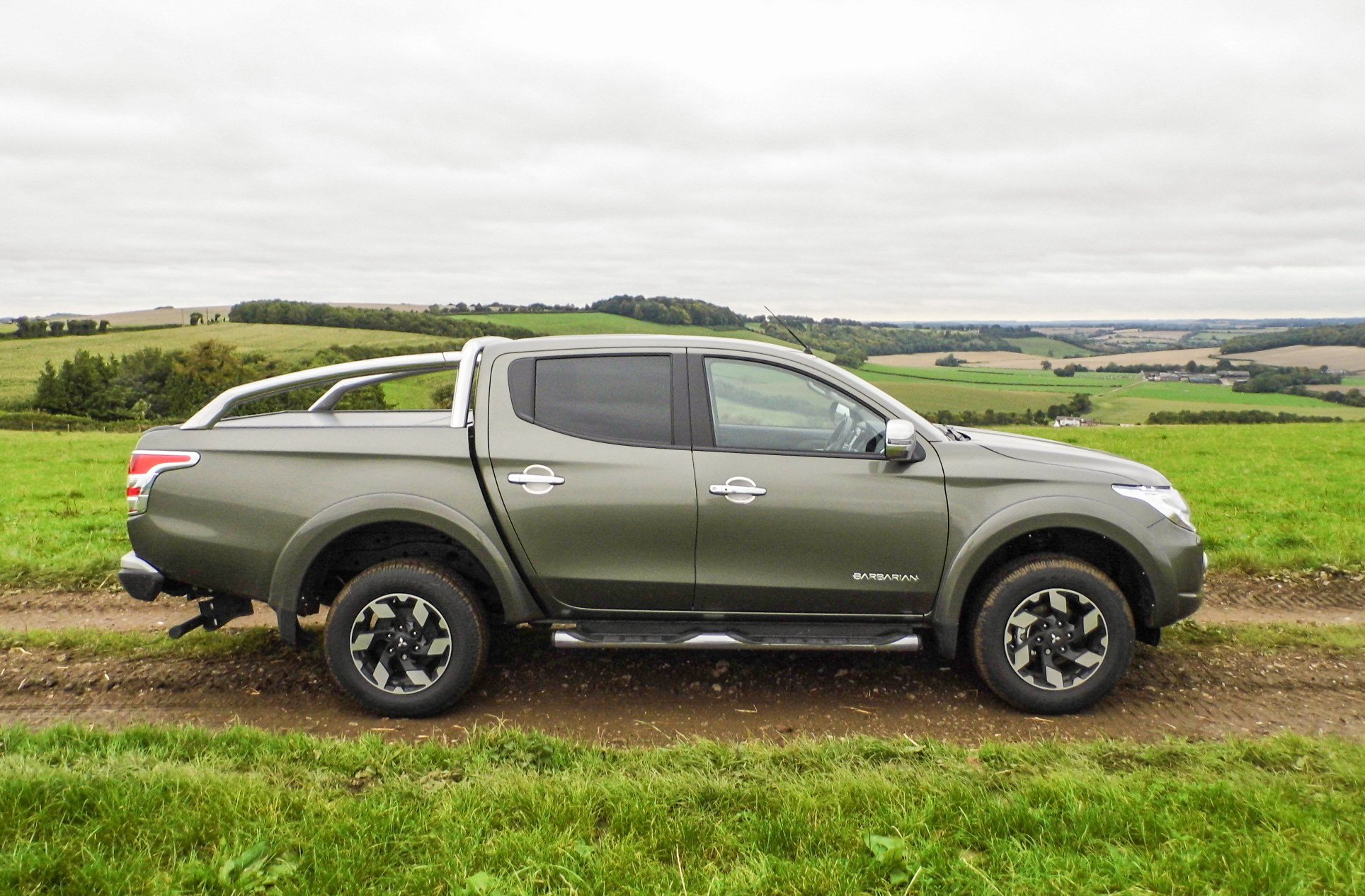 Through foggy grey cells emerged the comforting realisation that I had, in my wisdom, arranged a pick-up to facilitate such a Herculean task. Not just any pick-up, you understand. It was the new, fifth-generation Mitsubishi L200 in top-spec Barbarian trim…I know, right?

It took all day, several haphazardly-balanced loads and at least a gallon of Yorkshire’s finest black-leaf tea, but the Mitsubishi performed its role perfectly; to shift stuff – loads and loads of stuff – calmly and efficiently, with ne’er so much as a cough. Me? I was pooped.

The Mitsubishi L200 has been a mainstay of the pick-up sector in the UK for years and the latest model is the best yet. Dubbed the ‘Series 5’ – its fifth generation – steady improvements have seen it remain as one of the most popular pick-ups on the market. 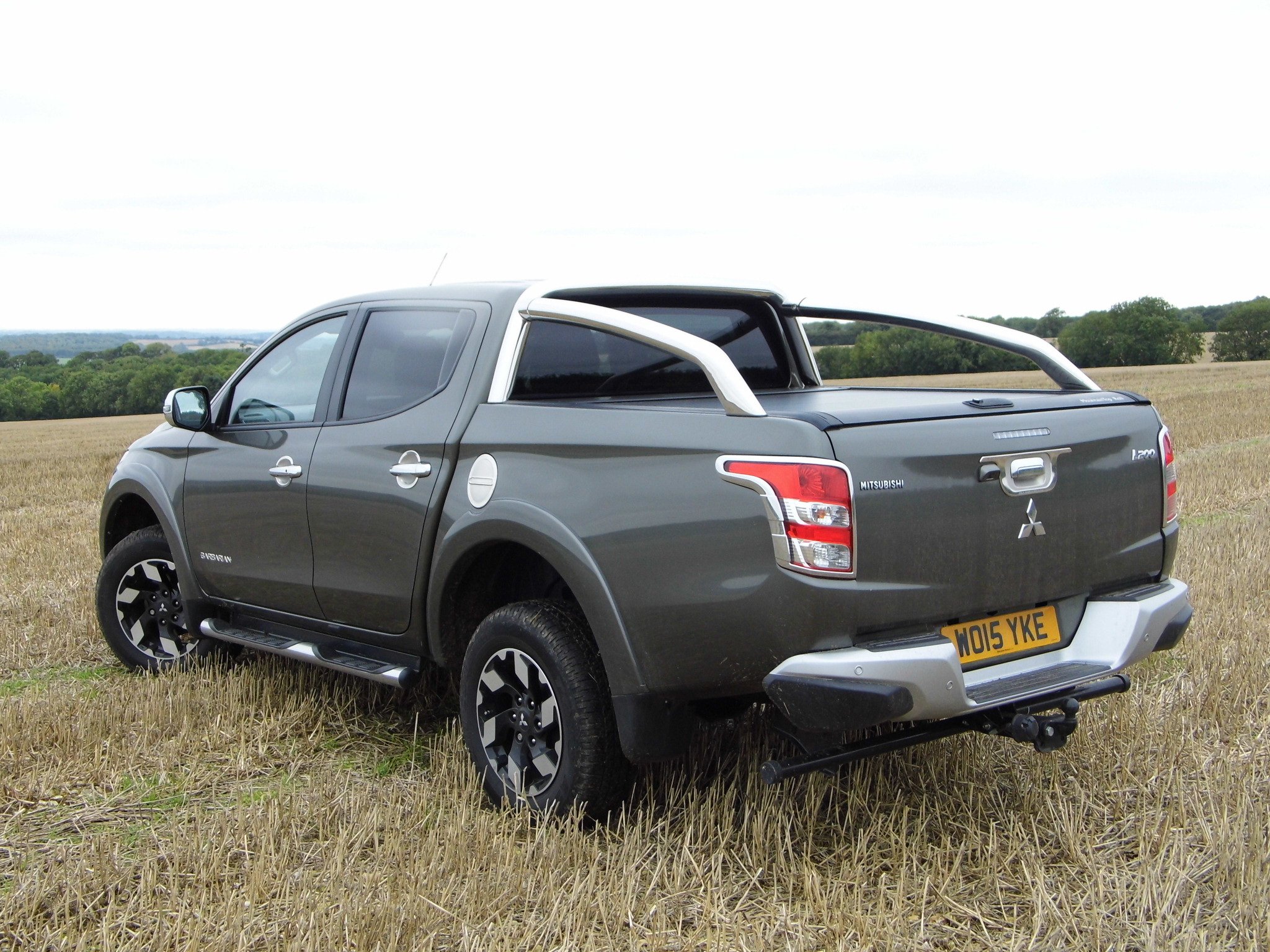 The Mitsubishi L200's stand-out feature has got to be the way it looks. Definitely not shy of a curve or two, the new L200 is littered with them. Unmistakably Mitsubishi, the front end is tamed with rounded edges for grille and headlamps, while oval recesses are reserved for the fog lights.

The rear edge of the cabin arcs down and around the vehicle's lower edge – the ‘J’-Line, according to Mitsubishi – while the fluid lines of the tailgate and windows are a world away from those on more boxy rivals. The Barbarian confirms its status as the flagship model in the range with a special body kit including a sports grille and almost everything else that’s screwed or bolted on swathed in chrome. The L200 Barbarian is fitted with Mitsubishi’s own intercooled 2.4-litre turbo-diesel engine offering 178bhp. It works and pulls exceptionally well but is characteristically chatty, especially when cold. Once warmed up, its full 430Nm of sweet, exploitable torque is available from just 2,500rpm which quickly arrives from the revvy oil-burner.

Venture off-road and four-wheel drive can be engaged with a twist of the Super Select 4x4 control, allowing the L200 to explore where many other pick-ups simply can’t reach. Stick to the tarmac and you’ll discover direct, albeit numb, steering and a composed ride. 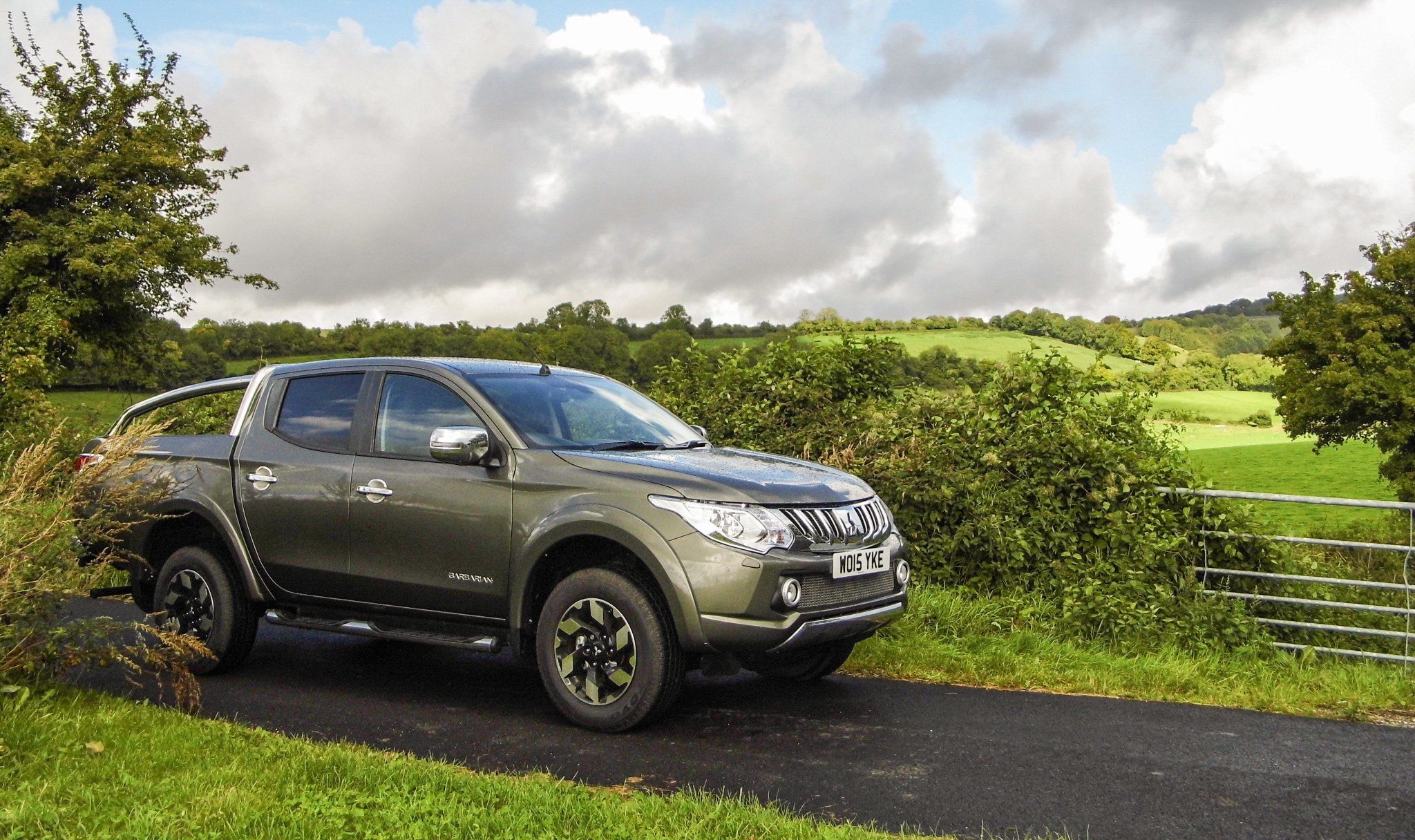 No matter what the marketing garb will tell you, it does NOT drive like a car. Sure, the L200 Barbarian feels as though it will withstand any amount of abuse off-road – but at the expense of the handling on the open road. The L200 has a pliant ride and handles cracked urban streets with ease. However, it struggles to cope with undulations in the road surface even at moderate speeds, with excessive bounce and yaw.

Slow steering coupled with more body roll than you would normally feel comfortable with, undermines the Mitsubishi on-road credentials.

A saving grace is the L200’s impressive turn of speed thanks to the new and powerful diesel engine. On the motorway, it’s easy to unintentionally break the law once the turbocharger wakes up.

Around town, the Barbarian is not at its best. You are constantly reminded of the size of the L200 and parking is made more challenging by poor front and rear visibility. The absence of parking sensors is odd, considering the Barbarian sits atop the trim grade line-up. Double cabs can be fairly touch and go when it comes to practical space for occupants. However, the L200 has good room for four grow-ups and a nipper in the middle of the rear row. For times when it isn’t doing business duties lugging chunky stuff around, the L200 can readily become a useful and practical family vehicle.

You climb up and into the L200’s impressive looking cabin and first impressions are good. The driving seat is comfortable and the upper and lower cabin both wear low-rent, utilitarian plastics, which is expected in a vehicle of this nature and is not at all out of place. Overall, it is spacious and practical with cubby holes, a gigantic glove compartment and lots of oddment storage.

The real practicality can be found in the load bay, which can be plastic or metal lined and have additional strap-eyes or any number of utility options added, depending on daily usage. The load bay has over a tonne of payload capacity in the ample rear load area, which accommodates a full-size Euro-pallet. The four-wheel drive transmission makes it a versatile vehicle with lots of towing and off-road potential. 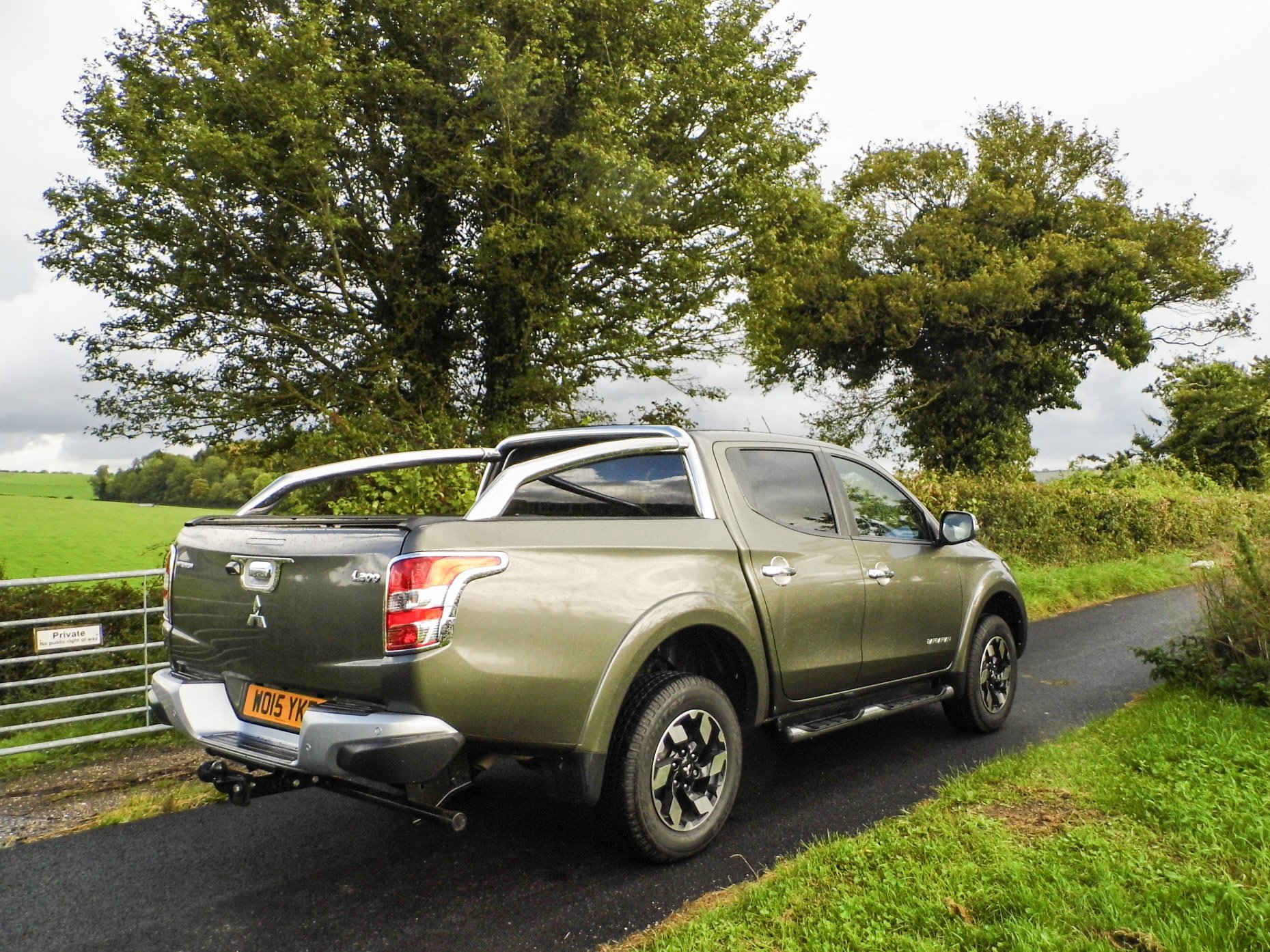 The L200 has a large 75-litre (19.8 gallon) fuel tank. In automatic guise as tested, it has a claimed mpg of 39.2 (official combined, unladen), which should realise a range of around 750 miles. I wasn’t far off that with a sub-par 35.4mpg during 411 miles of mixed on- and off-road driving in our week together. While economy can best be described as adequate, it’s in the more critical area of carbon-dumping that keeps the flag flying at 189g/km CO2, much improved from the 210g/km CO2 emitted from the previous model. 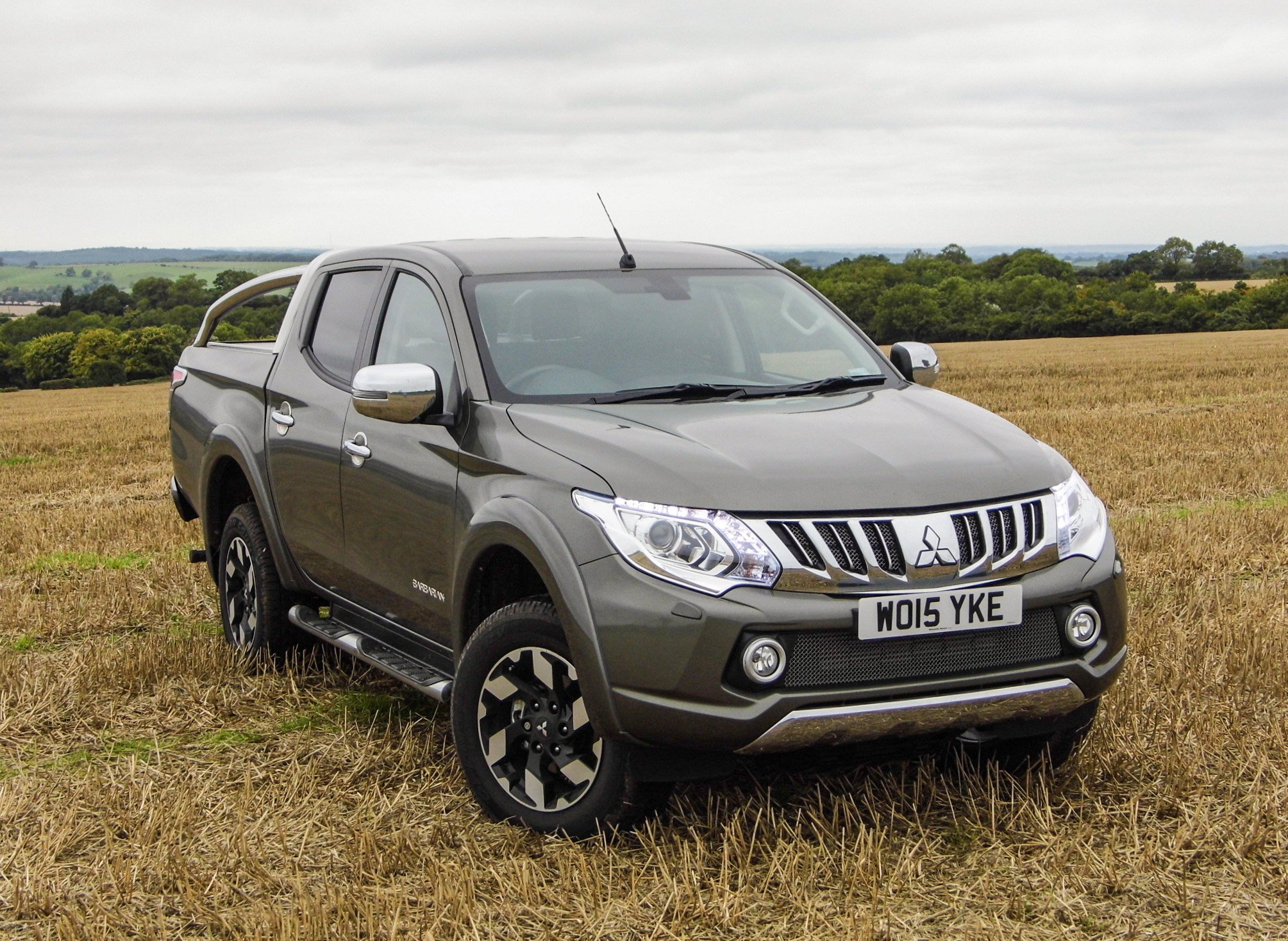 Far from perfect, but bursting with everyday practicality, there is an underlying feel of naïve, youthful honesty attached to the L200. Built to contemptuously dismiss a week full of Mondays, you just know it’ll scoff at any work-a-day abuse thrown at it and keep on doing so time after time.

The pick-up market has seen phenomenal growth in the last decade. Despite tough market conditions, pick-ups have been selling in impressive numbers. The Mitsubishi L200 continues to be a top choice amongst pick-up customers and the Barbarian derivative is no exception.

Take a look at our Mitsubishi L200 offers here

Continuing our month of electric and hybrid vehicle reviews we road te...