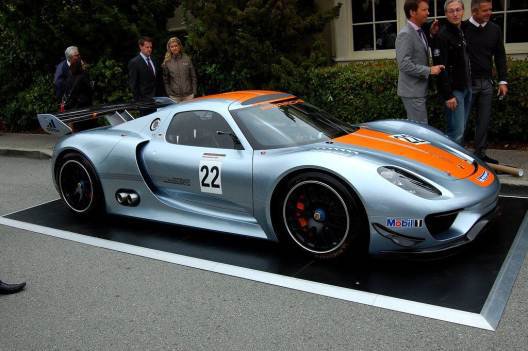 The Porsche 918 - As Driven By Chris Harris

In case you haven't heard, the Porsche 918 is something very, very special. It's the fastest road car in the world, going from 0-125mph in less time than the Porsche 944 takes to get to 60mph, and has a top speed of 216 mph. According to Porsche themselves, this petrol-electric hybrid supercar is the future of sports cars.

Ok, so it's fast. But why exactly is it so special?
British journalist Chris Harris was invited to drive it at Spain's Valencia Circuit at the end of last year and – you guessed it – he was very impressed.

It's the 918's combination of batteries, conventional combustion engine power and electric motors, but also the fact that it has not compromised on design, that makes it such a spectacular car. In fact, it has been optimised to deliver maximum performance at the same time as being extremely economical. Incredibly, this car burns roughly the same amount of fuel as a saloon car during standard on-road driving. Remember, this is a plug-in hybrid you could charge from home, if you wanted to.

The 918 famously lapped the Nurburging in just under seven minutes (6.57). This result is on par with its rival: the P1.

How does it feel to drive?

In his words a "mental machine", Harris admitted a preference to driving with the stability and traction control systems turned on. He found it a dream to drive, though, saying that the steering was a good weight and claiming he always had a good idea what was going on with the front axle. The traction, Harris said, is "pretty sensational" and the Michelin tires were very special indeed, with plenty of mid-corner grip. He went so far as to say he was "pretty speechless" about what this car could do, in terms of its composure, agility and the speed it carries. The brakes were also immense, he added.

When asking himself the rhetorical question: am I enjoying it? Harris answered, not surprisingly, "yes. I am".

See how you could save on a Porsche lease with us.