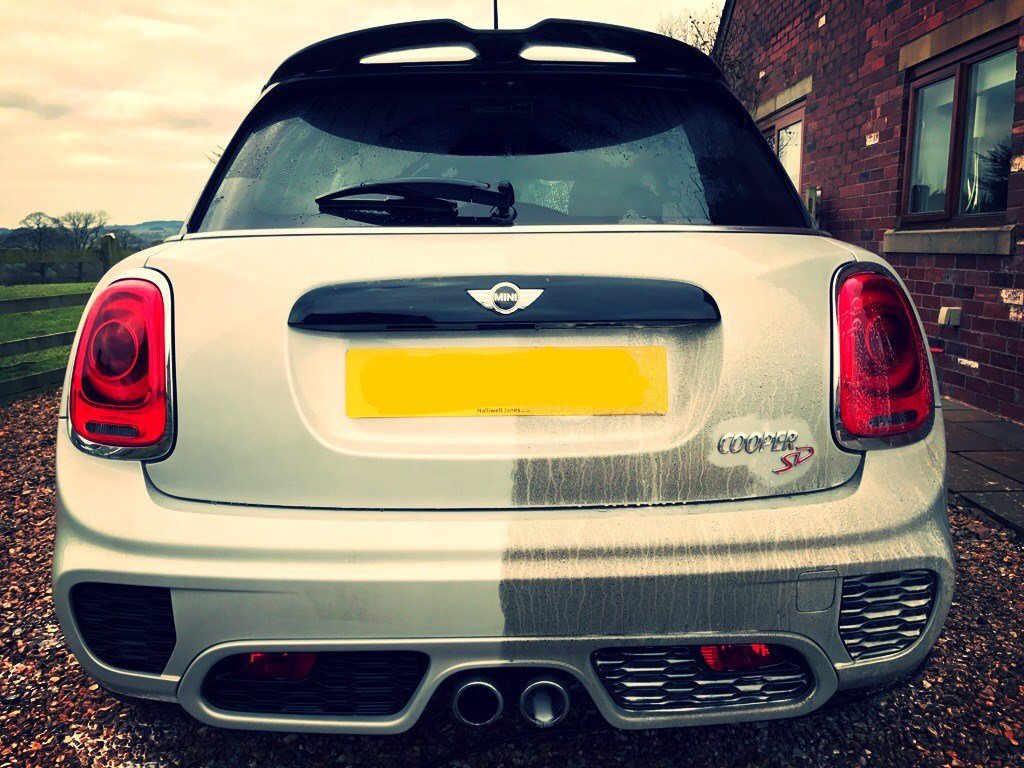 We took the Mini Cooper 5 door hatch on a long term review and found it had a bit of a split personality!

Between the three driving modes, the handling doesn’t really change. It is always sharp, precise and confidence inspiring. It comes to life on the country roads and truly brought me back to memories of go-karting. I found myself actively choosing country roads instead of using the A roads just because driving was ‘fun’. Importantly, the seats offer lots of support and hug you softly, something which is appreciated more when driving along those country lanes.

We had another Mini demo last year with smaller size alloys and it’s safe to say the ride quality differs massively. So if you want to go for the bigger alloys, much like our current demo, expect a harder ride. Personally, I thought the car had the perfect balance of comfort, ride quality and handling, which I was delighted to experience on my 72 mile commute to work.

With the emphasis on handling combined with the almost vertical windscreen, I was expecting some tyre and wind noise. However, this wasn’t the case as the cars refinement was very impressive especially cruising on the motorway. 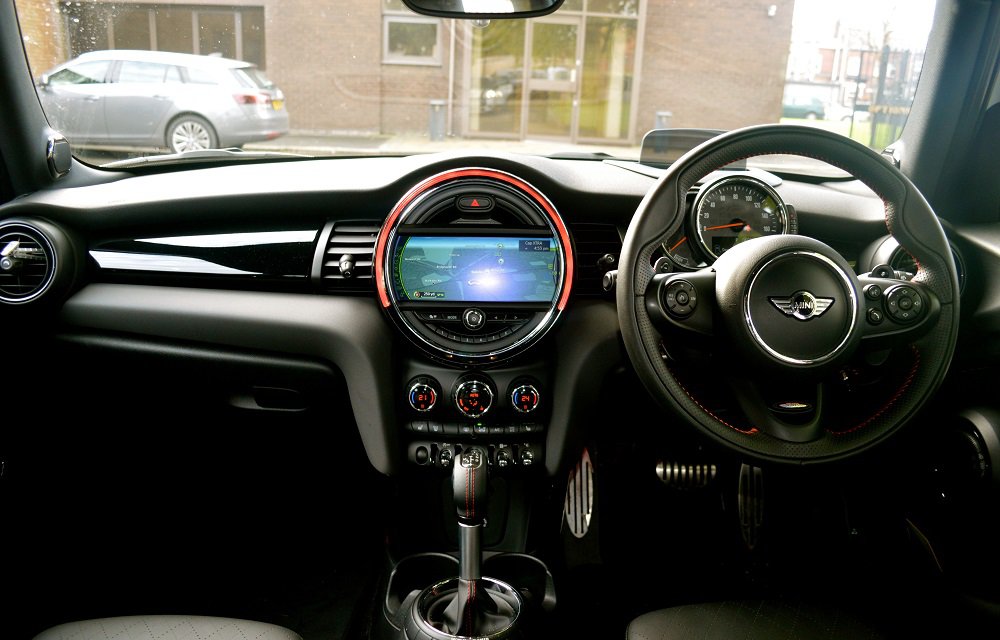 Technology is a huge strong point for the Mini, sustaining the biggest improvement from the previous models.  The model we had came with the media pack which includes an 8.8 inch central widescreen (which is controlled by a rotary dial) and shortcuts located in between the front seats. Having said that, when the armrest is down, it proved almost impossible to reach. However it makes up for this by being the most intuitive, easy to operate and high definition system I have ever used.

The head up display is also another lovely perk. Whilst it isn’t like the luxury cars which project the dial into the distance in your eye-line, the Mini uses a glass screen which pops up from the dashboard. It projects speed and navigation instructions in colour which is extremely useful when travelling on the motorway and I never found myself looking down at my instrument cluster, instead using the head up display instead.

Mini have paid close attention to a couple of small details which make the car really funky. From the LED lights around the 8.8 inch central infotainment screen, to illumination of the stereo when you change volume and red lights appearing when the climate control is changed to a hotter temperature, it all adds to the atmosphere and sense of occasion when driving. 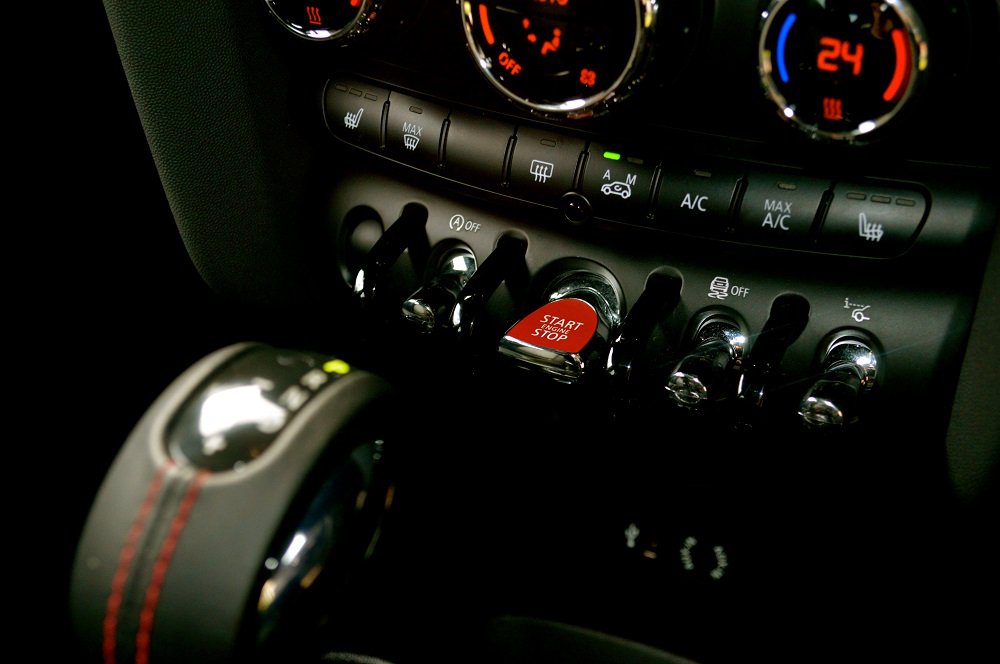 The model I got my hands on was a 2.0 litre diesel engine; yes, you heard me correctly. The car has a sublime automatic sports gearbox and reaches 0-60 in 7.3 seconds. This speedy hot hatch is claimed to be incredibly fuel efficient, reaching 67.3MPG. So far, I have only seen a maximum of 62.1MPG driving incredibly carefully, whilst the over the whole time I drove the car it averaged 53.4mpg. However, when the car is driven in eco mode and at a steady pace on the motorway, I have no doubt that the car is capable of reaching its claims.
The driving modes really does transform this car. It is like driving a split personality. When in eco mode its extremely sluggish and slow, then switch the trigger to sport and it is like a pocket rocket! The engine constantly wants to rev and is happy to red line which is rare for a diesel. 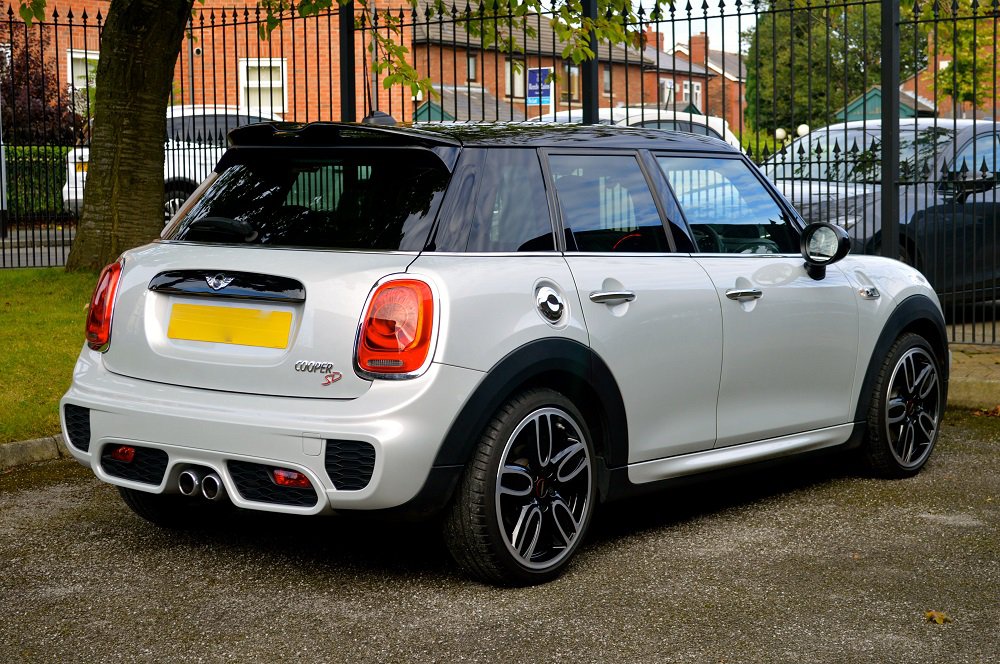 This Mini is actually not so ‘mini’. It’s more like a Mini on steroids, which has magically made it grow another pair of doors. The cabin space is very impressive, easily fitting 4 adults. Granted, as a man over 6ft, it wouldn’t be my choice to sit in the back for long journeys. Although my knees were comfortable and head room was ample even when sat very upright. In the front, there is plenty of space for both the driver and passenger. This combined with a huge amount of rake and reach on the steering wheel, makes finding the perfect position easy for an individual.

Door bins in the front are large and contain two nicely sized cup holders. However, beyond this, the goodness comes to an end. The boot is almost non-existent, so forget trying to fit a suitcase or pram in there! 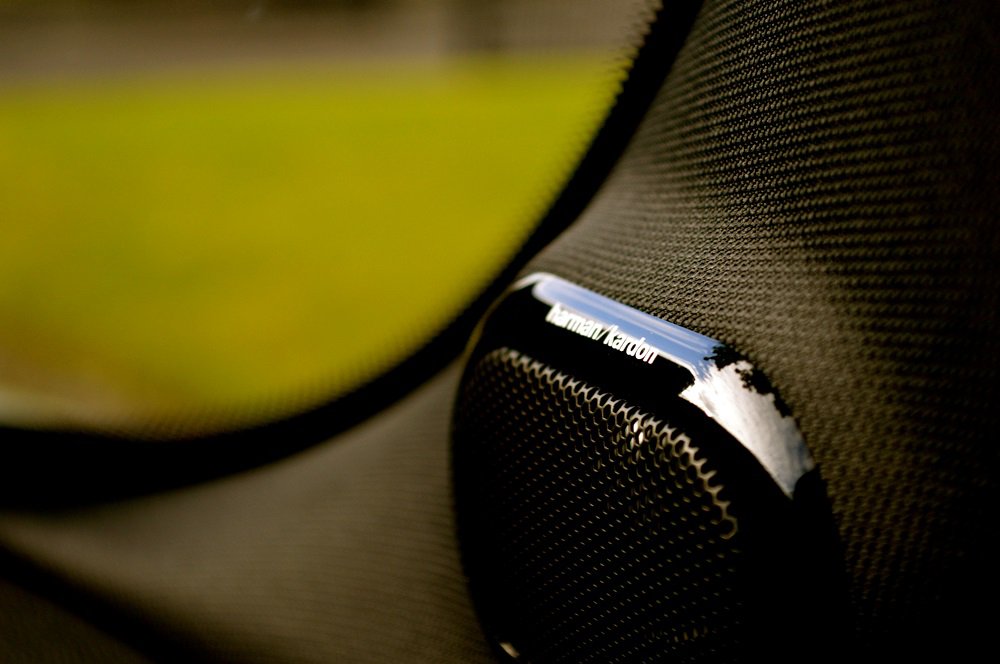 WARNING, do not get carried away. We were lucky that our demo came with such a high specification. An automatic gearbox, JCW chilli pack, head up display, Harman Kardon stereo, leather seats, the list goes on. Having now experienced these extras, I wouldn’t turn back and would recommend them highly to anyone thinking of buying the model. THE JCW Works Chilli pack is a costly option at £3800 but with this comes with a body kit, bigger alloys, LED headlights, a JCW steering wheel, excitement pack and driving modes. This extra really does turn heads, both inside and outside the car.

The only issue I found was that the tyre sensor sometimes came on and off rather than being constant.

The Mini continues to prove that compact models are extremely versatile, from being sporty and fun to accommodating a family. Like all great Minis it’s amazing to drive, well-built and packed full of fun. You can personalise each car to you, but beware; it’s easy to get carried away and before you know it, the price can absolutely sky rocket! I have loved driving the 5-door hatch and it has impressed me with its versatility and usability as an everyday vehicle. I would argue that it’s in the top 3 for best all round hatch if boot space isn’t an issue.

Is the latest Mini Convertible the most fun you can have on the road?