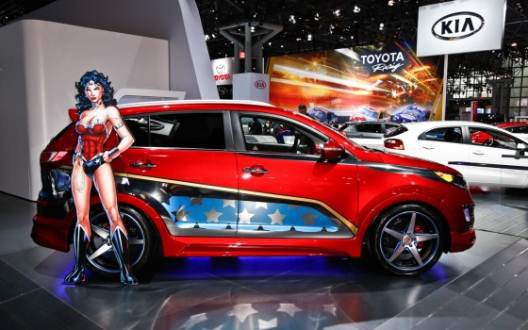 Making its debut at The New York Motor Show was the Wonder Woman inspired Kia Sportage. Now for us here in the UK, a Kia inspired Kia Sportage would have done the trick, what can we say? We’re easy. But not for our counterparts across the pond, oh no, as the second largest Korean automakers Kia had added a little spice to the mix when they created their new Kia Sportage. And for us, it may be a first; laying our eyes on a comic book character inspired car but according to our research this was far from a novelty for the Americans. Word is, there has been a whole fleet of DC Comic’s Justice League inspired Kia’s. We kid you not. The earlier fruits of Kia labour include a Batman Optima, a Flash Forte Koup, a Green Lantern Soul, Aquaman Rio, Cyborg Forte and a Superman Optima Hybrid. Only in America huh? However, contrary to what the world of comic book fandom may lead us to believe the comic book inspired Kia’s have actually been created to raise awareness for the DC Entertainment’s ‘We Can be Heroes’ relief campaign, which was created to bring aid to those who were affected by the food crisis in the Horn of Africa. Kia America’s executive vice president of marketing and communications, Michael Sprague, was reported saying “The Wonder Woman portrays an impressive balance of power, agility and confidence, all of which are inherent characteristics of the Kia Sportage crossover”. Now for any of you UK based budding hard core comic book enthusiasts, the Kia Sportage is unfortunately only available in Kia’s native Korea and America. Nevertheless here at Leasing Options we have an extensive range of cars that come in an array of models and styles that are sure to compliment your flair however daring, classy or introverted it may be. So whether it is a business contract hire car or a personal car lease you are looking for, give us a call today on 0161 826 3877 or alternatively visit our website and browse through our car leasing models.

So whilst here in the UK we were savouring the long Easter weekend...

This lad looks a little hefty and heavy, doesn’t he? The Sorento...

The Hills Are Alive…..

This is the Kia Cadenza model for the 2014 season. Just feast your...