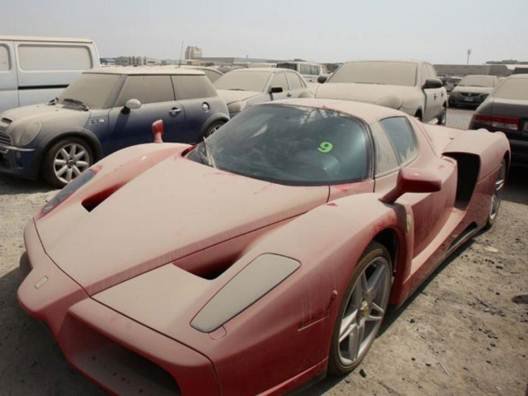 Here at Leasing Options we always like to delve into some kind of motoring trivia.

Not just talking about the release of new cars, concept designs and vehicle leasing deals we offer daily, we love to discover interesting motoring stories from around the world.

Here's one for you...Did you know that in the United Arab Emirates, getting into debt is punishable by a jail term? Under Sharia Law, not paying your debts is a serious offence!

So, many business owners, investors and executives who move out to Dubai to experience the oil driven boom, only to take out loans and finance for luxury cars and high lifestyles to keep up with the 'Joneses', are left in awkward trouble when their bubbles begin to burst.

The result is as many as 3000 cars a year, many of which are highly desirable luxury vehicles are abandoned, either on the side of the street or in airport carparks, many still with the keys in the ignition. I mean, we are talking about Bentley Continentals, Ferrari's, Lamborghini's, Porsche 911's, AMG Mercedes-Benz SLS's and much more!

These poor vehicles are simply left by their owners; some Arab and some Expatriates, who make a fast getaway to avoid a length stretch! Once impounded, they wait patiently for their owners to come back, before being recycled or auctioned off. And how much for? Believe us when we say pennies to the dollar...

We discovered this Auction site at emiratesauction.com/en/Cars/OnlineAuction.aspx, where cars such as a 2010 BMW 530ia are auctioned off for the equivalent of a few pounds shy of £3,500. A 2014 Peugeot 301 is currently being auctioned and is at £628.44 with 10 days left on the auction, offering a great purchase for those last minute savings.

Although almost all of the vehicles listed here have covered considerable miles, often over 100,000 km because of how cheap fuel is in the United Arab Emirates, the fact is that these cars will have been regularly serviced and that means they'll be good for at least another 100,000km.

So if you want to grab yourself a bargain, just remember two things:

1. All vehicles bar a couple of examples will be left hand drive, and

2. you would need to arrange the transportation of the vehicle back to the UK or your chosen destination.

All in all, there are bargains to be made and for just a few thousand pounds, you too could be driving a £60,000+ car that isn't older than 4 or 5 years old....sounds tempting doesn't it?