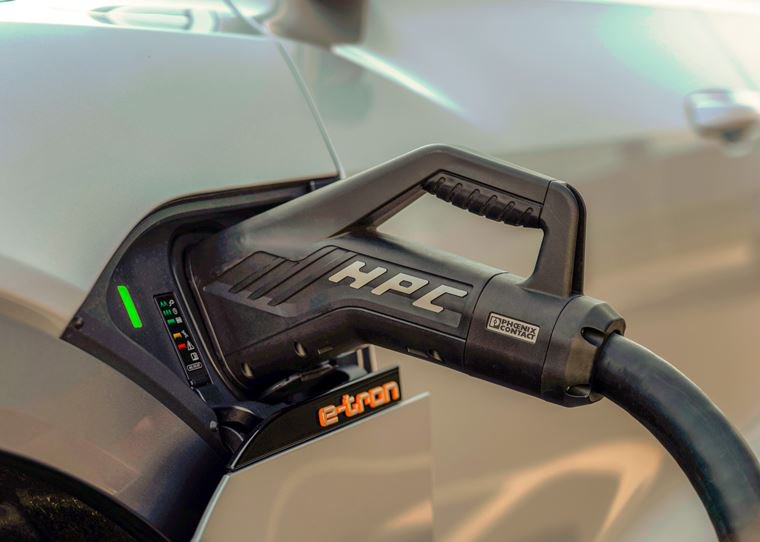 With its e-tron and e-tron Sportback models, Audi is making electric mobility a reality for long-distance driving – thanks in part to a charging curve that is unique in the competitive environment. 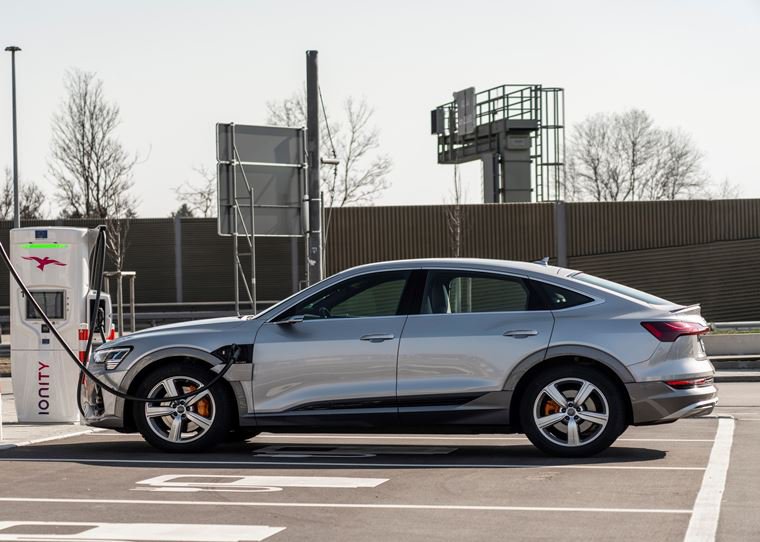 Most recharging of an electric car generally occurs at home or at work. In either location, the charging time doesn’t have much significance. By contrast, on a long-distance journey every minute counts and fast charging is essential. After a brief break, the car should be ready for the next stage again. Because of this, many customers focus on the maximum charging capacity of their electric car to assess the charging characteristics – but this is of only limited use if it concerns quick refuelling of range at a fast charging terminal. 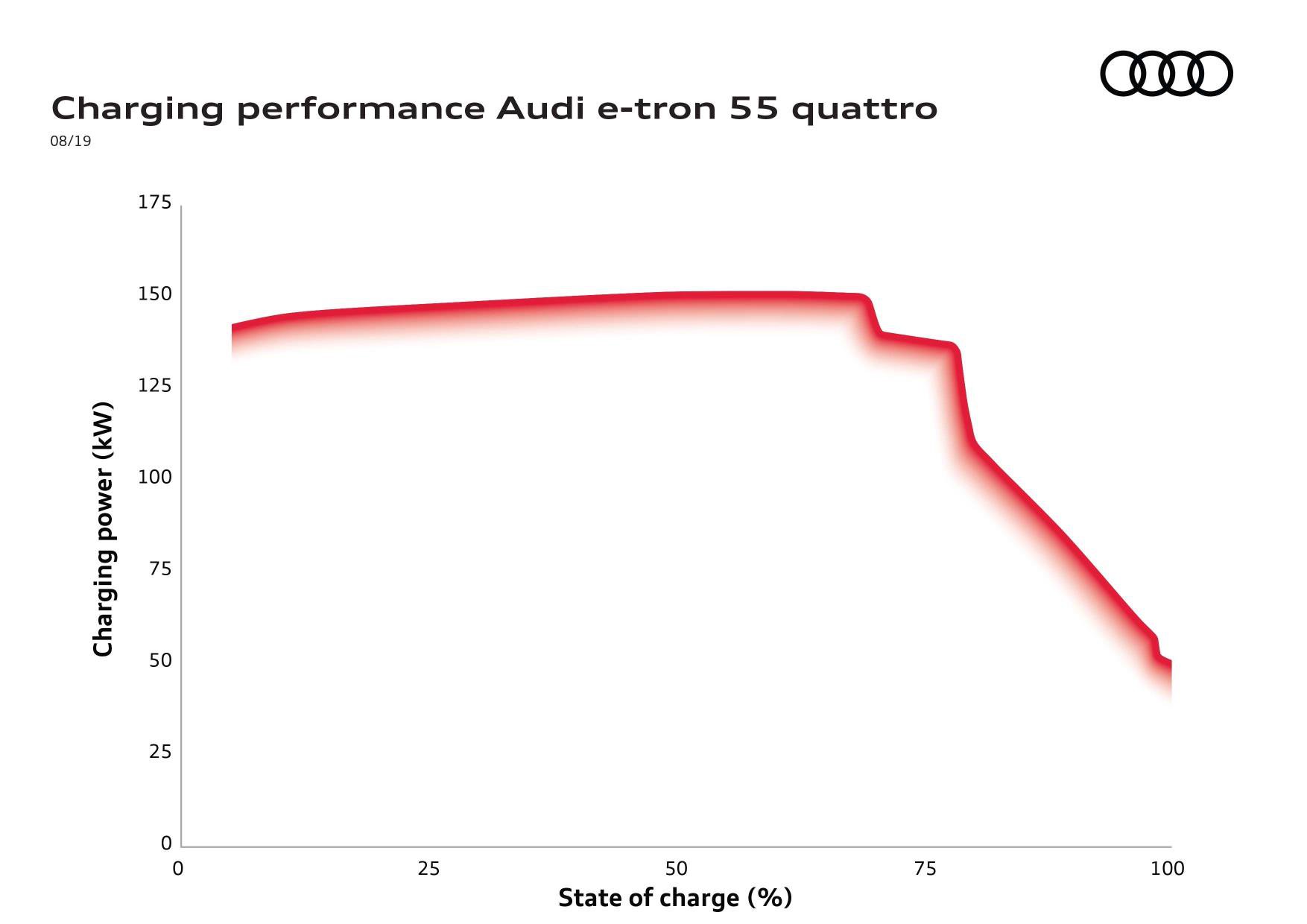 High charging speed (kWh / minute recharged) over the entire charging process is essential for a short charging duration. In other words, a high charging capacity must be available for as long a period as possible. Audi’s e-tron models with their continuous output impress with precisely this property.

In the current competitive environment, the Audi e-tron takes the lead with a high-performance charging capacity even if there are already models on the market with a nominally higher output.

The difference is in the details: The ability of the HPC (High Power Charging) fast charging to provide the highest possible output at the charging terminal is of course a prerequisite, but it is not the most crucial factor. 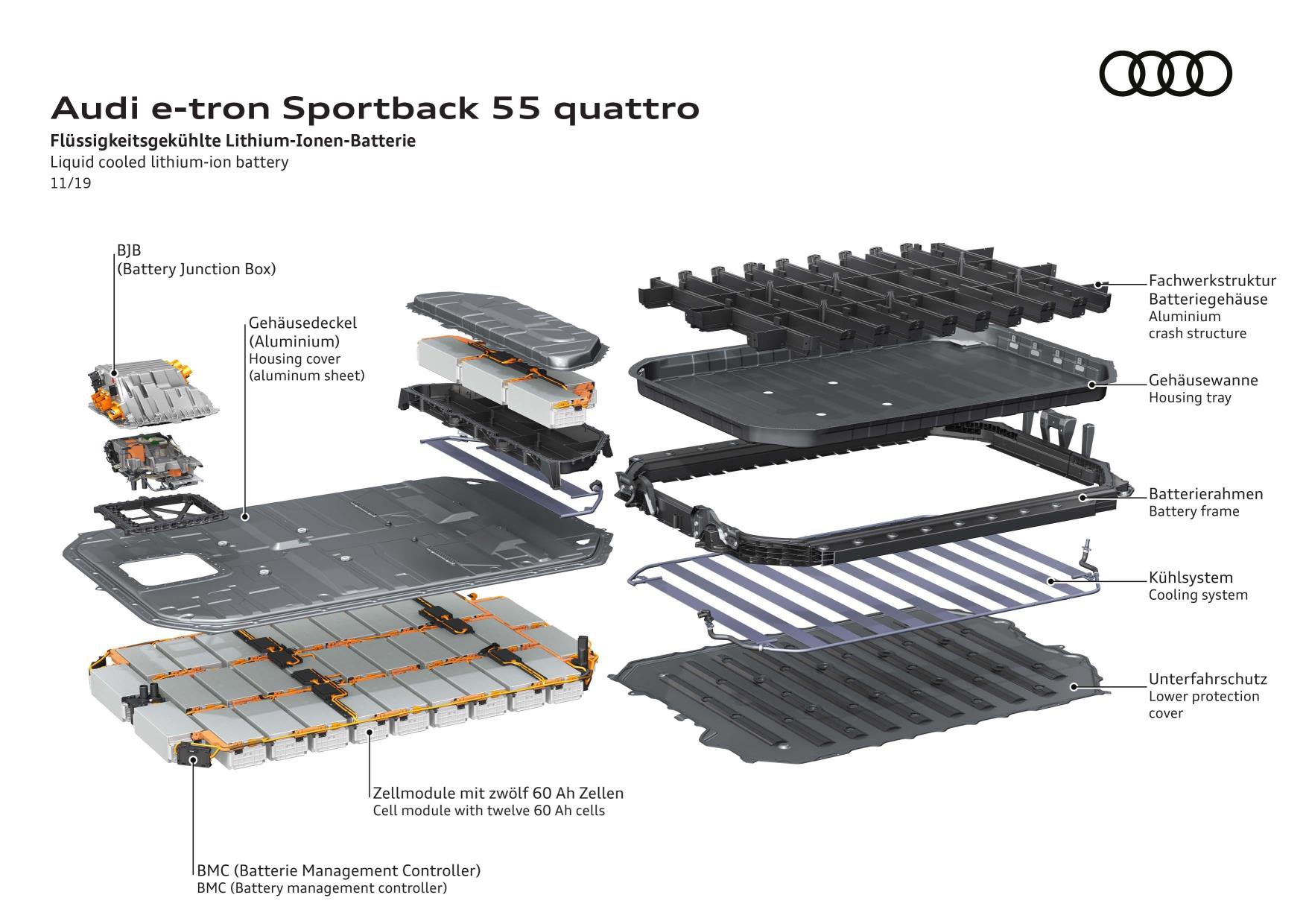 A high current consumption on the part of the battery for a large portion of the charging process is just as important. However, if the car charges with maximum output over a relatively short period and needs to lower its power early, the charging speed will also simultaneously reduce – i.e. battery capacity recharged per unit of time.

Thanks to an ideal charging curve with maximum output available for a long period of time, the charging speed is the more substantial criterion when it comes to charging performance and, ultimately, it guarantees a short charging time. As well as the average consumption, it also depends on how much range can be recharged on average over a defined period, for example within ten minutes. 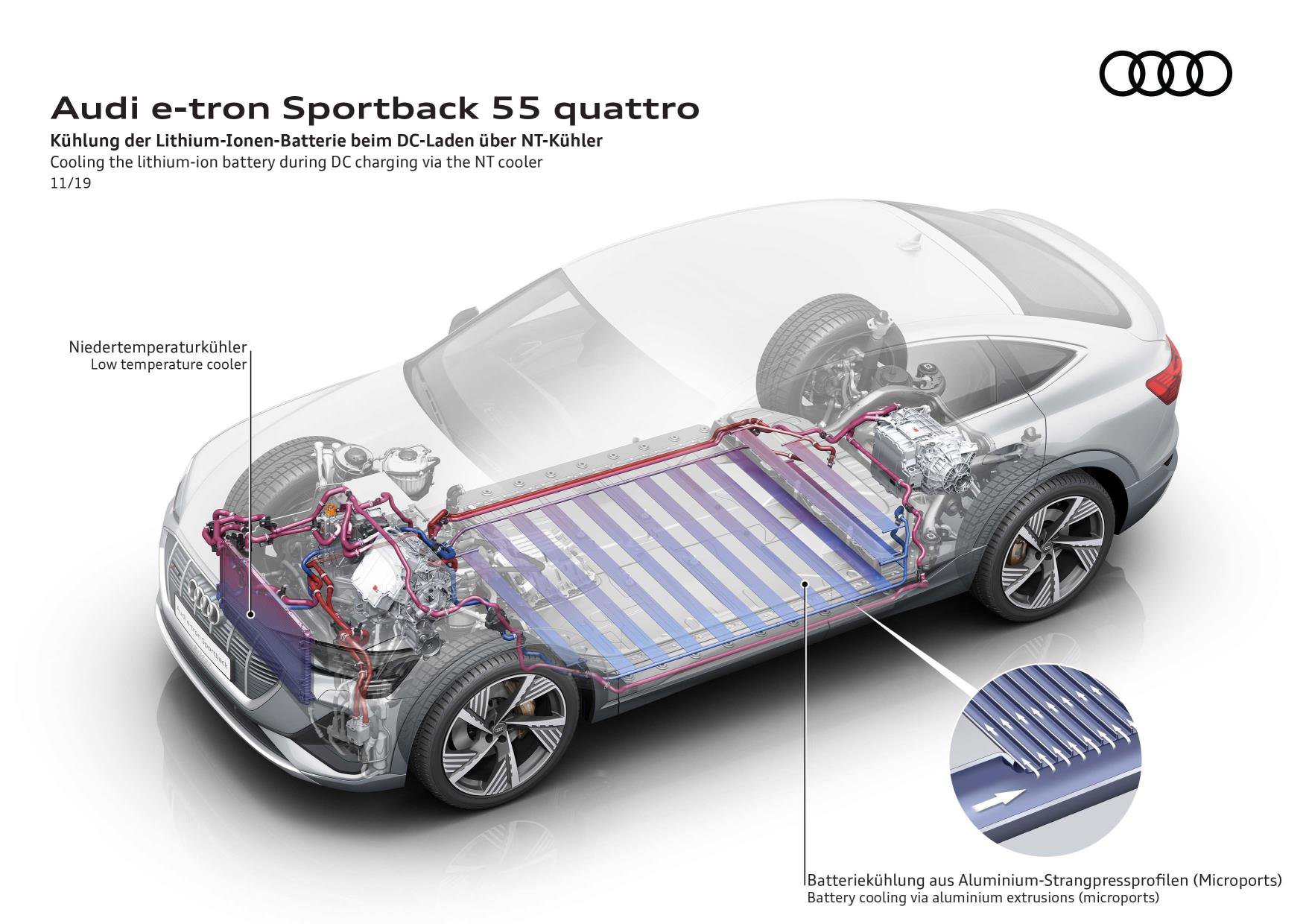 It’s the charging curve that makes the difference

When it comes to the charging curve, the Audi e-tron 55 plays to its advantages: The curve of an HPC terminal with 150kW output stands out at a high level thanks to its continuity. Under ideal conditions the car charges between 5% and 70% state of charge at the threshold of the maximum output before the intelligent battery management reduces the current. A major difference from other concepts, which normally only reach their full output for a short time – at the ‘peak’ – and lower their power considerably before reaching the 70% threshold.

On a day-to-day basis, this means an elementary advantage: For a range of around 68 miles, the customer ideally spends just under 10 minutes at the charging terminal. The Audi e-tron 55 reaches the 80% mark after approximately 30 minutes. Even though it takes much longer, for technical reasons, to fill the remaining 20 percent of a lithium-ion battery, fully charging (5% to 100% state of charge) at an HPC terminal takes around 45 minutes – an everyday advantage in the competitive environment. 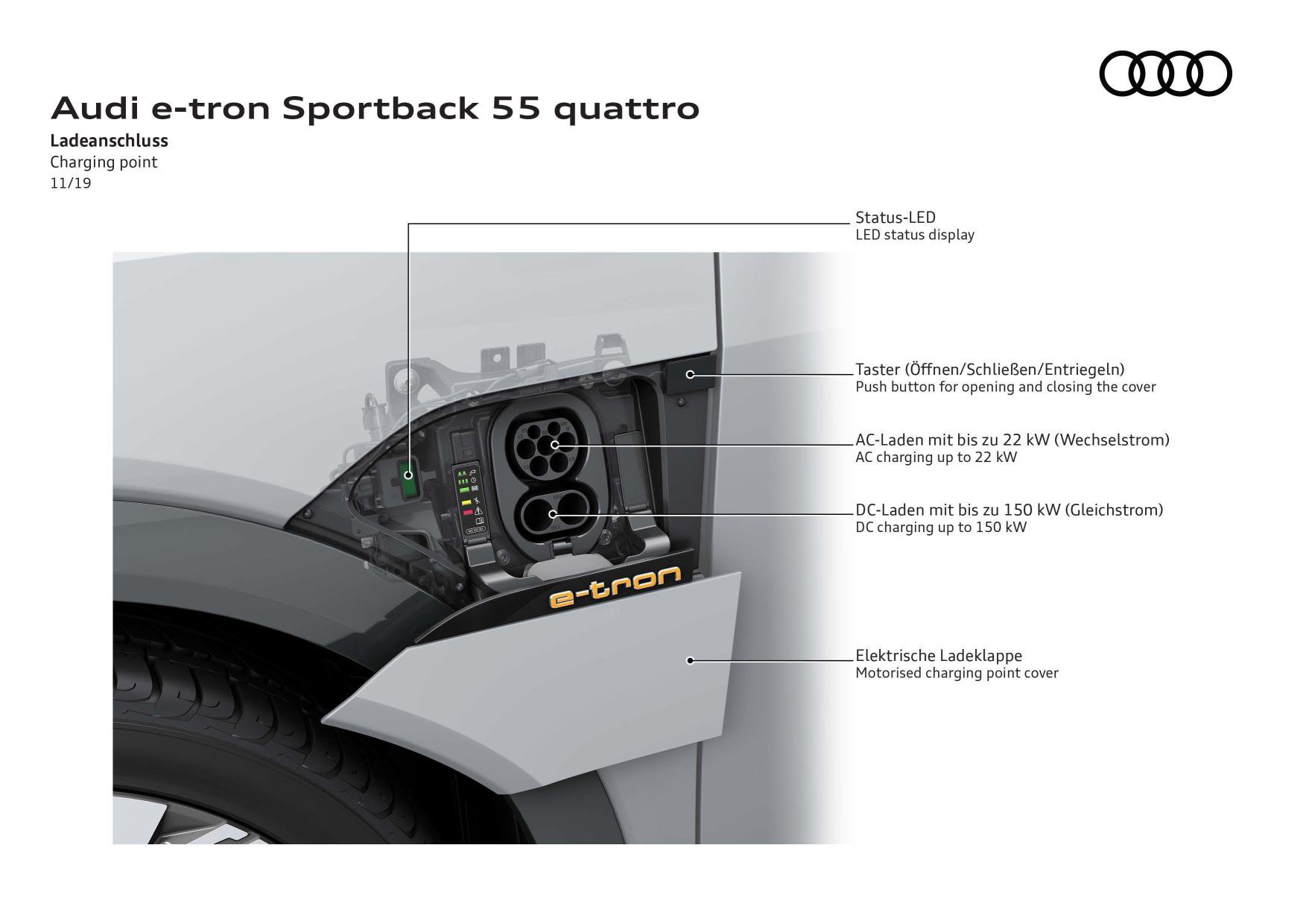 The lithium-ion battery of the Audi e-tron 55 has a gross capacity of 95kWh (net 86.5 kWh) and has been designed for a long life cycle. Its elaborate thermal management system forms the basis for balanced performance and durability. Liquid cooling ensures that the battery’s temperature remains in the optimum range of 25 to 35 degrees Celsius, even at high stress levels or low exterior temperatures. Twenty-two litres of coolant circulates in the total of 40 metres of cooling lines in the four coolant circuits.

During DC charging with 150kW, cold coolant takes away the heat that occurs as a result of electrical internal resistance in the battery. The core of the cooling system is made up of extruded profiles – visually comparable with a slatted frame – which have been affixed to the battery system from below. A newly developed, thermally conductive adhesive joins the cooling unit to the battery housing. 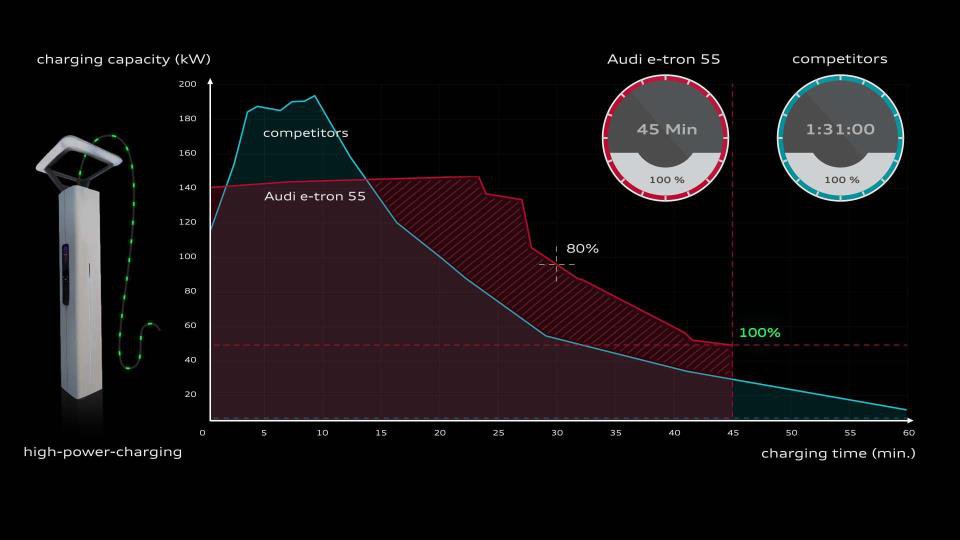 The gap filler forms the contact between the housing and the cell modules placed in it. This filler is a thermally conductive gel that fills the space to the housing beneath every cell module. The gel evenly transfers the waste heat produced by the cells to the coolant via the battery housing. The spatial separation of elements and battery cells carrying cooling water also increases the overall system’s safety. An additional positive side effect of this elaborate design is the high resilience in the event of a crash.

As lockdown has begun to ease, the Government is keen to support car...