Fully Invested: Who’s Investing The Most In Driverless Technology

Every year, more and more money gets invested into driverless car technology, with car manufacturers and other large companies both banking on this being the next key technology that’ll shape the future of motoring.

Here at Leasing Options, we’ve been keeping an eye on this particular corner of the motoring sector for a while now. Back in November 2018, we took our first delve into driverless technology investment with our driverless campaign, which looked not only at the investment side of things, but also how the general public perceived the technology and which companies, at the time, looked set to deliver the first driverless cars on mass and when.

Fast forward to today and we thought it was about time to revisit this topic to see how things have evolved over the last few years, and in short, the answer is quite a lot!

How Much Has Been Invested In Driverless Technology, Total?

Back in 2018 when we first looked into driverless investment, it was estimated that around $40 billion had been spent on this new technology. Now, just shy of three years later, that figure has increased to nearly $44 billion.

Which Companies Have Invested The Most In Driverless Technology? 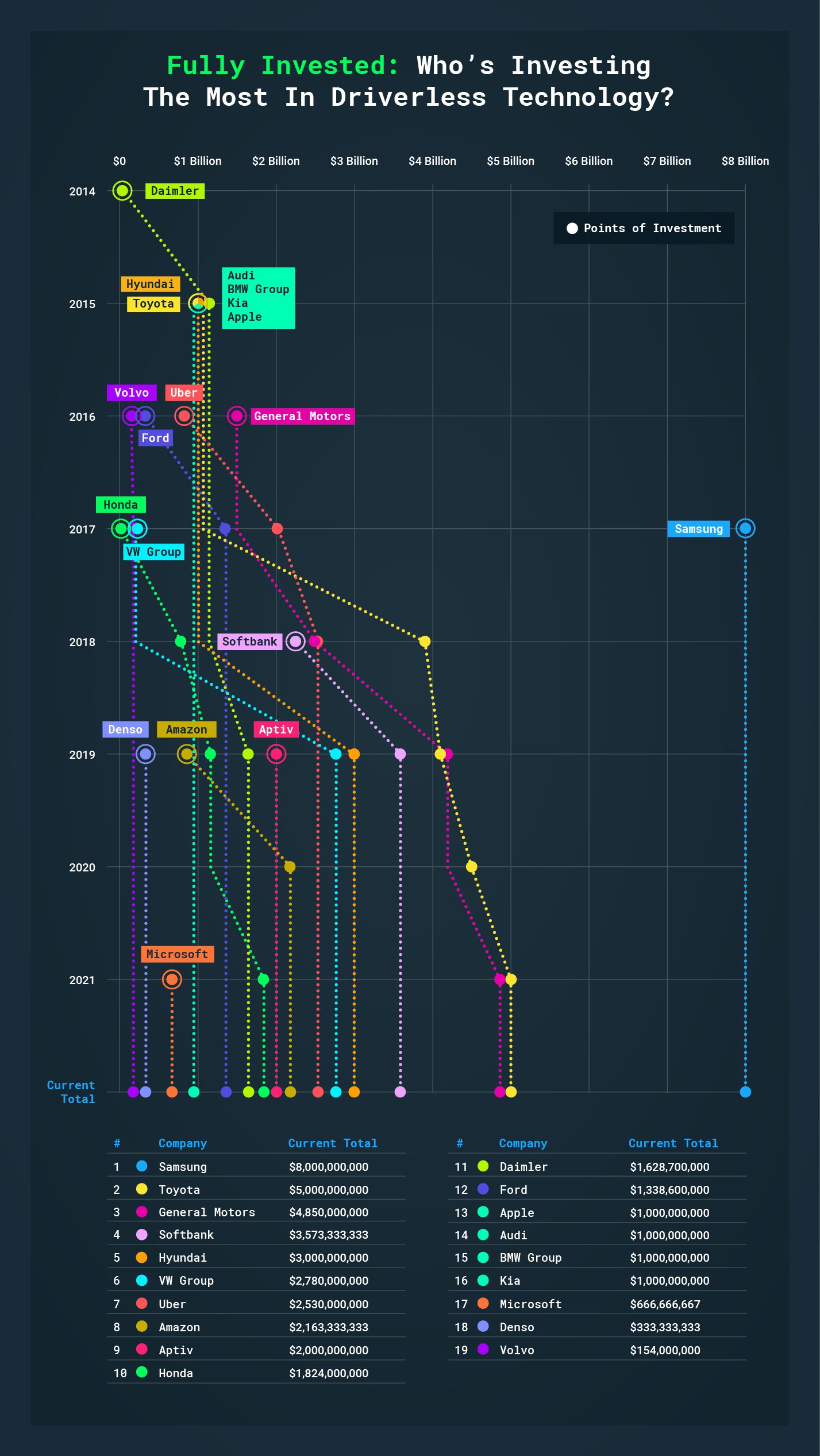 Despite multiple billion dollar investments since 2018, individual car manufacturers still haven’t invested as much as tech giant Samsung. Samsung remains the largest spender to date after its acquisition of U.S. car infotainment and audio company, Harman, for $8 billion towards the end of 2017 / start of 2018 which was declared as a strategic initiative to develop connected-car technology.

Aside from Samsung, the biggest spenders from the motoring industry are Toyota and General Motors, spending huge amounts on their pursuit of driverless technology. Toyota, currently in 2nd behind Samsung, has invested a total of around $5 billion over the past six years with their biggest investment coming in 2018 when they dedicated $2.8 billion to start a new company called 'Toyota Research Institute-Advanced Development' (TRI-AD).

General Motors, who are close behind in 3rd, have spent a total of around $4.9 billion since 2016 with their biggest investments pushed towards ‘Cruise’, their own self-driving division.

Samsung isn't the only non-car manufacturer making waves in the driverless space. Softbank, a Japanese multinational conglomerate holding company based in Tokyo who primarily invests in companies operating in the technology, energy, and financial sectors, is chasing the leading pack, spending close to $3.6 billion in total with recent investments in ‘Nuro.ai’, a robot delivery vans business, and also into GM’s Cruise division.

Who Has Invested The Most Since 2018?

In 2019, out of nowhere, Amazon joined the race with their first big investment in driverless technology when they invested in Aurora, a self-driving car start-up, and then dropped $1.3 billion with the acquisition of another self-driving start-up, Zoox.

Another surprising turn of events was from Toyota. The Japanese manufacturer, who invested early in Uber, decided a few years later to also buy Lyft’s autonomous car division for $550 million, standing the Japanese car maker in a great position in the race to first on-mass driverless vehicles.

We’ve seen a few manufacturers team up before but none quite as big as Volkswagen investing $2.6 billion in Ford’s Argo AI start-up, as we touched on before. As we all know, VW and Ford are two of the largest car manufacturing companies in the world, so this alliance could cause trouble for the likes of Toyota and General Motors who, at the moment, seem streets ahead of their competitors. Perhaps, not for long.

Who Is Being Left Behind?

BMW to date have spent a total of around $1 billion since 2015, with their biggest investment being when they, along with Audi and Daimler, purchased Nokia's 'HERE' digital mapping unit. Since then, it’s been relatively quiet from the German juggernaut.

Volvo made their first driverless investment in 2016 when they partnered with Uber to develop driverless cars in a joint $300 million deal. After this however, there’s been little movement from them.

Perhaps one of the more surprising of the manufacturers being left behind is Ford, who many predicted to be leading the charge after early investments. Not having invested anything into the market since 2017, Ford will be hoping their ‘Argo AI’ investment pays off in the long run.

As you can see, there’s been a lot of movement since our last deep dive into investment into driverless technology. Before, it looked like Samsung was going to dominate the space but since then multiple companies have closed the gap and, if things keep trending in the direction we’re seeing today, it may not be long until one of either Toyota or General Motors catch up. Perhaps Amazon, the dark horse in the race to driverless technology, will be the leaders by the time we do our next deep dive? We’ll just have to wait and see.

Here at Leasing Options, we’re excited about this push towards driverless and what it’ll mean for car leasing in the future. Make sure to keep an eye on the news section of our site for more on driverless investment as well as our guide section for all the answers to your car lease questions.