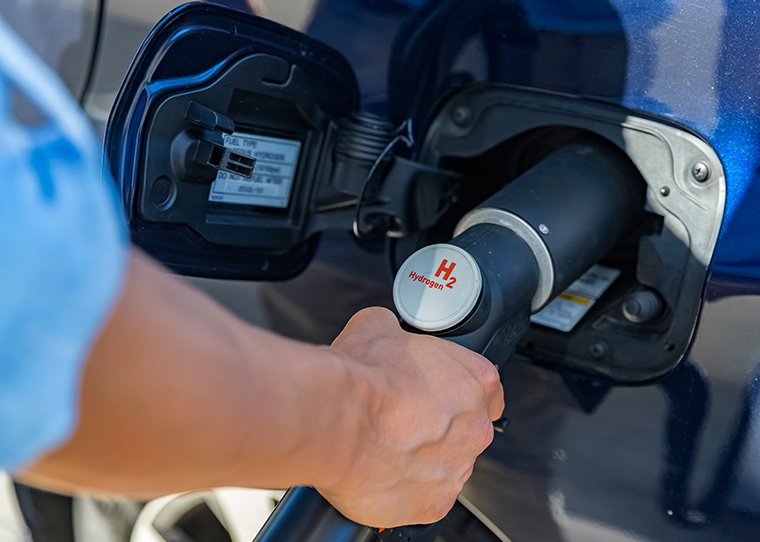 With the UK Government planning to ban the sale of new petrol and diesel vehicles by 2035, there is growing interest in the alternatives on offer. Aside from battery electric, hydrogen is one of the most viable alternative fuels.

But how exactly does it work? Are they environmentally friendly and cost-efficient? And what hydrogen cars are on offer? Read on, as we answer all of the key questions about hydrogen cars. But first…

What is a hydrogen vehicle?

Broadly speaking, a hydrogen vehicle is any vehicle primarily powered by hydrogen. However, in most cases, this refers to hydrogen fuel cell vehicles. While Mazda developed the RX-8 Hydrogen RE back in 2003, which used hydrogen in an internal combustion engine, fuel cells have become the more common option.

How does it work? The remaining protons, electrons and oxygen are combined in the cathode to produce water. The water and excess heat are the only by-products of the process, making the actual power generation of hydrogen fuel cell cars emissions-free.

The electric current produced by the fuel cell’s anode is then used to power an electric motor much like a battery electric car.

Are hydrogen cars available on the market?

LeasingOptions currently offers the Hyundai Nexo Estate. To find out more, please contact our team on 0161 826 9716 who can discuss the latest hydrogen car lease deals we have.

The existing hydrogen cars are expensive. The whole process of extracting hydrogen is complex and expensive so has a knock on impact on the overall cost of the car.

Are they automatic or manual?

One of the key questions with hydrogen – as with any alternative fuel – is whether it pollutes. At the driving level, the answer is no. However, there are some issues when it comes to the production of hydrogen to use in fuel cells. The vast majority of hydrogen is produced by steam methane reforming, emitting carbon dioxide as a by-product.

On top of that, there is the challenge of transporting hydrogen to fuel stations. Unlike electricity, which is simply available through the national grid, hydrogen would need to be distributed and stored across the country, which results in further emissions overall on the behalf of hydrogen cars.

As an alternative, hydrogen can be produced using pyrolysis or thermochemical water splitting. This method uses high heat to separate hydrogen from other elements, which can be powered by renewable energy to make hydrogen production clean. However, at present, this method is impractical due to the high costs involved.

How much does it cost to fill a hydrogen powered car? How much does it cost to fill a hydrogen powered car?

The average cost of hydrogen fuel stands at around £10 per kg in the UK. The fuel measured in kilograms rather than litres because it is a gas rather than a liquid. With the tank on hydrogen cars varying from 4.1kg on the Honda Clarity to 6.3kg on the Hyundai Nexo, it will typically cost between £40-70 to fill the car.

Based on research by the Evening Standard using a Toyota Mirai, that full tank (4.7kg) will get you around 270 miles. Compared to a standard petrol saloon at 40mpg, they work out that the hydrogen alternative will cost around 10% more.

However, one of the more salient issues is where you can fill them. At present, there are only 16 fuel stations in the UK where hydrogen is available. With half of them located in the south east of England, that makes it a bit impractical for drivers in other locations. What is the range of hydrogen vehicles?

Both the Mirai and Nexo will set you back over £60,000 brand new, with a few differences to choose between. As a crossover SUV, the Nexo offers a larger fuel tank capacity of 6.3kg, compared to the smaller 4.7kg on the Mirai – a saloon – which could come in particularly handy given the current lack of fuel stations.

With the Nexo, you also get slightly more torque (291lb-ft versus 247lb-ft on the Mirai) and higher bhp (161 compared to 152 on the Mirai). However, that’s counterbalanced on the Mirai with a superior fuel economy. With 67mpkg, it’s a clear winner over the Nexo’s 42mpkg.

How safe are hydrogen powered vehicles?

Given the high combustibility of hydrogen, one of the biggest concerns is the safety of hydrogen cars. Fortunately, this isn’t as big of an issue as you might think. Because it’s much lighter than air, hydrogen dissipates rapidly in the case of a leak.

On top of that, hydrogen fuel cell tanks are highly pressurised and durable. Toyota’s hydrogen fuel tanks have reportedly been tested with bullets, for example. That’s complemented by advanced leak detection systems which can shut down the car’s hydrogen lines when a leak is detected.

Is there a hybrid solution?

While there are no hydrogen hybrids currently available, the vehicles do use hybrid technology in the way they work. The electric motor on hydrogen cars is backed by an electric battery which is charged through regenerative braking. Rather than simply braking to slow or stop the car, the electric motor spins in the opposite direction to fight against the car’s forward motion. The kinetic energy generated from the motor’s resistance is converted into electricity, which is then stored in the battery.

Will hydrogen cars take off?

The progress of hydrogen cars as a viable alternative has two clear hurdles – namely, fuel production and infrastructure. With less than 20 fuel stations in the UK offering hydrogen fuel, drivers currently need to plan ahead when it comes to filling their car unless they’re lucky enough to have hydrogen fuel at their local fuel station.

On top of that, if hydrogen wants to rival electricity as an eco-friendly fuel, more research will be needed into production methods that are carbon free but also cost-effective. At present, however, hydrogen cars are still an emissions-free alternative on the road and offer superior driving range compared to their electric counterparts

What are the advantages of hydrogen?

There are a number of perceived benefits of hydrogen including:

What are the disadvantages of hydrogen cars?

There are a number of perceived disadvantages of hydrogen including: