The Mercedes-Benz Vito is a modern style of van that is available for van leasing from Leasing Options. You can add additional features to your Mercedes-Benz Vito business van lease such as, remote opening and closing windows, a solid bulkhead and a parktronic system. The Mercedes-Benz van comes fully equipped with a traction control and headlight range control.

The Mercedes Vito is a van that knows its business. This much improved version offers front wheel drive and a smaller 1.6-litre diesel engine for the first time, as well as greater efficiency in its more familiar 2.1-litre diesel rear-driven form. It’s also smarter, quieter, better equipped and safer. As a result, Stuttgart’s medium-sized panel van contender looks better equipped than ever to take the fight to an increasingly impressive array of Volkswagen Transporter and Vauxhall Vivaro-sized rivals.

So what kind of business do you have? If its deliveries are primarily relatively light and local ones, then you, for the first time, have cause to consider the Vito model – specifically the affordable front-driven 1.6-litre version. It comes in two guises, there’s a base ‘109 CDI’ model with 88bhp, but we’d highly recommend you find the extra for the uprated ‘111 CDI’ variant, which ups power to 114bhp. For longer distance work, heavier loads or towing, you should turn your attention to the Vito models that carry forward the previouis version’s mechanical layout, rear wheel drive mated to twin turbo 2.1-litre diesel power. There’s a choice of three models, the 136bhp ‘114 BlueTEC’ variant we’re trying here or a 163bhp ‘116 BlueTEC’ derivative, which slots in just under the top 190bhp ‘119 BlueTEC’ version. This top model gets a sophisticated 7-speed ‘7G-TRONIC PLUS’ auto gearbox that’s an option on the other 2.1-litre variants.

Basing any van on an up-market MPV is always going to help its aesthetics – and so it proves here. The Vito is essentially the commercial vehicle version of Mercedes’ V-Class luxury MPV, so as with that car, you get slippery aerodynamics and a purposeful look, with an arrow-shaped bonnet flowing down into a nose section that, with greater crash protection, accounts for the revised model’s extra 140mm of length.

Time to take a look inside. The Vito’s wide door opening and well placed step mean that getting in is a simple enough manoeuvre and once seated aloft, you’ll find a cab that’s immaculately constructed and typically functional.

That quality feel is exemplified by the smart three-spoke multi-function steering wheel, which isn’t set at such a bus-like angle as you’ll find in some competitors. Through it, you view clear, round, classy dials separated by an information display.

We also highly rate the seats. Trimmed in tough black ‘tunja’ fabric, they’re much more comfortable than before, partly because the base cushion is bigger and the backrest is larger. And partly because a change to the contour of the bulkhead means that they can be reclined by 83mm more than they could previously be.

All versions of the Mercedes come with a choice of either 2.8 or 3.05-tonne Gross Vehicle Weights, go for a standard 2.8-tonne front-driven variant and you’ll be able to haul up to 955kgs about. A rear-driven Vito though, can do much better. You get an additional 3.2-tonne Gross Vehicle Weight option with this configuration and the result is the potential to carry a maximum payload capacity that could be as much as 1,255kgs – a class-leading figure.

And loading capacity? Well, since Vito drivers don’t get a choice of roof height, this’ll depend entirely between drivers’ choice of body length. The shortest ‘Compact’ bodystyle gives you 5.8m3 of capacity and 2,586mm of loadbay length. Move on to the ‘Long’ variant and you get 6.3m3 and 2,831mm of length. Finally, the ‘Extra Long’ version gives you a spacious 6.6m3 and 3,061mm of loadbay length. Three dimensions are the same for all Vitos though. First, there’s a loading sill height over which you’ve to lump your cargo – that’s 557mm. Then, the loading bay height – 1,195mm. And finally, the loading bay width – 1,685mm from side to side or 1,270mm between the wheelarches – just wide enough to slide in a Europallet. In fact, the most spacious ‘Extra-long’ derivative would easily allow you to fit three Europallets in line in here. Talking of pallets, you can also fit one in through the sliding side doors – there’s one each side provided as standard.

Keeping costs down will be a major priority for potential owners, people who’ll be pleased to hear that Mercedes is claiming across-the-board fuel economy gains of around 20% for the improved Vito.

With the improved Vito model, Mercedes has at last showed itself to be really serious about the medium range van segment. You really can now consider an LCV bearing that famous Three-Pointed Star as a realistically-priced alternative to that Vauxhall Vivaro or Ford Transit Custom you might have been thinking about – and this is it.

Of course, there’s more Mercedes could do. The cabin’s very well built but it could be a little smarter and more user-friendly. And there’s clearly more work that could be done in terms of entry-level engine efficiency. Otherwise though, there’s no doubt that a big step forward has been made here. Medium range Transit-class customers will always have cheaper options of course. Nearly all though, are lacking this van’s one most crucial ingredient: Star Quality 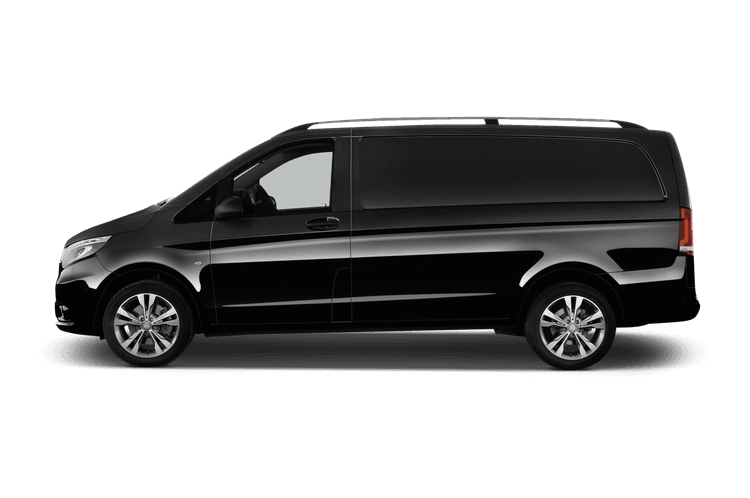