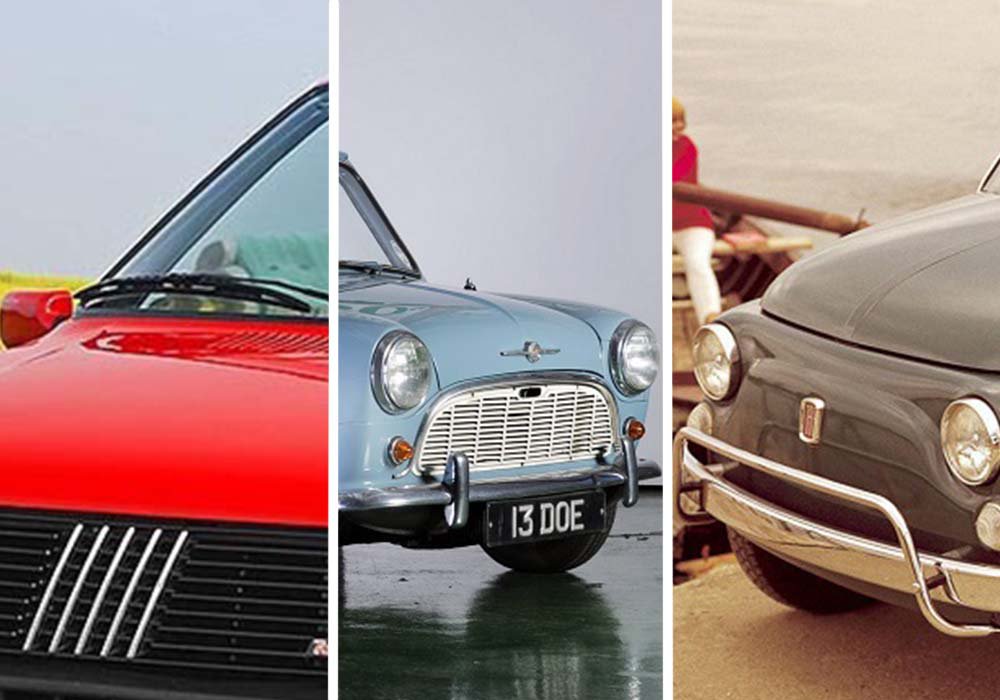 Ask a hundred car enthusiasts to list their most revered small cars and you’ll get a hundred different answers! At Leasing Options we love cars of all shapes and sizes, but there's always special place for those iconic little motors that have ferried families around for the last century or so. To celebrate those little pocket rockets we've delved deep and put together a little collection of our favourites, the top 10 iconic small cars.

110 years ago, Henry Ford changed motoring forever with the production of the Model T Ford. 15 million cars were produced in 20 years, making it the longest production run of any automobile model in history. The car was designed for everyday use by ordinary people and had 22-horsepower, a four-cylinder engine and could reach 40mph. The model eventually ceased production in the late 1920’s after Americans longed for a more stylish and luxurious car.

The Beetle concept was designed by Ferdinand Porsche in 1934 after Adolf Hitler wanted to solve Germany’s unemployment issue by building special roads and mass-producing a car that everyone could afford. Hitler’s requirements for the car included a top speed of 62mph, the space to transport two adults and three children, an engine that could achieve 32mpg and a price tag below £86. Five years later only a few vehicles had been built but at the start of World War II in 1939 manufacture ceased, mass-production didn’t start until the Allied occupation. The styling was inspired by the streamlined shapes of nature- specifically a Beetle, hence the name.

Known as the ‘Cinquecento’, the Fiat 500 was introduced in 1957. It was designed as a functional, cheap and economical town car for post-war Italy. At just 9 feet long, the Fiat was one of the first ‘city cars’, selling almost 4 million from launch. Low maintenance costs and a low retail price earned it ‘the people’s car’ name, soon making the Fiat 500 a motor that many other manufacturers wanted to copy and develop their own version from.

The first Austin Mini rolled off the production line in 1959 being developed as a result of the petrol shortage in the 1950’s. The Austin Mini was the best-selling British car for the next 40 years, and had a production run of about 5.5 million cars, changing the landscape of affordable family motoring. The iconic Mini without a doubt shot to fame for its starring role in the ‘Italian Job’, where it was driven by Michael Caine. Since then, the rise in popularity of the mini hasn’t shown any sign of stopping!

The first generation Renault 5 arrived just before the Fiesta allowing it the chance to gain a foothold in the UK market, and it also proved popular across Europe. There's more than a touch of retro-futurism about the vehicle's shape, with more sloping lines than you'd expect to see on a small car, particularly round the back. The quirky design continued inside where a dash-mounted gearstick featured, although this was dropped on later versions for a more conventionally placed knob.

The VW Golf Mark 1 was designed to replace its predecessor, the Beetle, and made its debut at the Frankfurt motor show in 1975. The car was labelled as the ‘fastest Volkswagen ever’ with a 1588cc engine, aerodynamic add-ons to increase downforce and a sporty interior. The Golf GTI and GT models were fitted with a 1.6-litre engine, amongst other performance enhancing components which resulted in the car reaching 0-60 in an impressive 9 seconds! The Golf’s success story didn’t end there either of course, the most recent seventh-generation model is one of the most popular cars in Europe.

The 1973 oil crisis shook up the global car market, prompting manufacturers to look at developing smaller, more economical cars. The Fiesta’s wide range of specifications to choose from made each model unique to its owner, which many argue was a major contributing factor to its success with 1 million units being sold in just 4 years. Seven years later and the second-generation Fiesta was born. The main changes were cosmetic, making the body rounder and sharpening up the interior.

The 205's disctinctive three stripe grille made it stand out from the crowd straight away, and even to this day the car is instantly recognisable. That sporty style language was never deviated from in the car's 15 year production run and the design influenced other Peugeot models for years to come - some say the 205 saved the brand from obscurity. A GTI model followed a year later in 1984 and is regarded by many as one of the best hot hatches ever made, last year one sold for over £38k at auction!

Another car from the class of '83, the Uno pipped the 205 the European Car of the Year and proved hugely succesful throughout its lifetime. After production ended you could pick one up for peanuts and it proved the perfect first car for people who learnt to drive around the time of the millenium, consequently I've rattled around in a fair few Unos in my time. It was also one of the last few cars to feature a manual choke, something almost certain to confound today's new motorists!

Clearly 1983 was a big year for little cars. The Opel Corsa was marketed in the UK as the Vauxhall Nova and sold extremely well throughout its lifespan, despite looking particularly dated when production came to an end in 1993. The replacement car adopted the European name and the Vauxhall Corsa moniker has, of course, stuck to this day. LIke it or loathe it, that boxy shape and oversized plastic bumper is about as eighties as it gets when it comes to small cars.