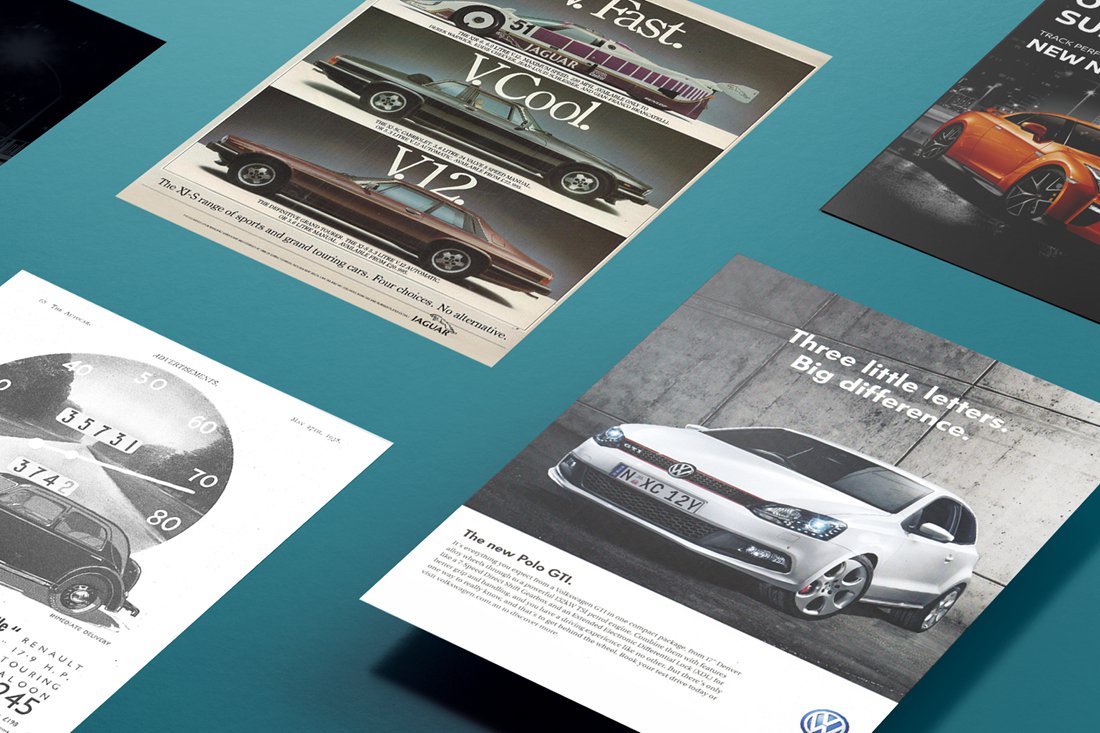 The Changing Face of Car Advertising

Whether it’s the retreat of diesel and dawn of electric, or the increasing resistance to cars in city centres, the automotive industry is one that never stands still.

As the models themselves have evolved and changed with time, so too have the ways in which they’re advertised. What was once an acceptable and expected way or marketing motors, is now outdated and in some cases even frowned upon.

To get an idea of just how much motoring has changed over the past few decades, we’re shining a then-and-now light on the industry and its ads. 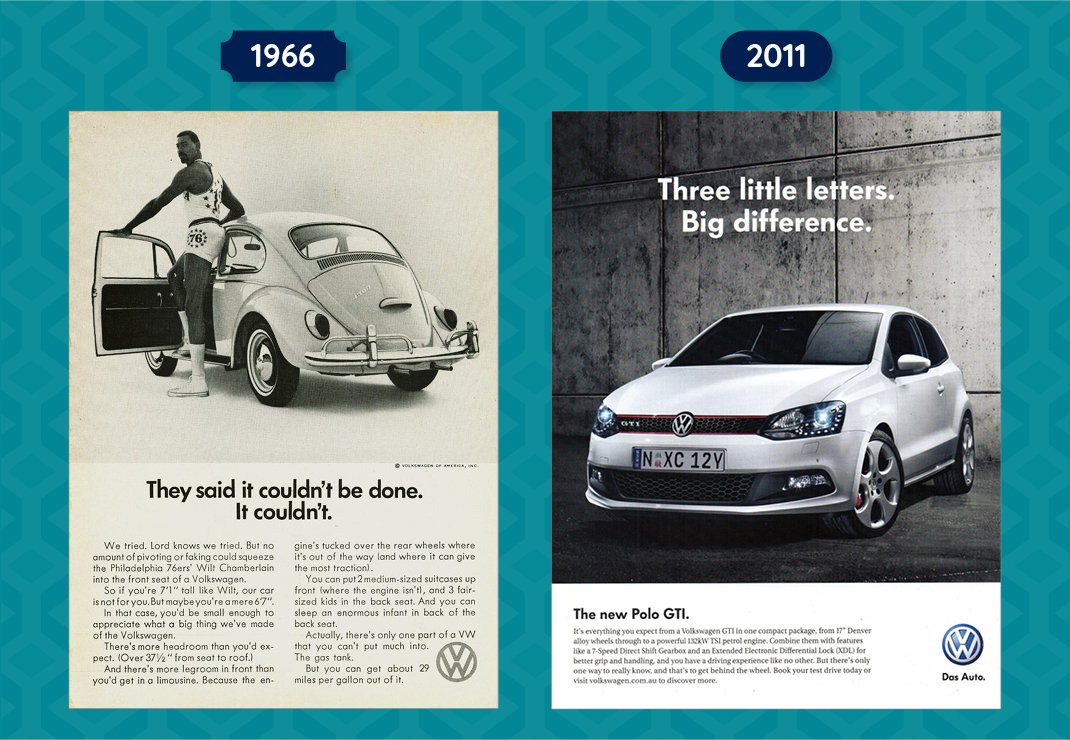 There’s a wealth of classic Volkswagen material to pick from, but the manufacturer’s evolution is perhaps best demonstrated by starting with this ad from 1966.

Featuring seven-foot-plus basketball legend Wilt Chamberlain, it pokes fun at the VW Beetle being inadequate for drivers of such height. But, that matter-of-fact approach, which challenged comments on its size head on, has since been flipped on its head.

Although it doesn’t depict the latest model, this relatively recent ad adopted a prouder stance that boasts the capability of the Polo GTI without acknowledging its downfalls. The “Three little letters. Big difference.” tag reflects a more confident approach, by hinting at its ability without giving specifics.

This next one is a bit of an interesting one, in that there are differences and similarities. On the face of it, they seem completely unrelated, with the original looking more like an article than an advert.

The heavy reliance on words is something that Audi and nearly every other carmaker has done away with. The German brand now uses only short and snappy tags, such as this RS 3 example, which reads “The all-new Audi RS 3 Sportback. Born restless.”

That’s similar to the original’s “Hates drinking. Loves driving.”, but the newer ad accompanies that with a focus on stylish, eye-catching imagery too.

The American carmaker’s identity is vastly different either side of the Atlantic; where they have the F-150 pickups, we have the Fiesta.

Here, we look at a couple of their British ads, on the XR2 — a souped-up Fiesta — and their commercial range. Originally, the brand’s focus was almost entirely on its cars and not the people who’d drive it, with an Audi-esque tagline.

Fast forward a few decades and the onus has shifted somewhat. In the case of this commercial promo, the workers supported by Ford’s business vehicles also take the limelight. This is reflected in the marketing of its cars too, with a focus on their relevance to modern life and the people who’d use them.

Looking at these two examples from Jaguar, it’s less a case of a change in Jaguar’s style of marketing and more one of the industry as a whole.

From their ’86 ad promoting the XJS’ whopping V12, now the motoring equivalent of  a dinosaur, the majority of manufacturers are instead highlighting their eco-friendly efforts.

Whether it’s their own conscience, or the increasing pressures of anti-emissions initiatives, the momentum has definitely swung in favour of electric alternatives like Jaguar’s I-PACE. Still, we’re a fan of the side-on imagery sticking around.

With over 80 years between these two, these two show the biggest evolution in both Renault and advertising as a whole, starting with the black and white of print and ending in HD colour.

In terms of the focus, the original ad is very much a reflection of its time. The automotive industry was just getting up to speed in the 30s (pun intended), and you can assume the focus on performance was a shot at getting ahead of Renault’s rivals.

Jump to 2019 and the French brand’s instead trying to appeal on its looks. They could go far worse than the Renault Megane too. The TV ad, which is part of a series with Sky Sports, features arty shots of the car and “getting you to the game in style”.

The dos and don’ts of car advertising 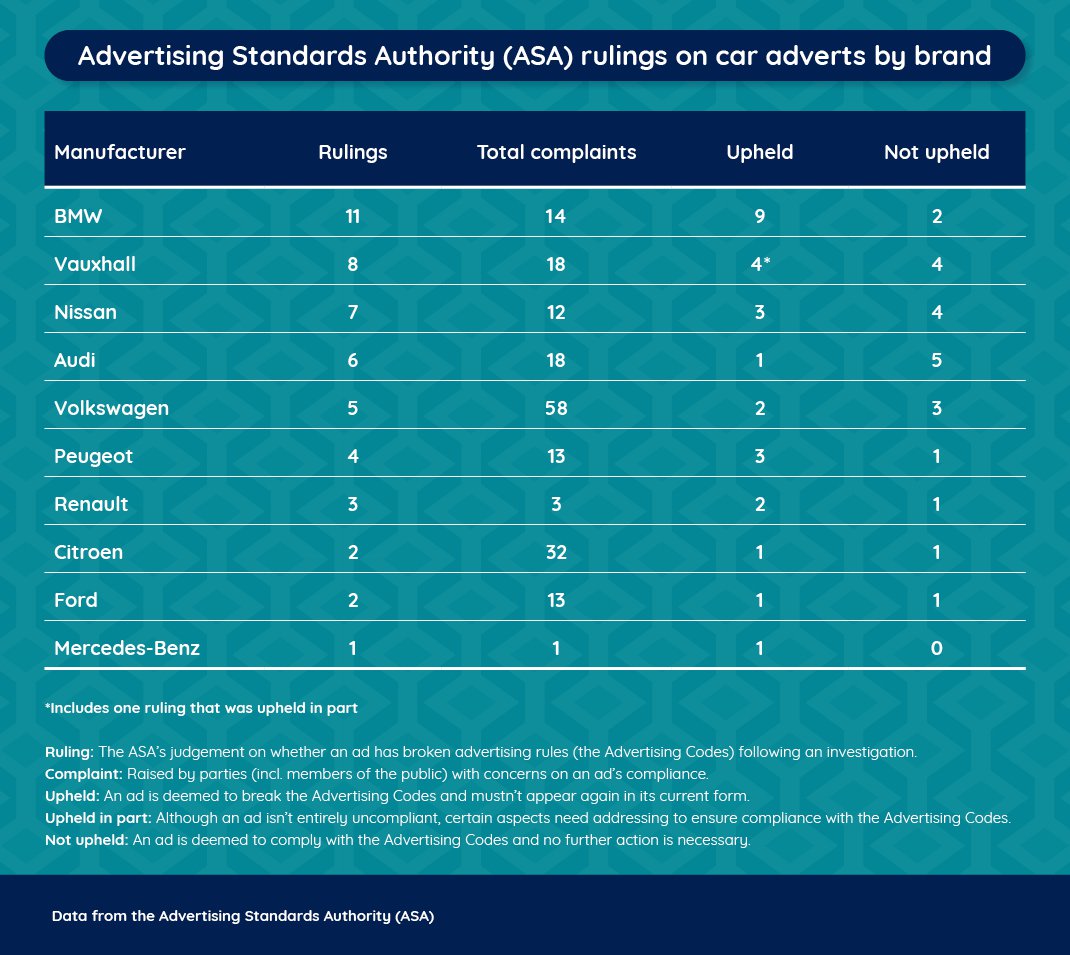 But, it isn’t just a marketeer’s judgement that’s responsible for what makes the newspaper footers and TV breaks; in the UK, the Advertising Standards Authority (ASA) regulates the adverts we see, and not just on cars.

Some of the car manufacturers we’ve looked at here have found themselves on the receiving end of an ASA investigation, with varying outcomes.

As the table shows, a high number of complaints doesn’t necessarily mean a carmaker’s in the wrong; Volkswagen leads the line on complaints (58), but only two of its ads were found to break the guidelines. BMW, however, faced 11 rulings (nine upheld) from only 14 complaints.

In 2016, Ford had a Ford Focus RS webpage looked at for its apparent focus on speed and irresponsible driving – the regulator’s guidelines say these aspects can’t be the main message of an automotive ad. Ultimately, the complaint wasn’t upheld, with a ruling that the wording was necessary to distinguish the RS from the standard and ST models.

A 2017 Renault Twitter post, which can also class as an advert, wasn’t so lucky. The tweet from Alpine Cars UK, a Renault subsidiary, featured footage of an A110 accelerating, braking and cornering quickly. Despite an experienced racer driving it on a closed road, the guidelines on speed and irresponsible driving were still applicable and the ad was judged to have emphasised those aspects. The complaint was upheld.

No sooner than the latest models are released, they’re replaced by the next batch of rivals and renewed editions. The ways in which they’re marketed are part of that same cycle.

The coronavirus pandemic, and in particular the easing of global lockdowns, will also have an impact on that, as manufacturers do their best to make up for the slump in sales. Here’s one to keep an eye on!

For more industry insight and news, including advice features and quizzes, make sure to bookmark the Leasing Options blog.