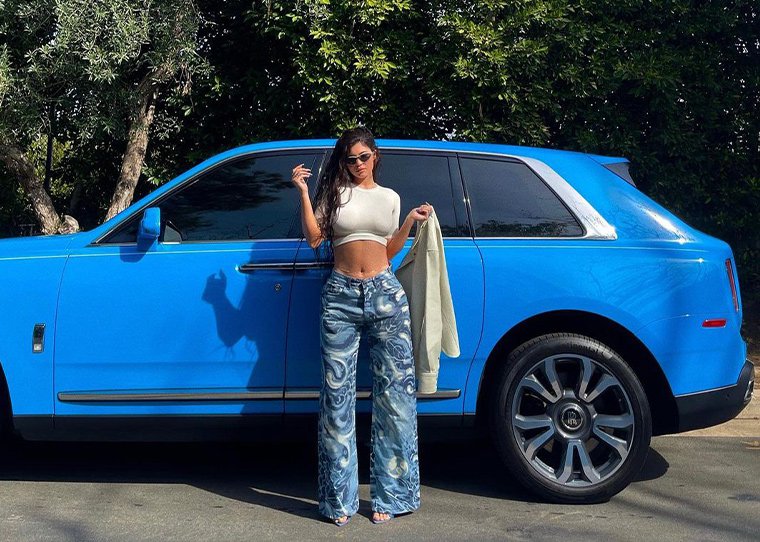 If you’re not sure who Kylie Jenner is, she’s the youngest member of the Kardashian-Jenner clan. Her makeup business – Kylie Cosmetics – has made her a pretty $1 billion and given her the title of arguably the youngest ‘self-made’ billionaire in history.

So it’s no surprise that as well as having a costly collection of rare Hermès handbags, Jenner also has an impressive collection of luxury cars, reportedly worth millions.

Ranging from a brand new $3 million white Bugatti Chiron to an orange Lamborghini Aventador, the young makeup mogul has a car for just about every occasion.

Kylie showed the world this luxury vehicle after she split from Travis Scott in late 2019.

The car is worth more than a few of her other cars combined at a cool $3 million, and Kylie came under fire for flaunting her wealth after posting a video of the car on Instagram.

She later deleted the video but we guess that buying a multi-million-dollar car is one way to go about a break-up spending spree.

Jenner is incredibly fashion conscious and this doesn’t stop at her outfits. She has quite the penchant for wrapping and painting her cars when she's in the mood for a change.

In 2018, she had this Mercedes painted bright orange… so it would match the Lamborghini Aventador she has ‘just for the summer’. Well why not?

If a bright orange Mercedes wasn’t enough car customising for Jenner, she showed off a custom-made ice blue Rolls Royce in December 2018, which she called her ‘dream car’. Does that mean the rest of her fleet is a nightmare?

And that’s not the only Rolls in Jenner’s garage – she’s also shown off a similar car in taupe, blue and black. As she’s known for repainting her cars, we’re assuming they’re all the same vehicle, but when a couple of million dollars is spare change, maybe not!

She’s quite a fan of the more traditional Roller as well, receiving a white, vintage Rolls Royce for her 21st birthday. Now that’s a present we’d quite like to unwrap and take for a spin…

Oh and speaking of presents, Jenner received her rare LaFerrari as a ‘push present’ – given to a new mum after giving birth – from her then-boyfriend.

Starting at a cool $1.4million, there are only 210 La Ferraris in the entire world according to ELLE Australia. And one just happens to be parked up on Kylie Jenner’s driveway.

Apparently, Jenner still owns the first car she ever bought – a Range Rover Autobiography. Currently retailing around the $150,000 mark, this is a pretty opulent starter car.

Considering a lot of us started out in a second (sometimes third) hand car, you’d be forgiven for being slightly envious of this young mother of one!

All this window shopping has got us thinking – what would make up your dream fleet of luxury cars if money were no object? And what colours would you have on standby if you just fancied a bodywork change?