First Look at The Polestar O2

Looking for an electric car with a twist on conventional design? Then take a look at Polestar’s new concept offering – Polestar O2.

The recent unveiling in LA revealed an all-new concept design, which Polestar says is not an SUV or a GT – it’s a sports roadster.

You may recognise some of its signature styling details because it looks similar to the Polestar Precept. However, the manufacturer says it has taken the design language further to create a premium performance all-electric roadster.

So, what does the Polestar O2 offer consumers?

This new model is hoping to reclassify the traditional sports car. The beauty of the O2 is that it provides a fantastic blend of style, technology and sustainability, all while giving the driver impressive performance.

The Polestar O2 has been designed to turn heads. The car maker says its aesthetics and aerodynamics are influenced by aerospace design. Plus, it stays away from typical sports car features such as spoilers and protruding wings. Instead, the car has aero ducts integrated into the wheel arches. The rear lights act as air blades. It also features a hardtop convertible roof.

The car’s body is made from varying grades of anodised aluminium, which makes it super lightweight. The O2 is a little shorter than the Precept but is approximately the same height and width.

Did you know that there’s a massive problem with car metal recycling? Conventionally, recyclers receive the remains of a car in the form of a crushed cube. That metal is shredded and separated, but there’s no way of distinguishing between different grades of aluminium.

As a result, the material is downcycled, resulting in the lowest grade of reusable metal. To avoid this, the O2’s unibody design uses labelled grades of aluminium so it can be recycled for the next application. Simply put, this means each grade of aluminium can be separated and retain its properties use after use.

The interior space brings together sustainability, innovation and comfort to showcase a stylish and enhanced driving experience. This model has an infotainment system that adapts to the movements of the driver. There’s also 3D knit upholstery and carefully curated colour combinations.

Innovative mono-material is used for comfort and easier recycling, similar to the aluminium components above. In simple terms, this means using a single material base for complex interior components. Namely, highly recyclable thermoplastic. From the foam and adhesive to knit upholstery, everything can be recycled without the need to separate it or diminish its properties. 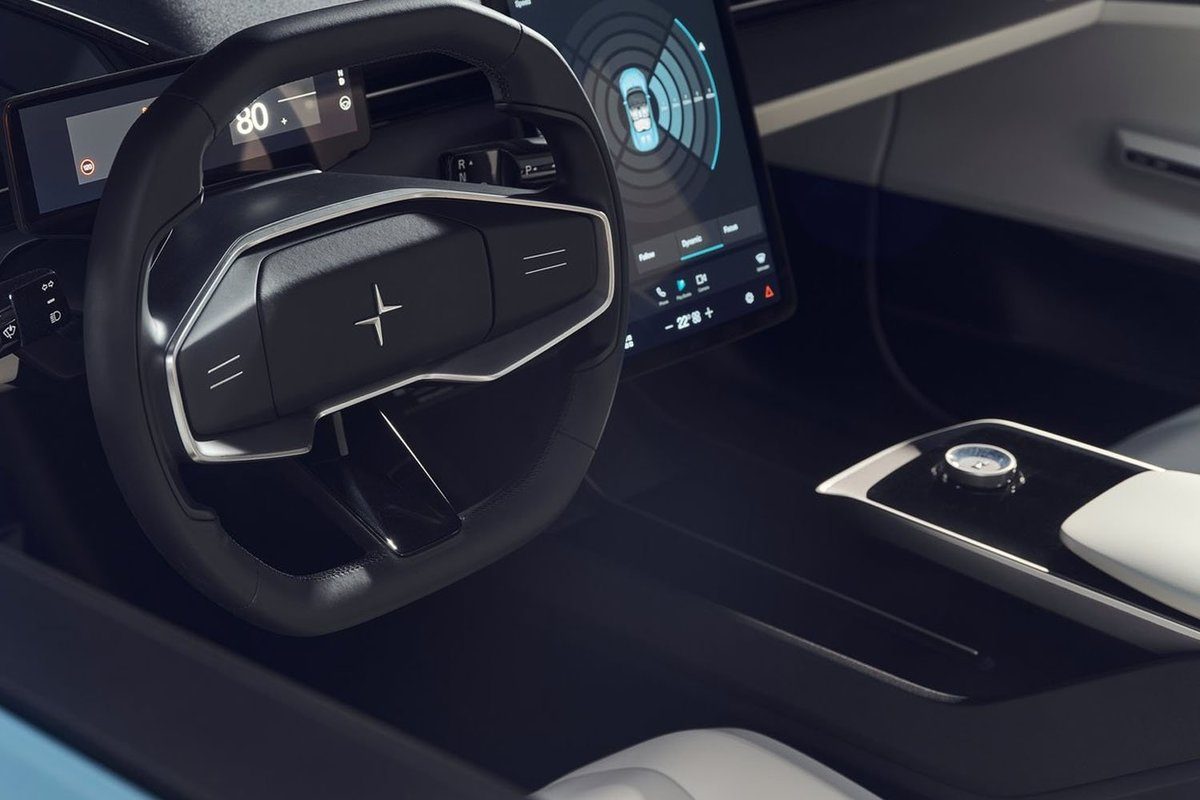 Produced by a dedicated electric car brand, it goes without saying that the Polestar O2 will be completely battery powered. However, this is one area where the manufacturers haven’t felt the need to innovate. The car maker says The Polestar O2 will share the same battery and powertrain as the Precept (soon to be Polestar 5).

And why not? The Polestar 5 is expected to have a 103-kWh battery that provides over 300 miles of range. That’s paired with noiseless operation, allowing you to drive through the countryside without even disturbing the cows!

Capture your drive with drone footage

Another innovative aspect of the Polestar O2 concept is the inclusion of a cinematic drone. This is housed in the rear and takes off and lands while you’re driving. Yes, really.

The camera captures your driving footage, and you can select from three different modes to film an atmospheric or action-packed edit. Swap sharp dives for swooping arcs to create a smooth video or opt for a close-up shot while driving with the roof down.

The video can be viewed on the centre display console, where you can also edit it too. So, you can enjoy all the fun of driving this model and document the experience in some style – disclaimer below.

Will the Polestar O2 move into production?

While there is nothing confirmed as yet, there is a possibility it may go into production in the future. Its predecessor, the Precept, was also a concept car that is now moving into production under the title Polestar 5, which is expected to launch in 2024.

In fact, the Polestar 4 is still yet to be launched – currently expected at the end of 2023 – and production has only just started on the Polestar 3. We’ll keep it brief – it could be some time before the Polestar O2 (or Polestar 6?) gets its tyres on our roads.

If it does go into production, there is something you might miss. The drone! While this is a great little extra to bolster its tech credentials, it’s not particularly practical for road use. So, we think this might not quite make the cut if it gets to the production line. That could be a bit of a let-down when you get back from a particularly picturesque drive along the coast.

How much will the Polestar O2 cost?

We’ve seen just how impressive the Polestar O2 sounds. Now over to the numbers. The Polestar 3 and 4 follow suit from the existing Polestar 2, with a price tag of around £40,000 to £50,000 at release.

However, the subsequent models from the manufacturers are expected to be a little less modest. Polestar 5 is expected to cost upwards of £100,000, reflecting the ultra-premium price point of the initial Polestar 1 at release.

While no figures have been suggested for the Polestar O2, the high-tech approach and sporty design definitely leans more towards the Polestar 5 and 1 than the 2, 3 and 4 models. Paired with its high-tech features and the possibility of an on-board drone, we could be looking at Polestar’s most expensive car to date (with relatively good reason too).