With the upcoming brand-new F1 race being held in Miami, here at Leasing Options, we thought we’d put together a helpful guide to give those going to the race some great sightseeing spots that they can enjoy when away from the circuit.

Also, for gamers, this city is famous for featuring in the popular Grand Theft Auto: Vice City game, so for those out there who were fans of the classic game, we’ve also highlighted all the areas in Miami that appear, or have been used as inspiration, in the game if you want to discover some awesome locations/landmarks from Vice City.

Before we move on to the tourist guide, with Grand Theft Auto: Vice City having such an iconic look and design, we decided to have a bit of fun and reimagine the old school Vice City cover. We’ve replaced the elements with drivers, cars and mechanics from Formula One to see how it would look if we replaced the old characters from the original game with those that’ll be there at the inaugural Miami Grand Prix.

Check it out above! 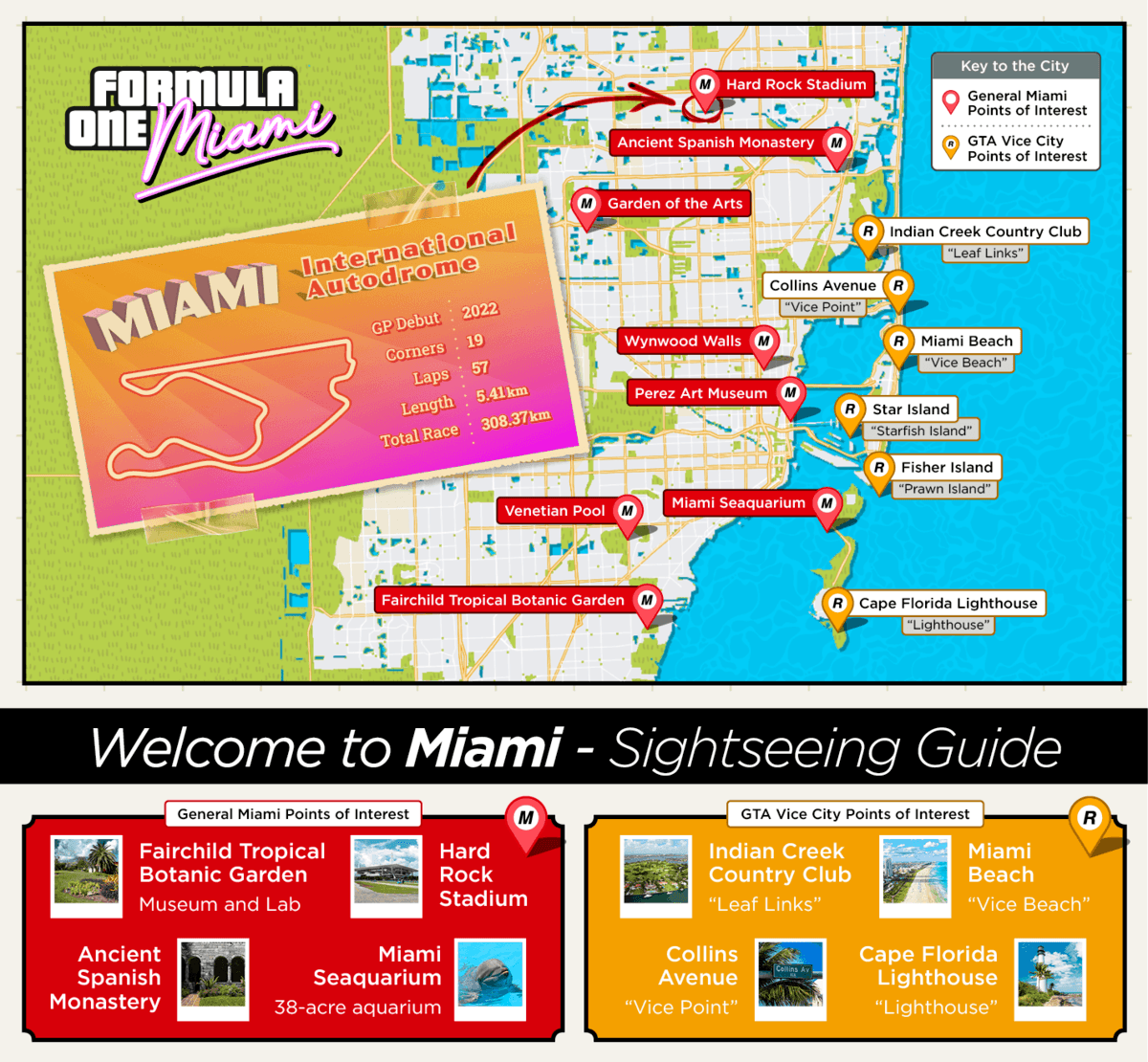 As you can see from the map, we’ve pinpointed two sets of locations, one of famous Miami landmarks and points of interest, and a second highlighting locations where Vice City took their inspiration for the game.

Hard Rock Stadium is a multi-purpose stadium located in Miami Gardens and is the home stadium of the NFL team the Miami Dolphins. The stadium itself has hosted six Super Bowls, the 2010 Pro Bowl, two World Series, four BCS National Championship Games, one CFP National Championship, the second round of the 2009 World Baseball Classic, and WrestleMania XXVIII, so it is certainly a hub for major sporting events.

Surrounding the stadium is the Miami International Autodrome. This is the purpose-built temporary circuit that’ll host the 2022 Miami Formula One race. The track is 3.36 miles long and features 19 corners with an anticipated average speed of around 139 mph.

If you’re planning to attend the event and want to know where the best place to watch the race is from, according to the F1 website, “a seat near Turns 1, 11 or 17 should put you in the thick of the action.”

The Spanish Monastery in North Miami Beach was originally constructed in the early 12th century, this purpose-built monastery was bought by an American newspaper magnate called William Randolph Hearst, who disassembled the monastery and then relocated it to its current site in Florida, which is why it’s often referred to as the most complex and expensive jigsaw puzzle in the world.

Garden Of The Arts

One of Miami’s hidden gems is the Garden of the Arts, located on West 76th Street, tucked away in the middle of warehouses and residences just off the Palmetto Expressway. Here you can see Latin American murals, sculptures and more including an amphitheatre and stage that offer a variety of live entertainment options.

If cash is tight, there is a great local sightseeing spot that is completely free to see and well worth a visit. The Wynwood Walls, located on NW 2nd Avenue, is one of the area’s most unique and appreciated art attractions in Miami, boasting around 40 murals produced by local, regional, and even international artists.

Housing artwork from the 20th and 21st centuries, the Perez Art Museum, known locally as the PAMM, occupies a section of prime real estate on Miami's waterfront and has been celebrating art from local and international artists for over 25 years. The interior of the building is almost a work of art in itself.

A great place for the family for an afternoon for something a little different is the Miami Seaquarium. Head to the Rickenbacker Causeway on the way to Key Biscayne and you’ll discover killer whales, dolphins, stingrays, seals, and penguins to name only a few.

Comprising more than 800,000 gallons of water that flows from artesian wells, the Venetian Pool in Coral Gables has been drawing crowds to its Mediterranean inspired facility since the mid-’20s. Though once primarily the domain of movie stars and other fabulously wealthy individuals, the pools are now a little less exclusive where you can also find a cool café with lots of tasty choices and everything else you’ll need.

Sometimes the heat can get a bit much in Miami, so why not cool off in the shade provided by the Fairchild Tropical Botanical Gardens, where you can enjoy the lush tropical vegetation that grows here with abandon. It’s one of the best places to see the wonderful show that Mother Nature puts on.

The Indian Creek Country Club and course inspire Vice City’s “Leaf Links” golf course and club. In the game, Leaf Links is made up of three islands located just west of Vice Point but in reality, sits to the north of Miami Beach.

Geographically based on North Beach in Miami, Vice Point takes inspiration from Miami Beach’s Collins Avenue. It consists of homes, apartments, and hotels aligned along the shore. The North Point Mall is also a parody of Miami's Aventura Mall.

The Miami Beach area of Miami serves as the main influence and inspiration for the Grand Theft Auto: Vice City’s Vice City Beach location, which is the large eastern island in the game. This area is where most of the game’s millionaires and models hang out and residents can be seen skating along the boardwalk, which replicates Miami Beach’s Art Deco design. Key areas in the game can be found here including Tommy Vercetti's first safehouse, the Ocean View Hotel, Lance Vance's house can be seen south of the hotel and Ken Rosenberg's office is located to the north.

Starfish Island in Vice City is where the wealthy reside. The island consists of 12 large mansions and also hosts the Vercetti estate. The island is based on Miami’s Star Island, a man-made island in Biscayne Bay completed in 1922 and was initially owned by developer Carl Fisher, who purchased several land parcels of what would become the city of Miami Beach.

Fisher Island is the most likely island to be the inspiration for Vice City’s “Prawn Island”. In the game, this is where the film studio is located.

In GTA Vice City, the Ocean Beach lighthouse is inspired by the Cape Florida Lighthouse that can be found in Cape Florida at the south end of Key Biscayne in Miami-Dade County. It’s the oldest structure in the area and is a time capsule containing an immense amount of Florida history. First erected in 1825, the lighthouse has survived nearly 200 years of erosion, hurricanes, an attack by native Seminole Native Americans and an explosion of lantern oil and gun powder.