The dark nights are drawing in, meaning driving conditions are only going to get tougher and tougher. Why are we bringing this up? Well, over the next few months, here at Leasing Options, are going to be putting together our very own Road Awareness campaign to bring light to the dangers of the darker winter months, and we start with what we are writing about today, which is drink driving, where data shows that it’s not only the darkness road users need to be aware of in the final quarter of the year.

Last month the government released the latest update on their Reported Drinking And Driving statistical data set, which goes back as far as 1979. That’s 40 years of data! When we went through it we found a lot of alarming stats that we felt needed to be brought to the attention of our customers and the wider general public, so read on to find out the latest on the drink driving situation as it stands today. 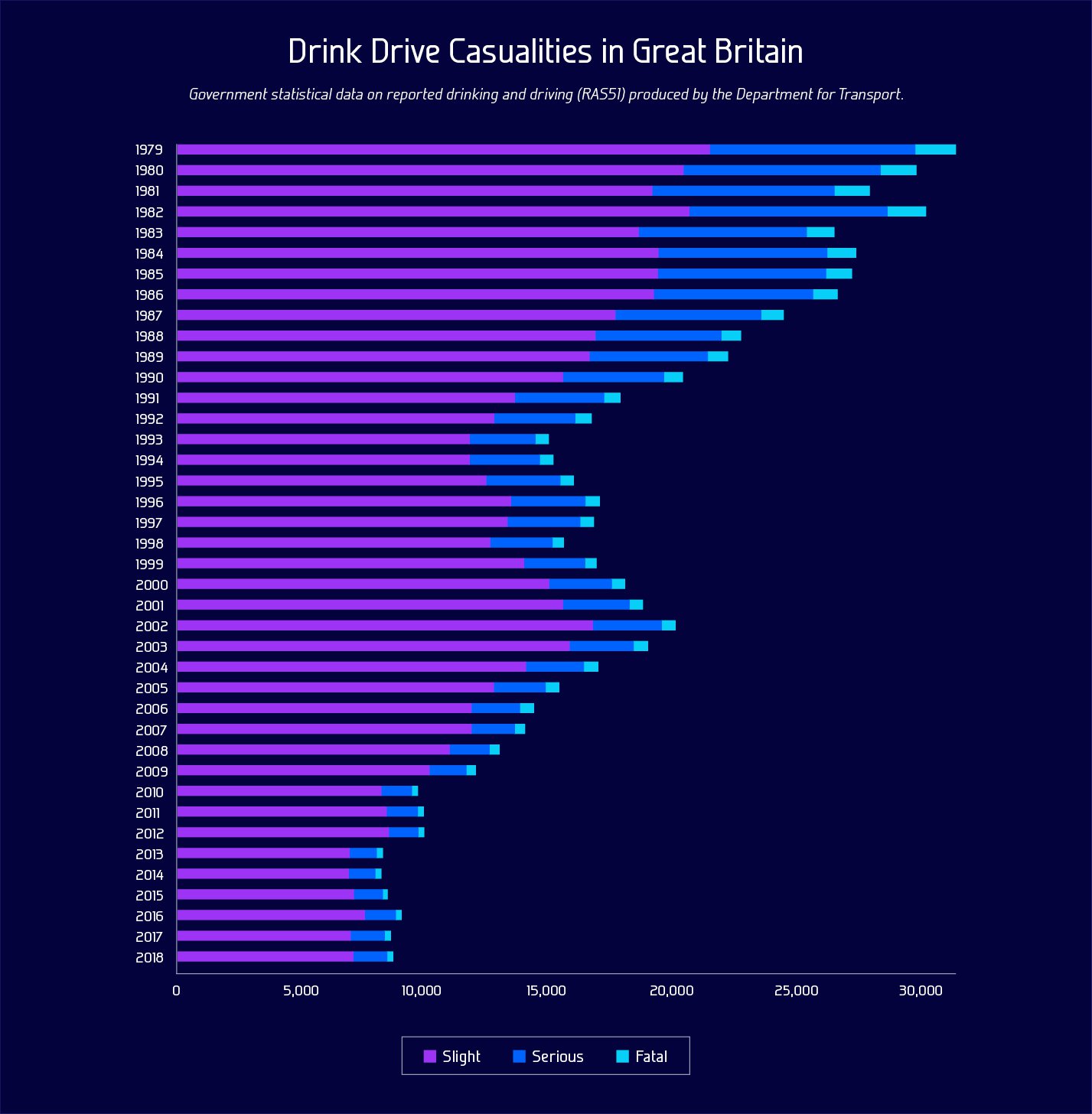 Let’s start with the good news shall we? If you refer to the graphic shown here, you’ll see that over the past 40 years the number of drink-driving related accidents has fallen dramatically from 19,470 to 5,890, a decline of 70%. This drop has also reduced total casualties by 72% and the number of fatalities by 85%, all great news. However, that’s where the good news ends.

When you break down the numbers you discover that over the last 40 years 1 in 18 drink driving crashes have caused a death and 1 in 3 have caused serious injury. Also, over the last five years, the total casualties from drink-driving related accidents has gone up 5.7%, with the number of people injured up 6.0% and fatalities have stayed the same. 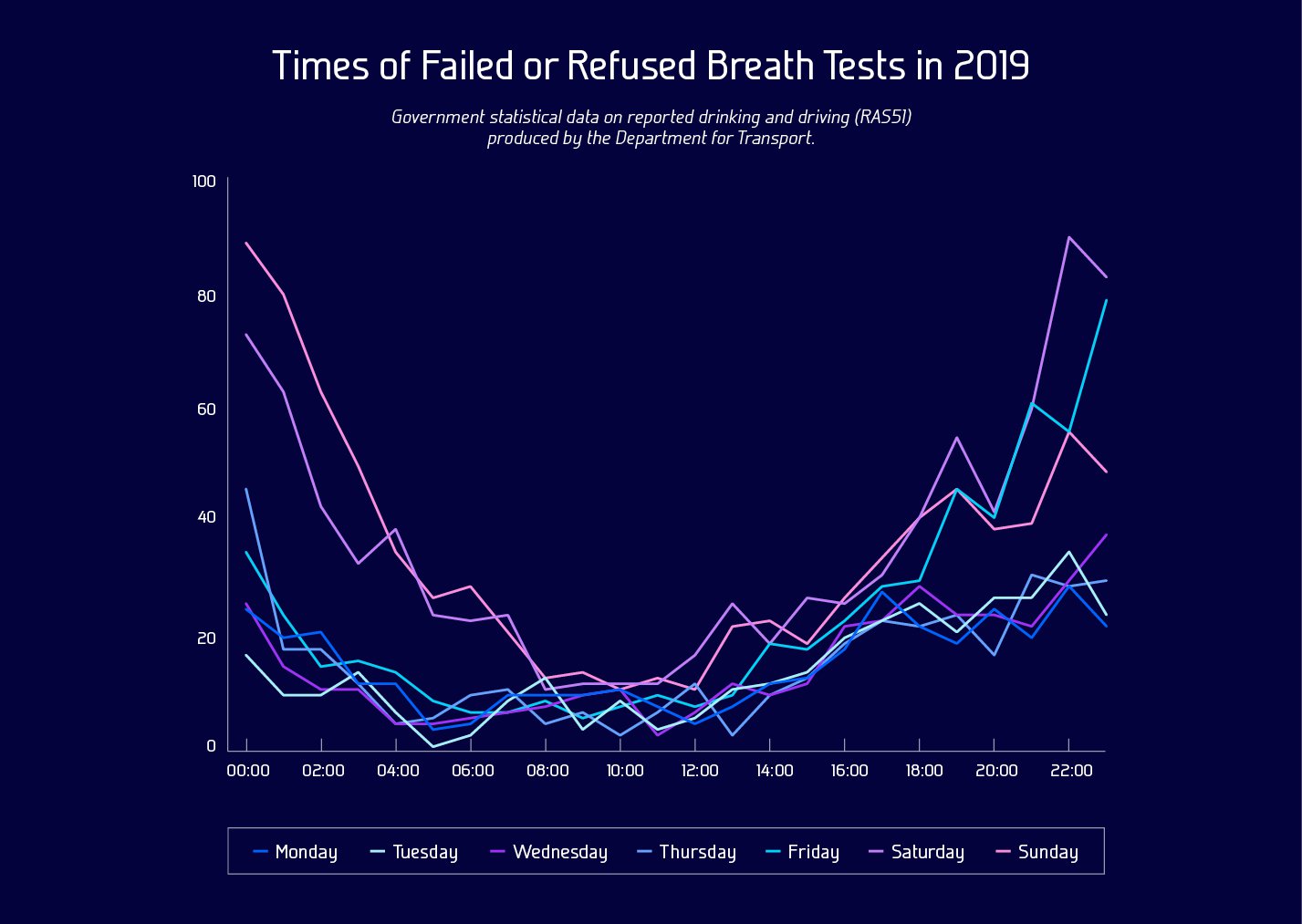 Perhaps unsurprisingly, in England and Wales, men, for the past 10 years, have been far worse than women when it comes to drink driving, a trend that continued last year with men failing 77% of all breath screening tests. But there is some good news for the guys. The number of men that failed a breath test has dropped from 10,556 in 2009 to 3,782 in 2019, a decrease of 64% in the last 10 years. Taking 19.2% of all failed breath tests in 2019 is the 25-29 age group. In fact, teenagers and people in their 20s contribute to just shy of 40% of all failed tests last year. An article published in the Metro not too long showed some hard-hitting anti-drink driving adverts that have been on TV over the years, but there’s hardly been any in the last few years. Does this mean the ‘don’t drive and drive message’ hasn’t been strong enough in recent years?

Another surprising highlight of the data showed the safest age group of drivers. It turns out that if you look at age groups in blocks of 10, i.e. 20s, 30s, 40s etc, people aged 70 and over are the safest when it comes to drink driving, only contributing a miniscule 1.4% of reported failed breath tests.

East Midlands Is The Worst Place For Drink Drivers 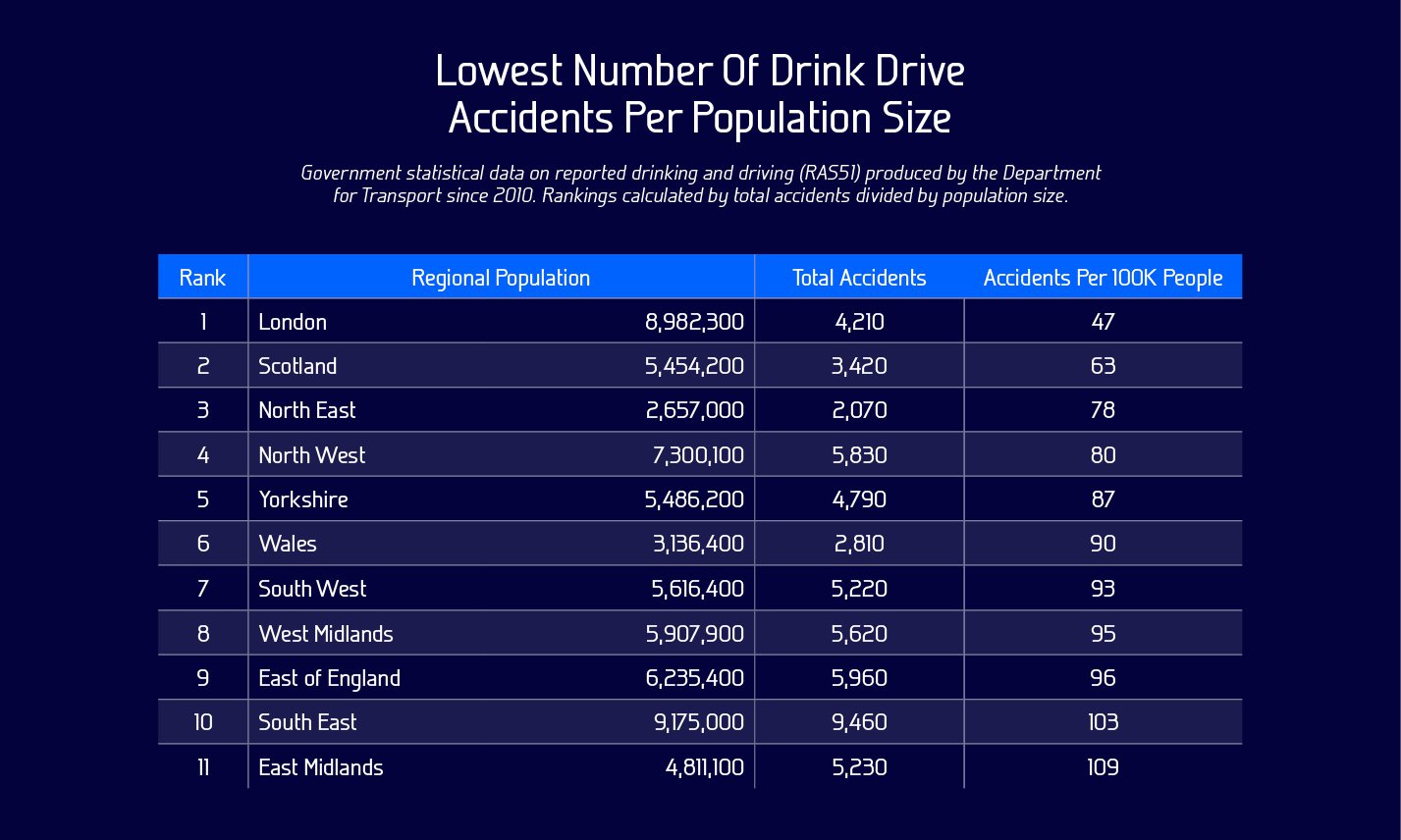 So, we’ve seen who's the worst out of men and women and the worst age groups when it comes to drink driving, but where abouts in Great Britain do we find the most people who drink and drive?

Despite London’s immense population, it’s actually the best when it comes to drink driving, thanks to the capital’s public transport systems, with a reported 4,210 drink-driving related accidents since 2010. That seems like a high number, especially when you compare it to the North East that recorded around half that figure at 2,070, but it’s when you compare it to the worst on our list, the East Midlands, where the figures really stand out.

Looking back at all this data, it’s clear to see that while we’ve done a great job over the last 40 years raising awareness of drink driving, resulting in a dramatic reduction in the number of drink-driving related accidents and casualties, as well as failed breath tests, it’s also clear to see that things are on the rise again.

We need to act now if we want to continue to reduce these numbers over the next few years and beyond.