TikTok has rapidly become one of the most used social media platforms in the world and is continuing to gain more and more users every month. The quick-video sharing based app developed by Chinese company ByteDance is now ranked by HootSuite as the 7th most used social media platform on the planet, with only Facebook, YouTube, WhatsApp, Fb Messenger, Instagram and WeChat boasting more users in 2021.

With its huge surge in popularity, here at Leasing Options, we thought it would be a good time to see which auto-based profiles and hashtags are doing the best on the app and see which manufacturers are getting the most views, which supercars are people showing off the most and which car-influencers are currently in pole position.

So read on and discover TikTok’s Most Viewed Auto Profiles And Hashtags as Leasing Options present the TikTok Fast Lane! 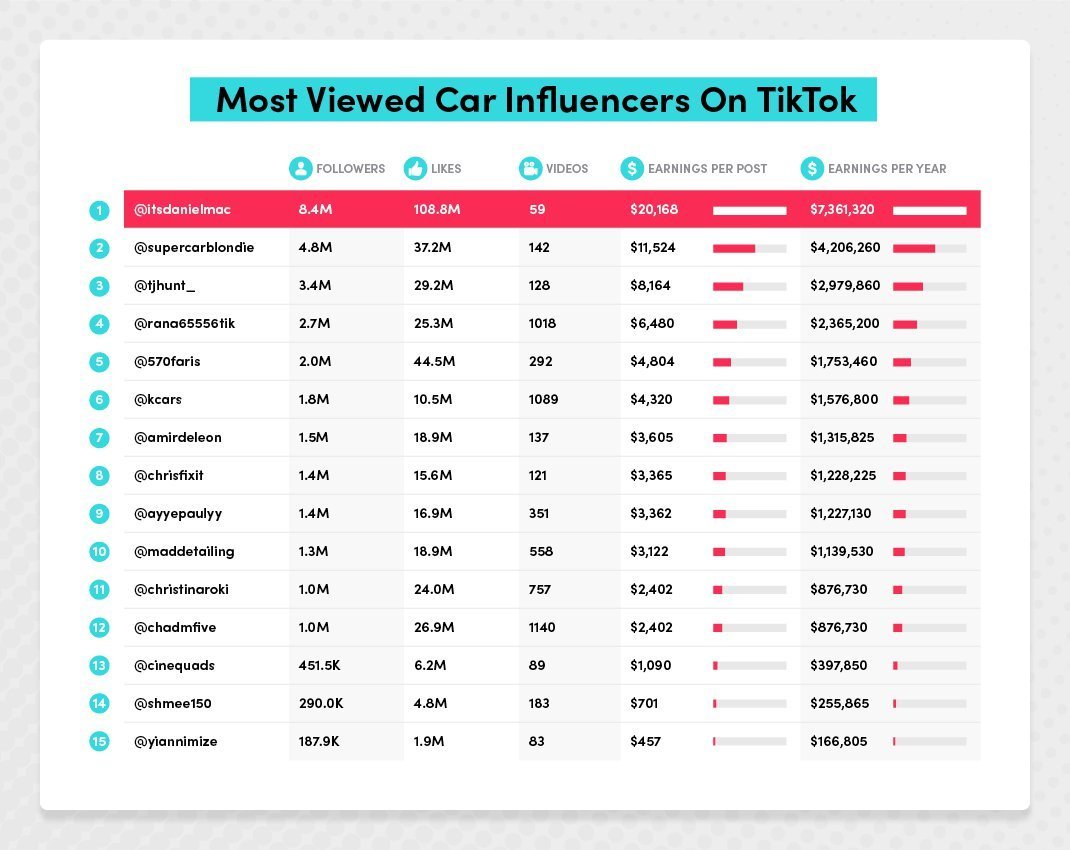 Most Viewed Car Influencers On TikTok

When you think of “influencers” you tend to think of Instagram or YouTube, but now, TikTok is the latest social media platform that finds itself with the latest breed. These influencers, who can drive an incredible amount of views to their profiles and videos, are earning a pretty penny for the posts they share.

Using an online calculator tool designed by the Influencer Marketing Hub, we can estimate what the top auto-influencers are earning from posting about cars.

As you can see from the table, those influencers that are in the top 10, all have earnings over $1 million per year. However, what’s really interesting is when you look at the vast differences of the profiles.

In pole position we find @itsdanielmac. Daniel has gained a massive fan base on TikTok by sharing videos of him approaching drivers of supercars and asking them what they do for a living. His videos are regularly watched over 10 million times per post and have amassed a whopping 109 million views total, which is even more amazing when you see that he’s only posted 59 videos on his profile, compared to some of the others on the list who have posted over 1,000 times.

Due to the huge success of his videos, we’ve estimated that Daniel will be able to bring in around $20,168 / £14,529 per post, which would calculate to around $7.36 / £5.30 million per year if he were to post the same amount of videos each year. That’s quite staggering!

The TikTok Money Calculator is for influencers to calculate estimated earnings from brand collaboration posts according to engagement and number of followers. The tool is not an official TikTok tool and not in any way associated with or endorsed by TikTok. Ultimately, both the brand and influencer negotiate what they consider to be fair value for endorsing the product or service. This is only an estimation and can vary greatly by niche, country, audience location and audience brand affinity. 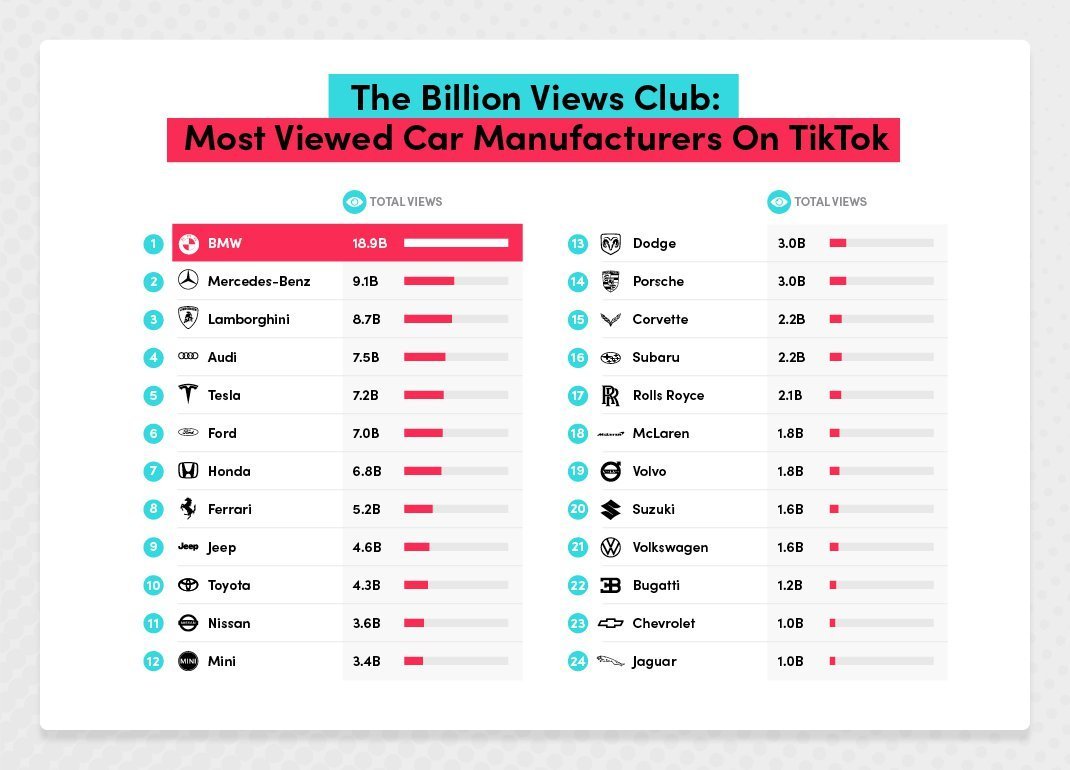 Most Viewed Car Manufacturers On TikTok

Next, we wanted to see which of the main car manufacturers are tagged the most in TikTok user videos. When inputting each manufacturer individually, using a hashtag before each name, there were some surprising findings.

The first and most obvious staggering statistic we found was that BMW is streaks ahead of any other manufacturer when it comes to TikTok views, with a total of 18.9 billion. They are so far ahead of the rest of the pack that they have over double the number of views that Mercedes-Benz has (9.1 billion) and over two-and-a-half the number that Audi has (7.5 billion).

A few other shocking findings were that, despite Tesla’s popularity, they’ve managed to gain a top 5 status with a total of 7.2 billion views, which is more than Ferrari and McLaren. Jeep ranked in the top ten but their fiercest rivals, Land Rover, miss out on the top 25.
Manufacturers such as Ford, Honda, Toyota and Nissan all manage to outrank manufacturers like Porsche, Rolls Royce and even Bugatti. 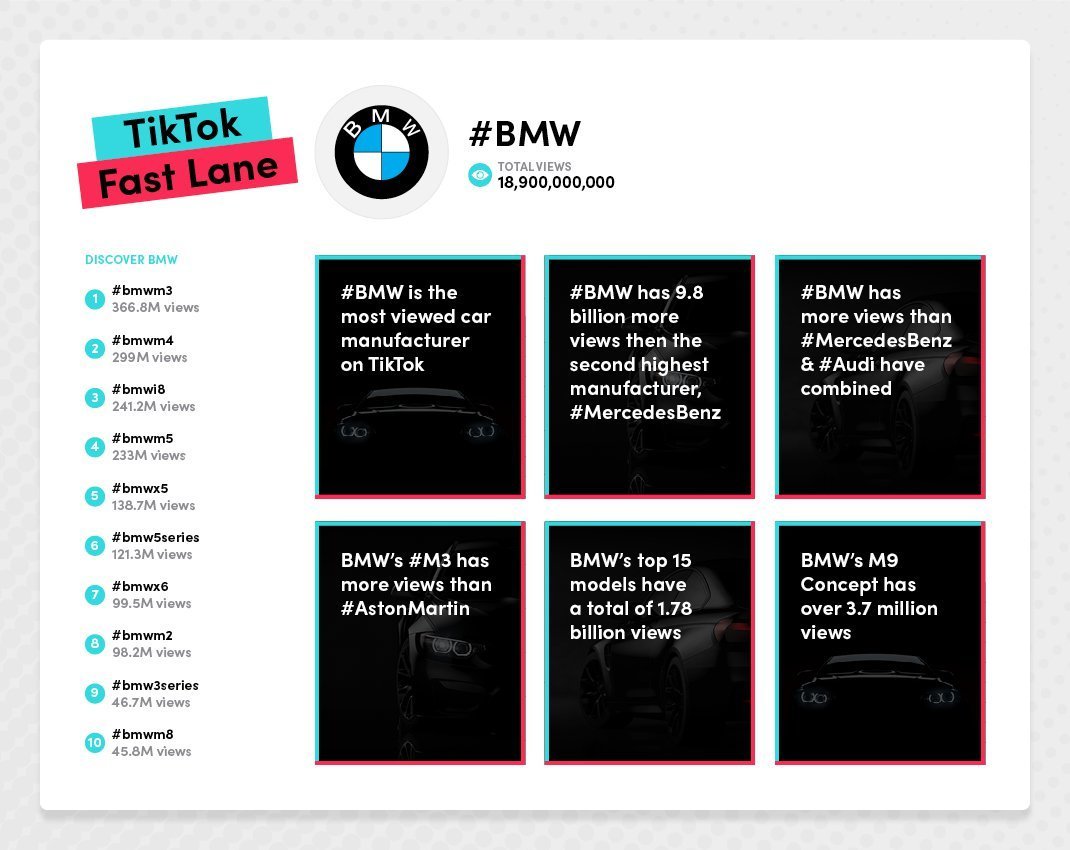 The dominance of BMW on the platform was so impressive that we decided to look at the manufacturer in more detail and look at their individual models to see how they match up with others.

BMW’s biggest performer on the platform is its M3 model. The performance version of the 3 Series has, so far, recorded over 360 million views on TikTok, which is more than supercar manufacturer #AstonMartin has been able to gain, only managing 341 million.

It’s not only BMW’s M3 that gets millions of views on TikTok. In fact, the German manufacturer’s 10 highest viewed models have a combined total of over 1.68 billion views, which is 543 million more than Audi’s top 10 models. 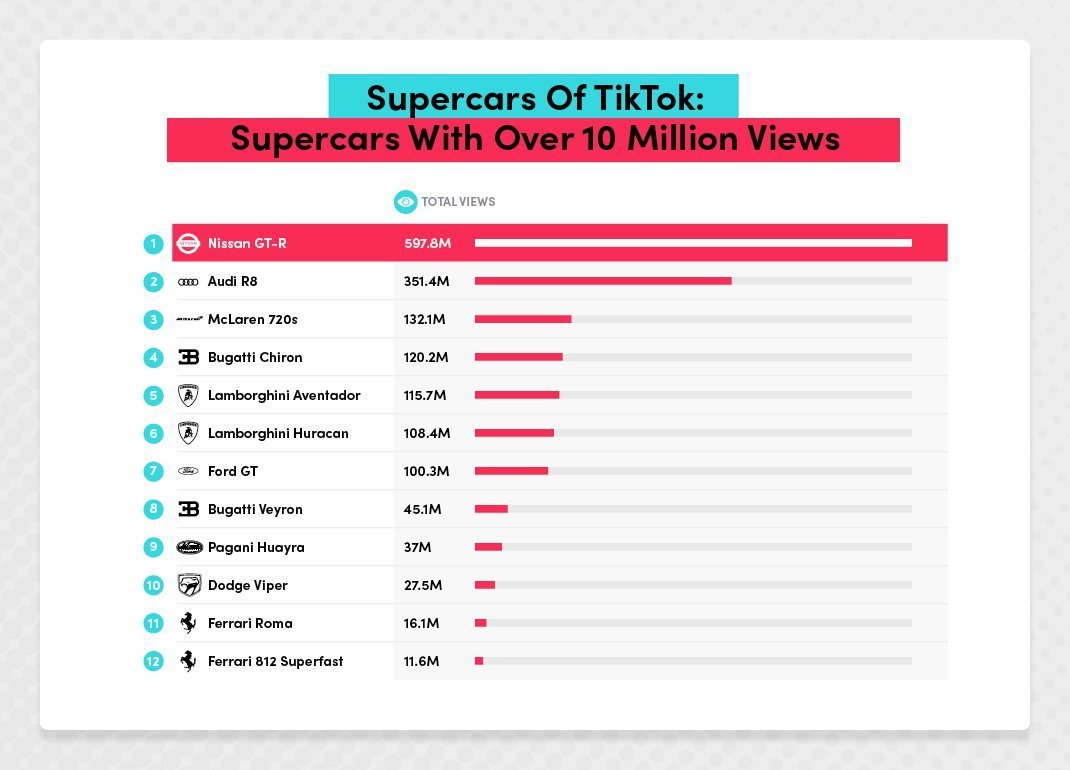 Finally, we looked to see which supercars were being viewed the most on TikTok.

Looking at the top 12, it’s unsurprising to see Lamborghini, Ferrari and Bugatti dominating the views but what we didn’t expect to see is that they’d all be beaten, and by a long way, by two cars that are considerably cheaper and more common, with the Audi R8 and the Nissan GT-R.

The Nissan GT-R in particular is clearly TikTok users’ favoured car, so much so that the GT-R has been viewed more times than both the Lamborghinis and Bugattis in the top 10, combined.

* All data and estimations were compiled in April 2021.

Here at Leasing Options, we have a great range of car leasing deals on the top viewed cars on TikTok, like the Nissan GT-R. Find the perfect car for you with our and make sure to check out all our special deals that you won’t find anywhere else.

If you need any help or have any questions, our specially trained team is always on hand to get you up and running with your next brand new car.