The Evolution Of F1 Circuits

As we roll on towards the latter stages of the F1 calendar, we thought we’d take a moment to delve into the history of some of the circuits on the calendar that have been raced on for decades and see how much they’ve changed since they were built. 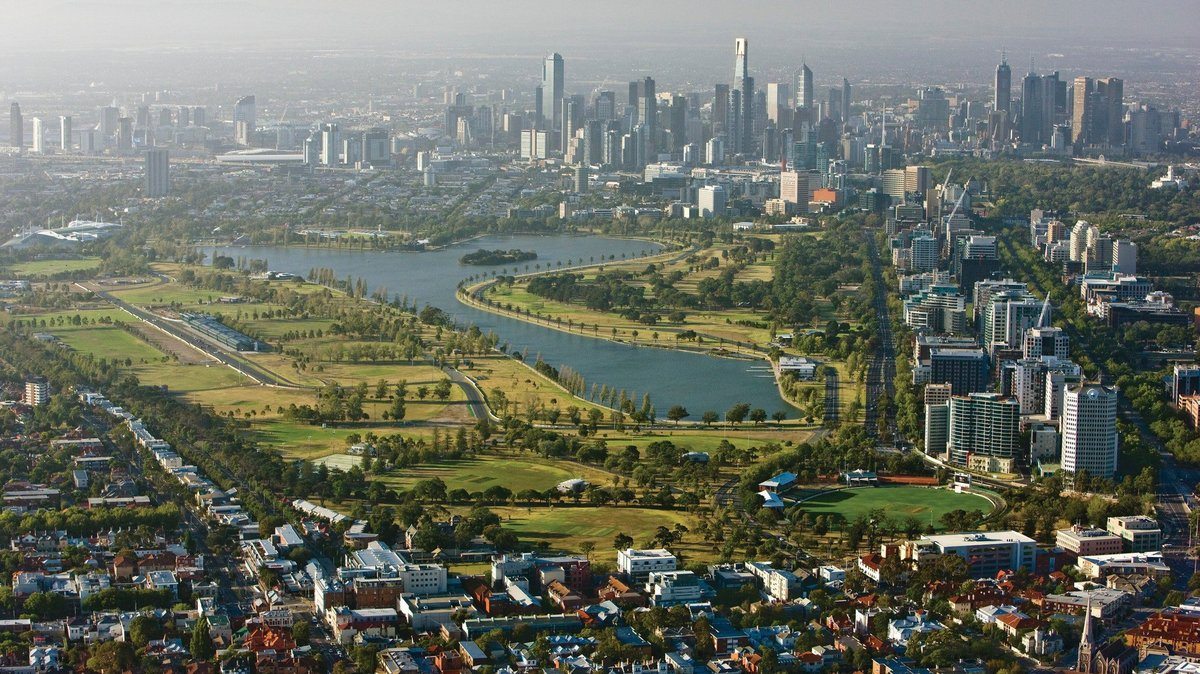 The first track we’ll look at is, and has been for a while now, the first circuit on the F1 calendar, Albert Park. The Australian Grand Prix moved from a location known as Fisherman’s Creek in 1953, where the circuit would be formed along public roads around the park but unfortunately the Grand Prix only lasted around five years before it was brought to an end in 1958 due to political issues. For more than 30 years the park fell silent until in 1996 the Australian GP returned to Albert Park thanks to a new state Premier who brought it back to help boost tourism to the region.

When it returned racing took place in the opposite direction and the track’s only section that was the same was Lakeside Drive. Since then only a few amendments have been made including the removal of the Pit lane chicane and when the V8 Supercar circuit was made, the F1 circuit gained an extra 0.001km. 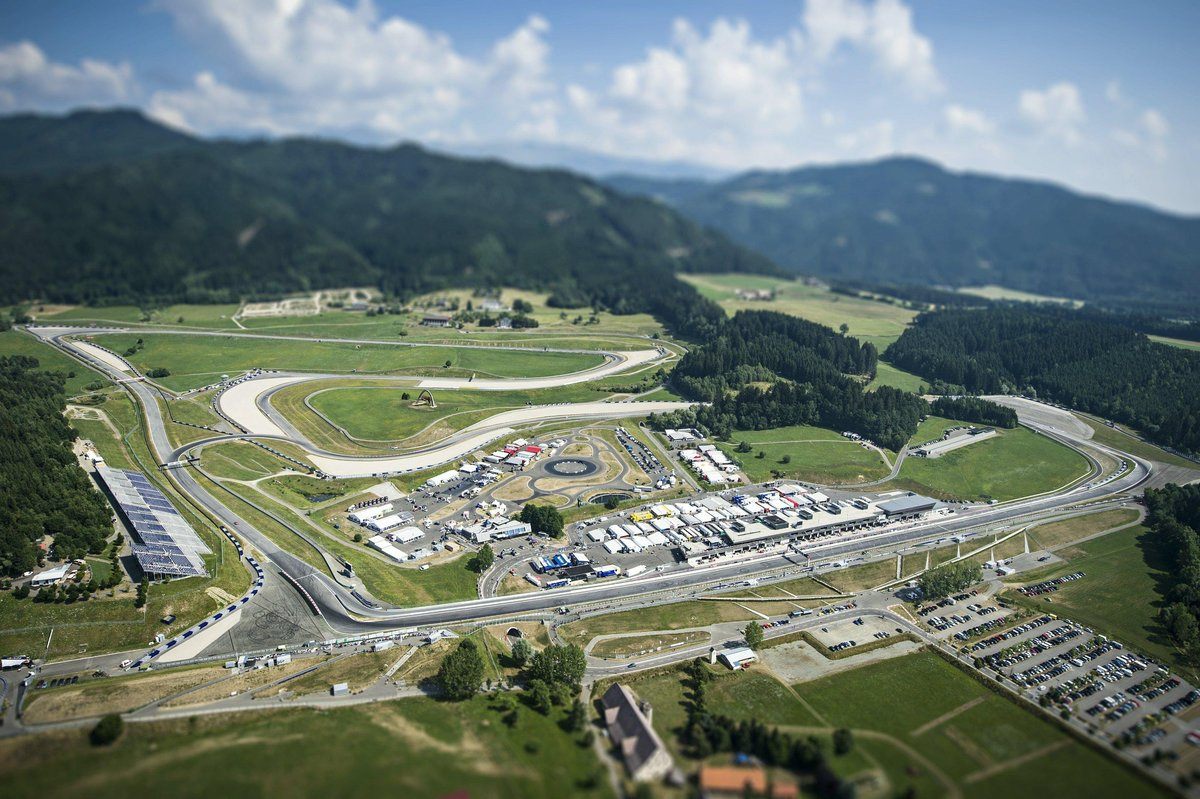 The Red Bull Ring was born in 1969 under its original name ‘Osterrichring’ and was a fast circuit with similarly breath-taking views of the Styrian hills. Unfortunately, it proved to be too fast and after a severe crash in ’75 the first corner was slightly tightened to reduce speeds and a chicane was then added to the corner to reduce speeds even further. However, this still didn’t prevent crashes and due to its dangerous nature, the track was dropped from the F1 calendar.

As a result, the Bosch-Kurve was tightened and the track was widened in places including the start/finish straight that was made three whole metres wider. By 1996 full renovations were complete and F1 racing returned to the now named A1-Ring. The circuit had been dramatically shortened, bypassing the section from Hella-Licht and Tiroch with a new section ending in a tight hairpin before rejoining the old track. The Bosch-Kurve was also replaced by another hairpin and the Texaco-Schikane was also tightened to a squared-off Rindt Kurve.

Alas, due to financial reasons, the circuit was sold to Red Bull who had big plans for the circuit, but this wasn’t enough to save the Austrian F1 race as plans were blocked by local authorities. But, in 2014 the F1 calendar did return to a once again renamed Red Bull Ring.

Plans are in place to extend the circuit but as of yet, no development has been completed. 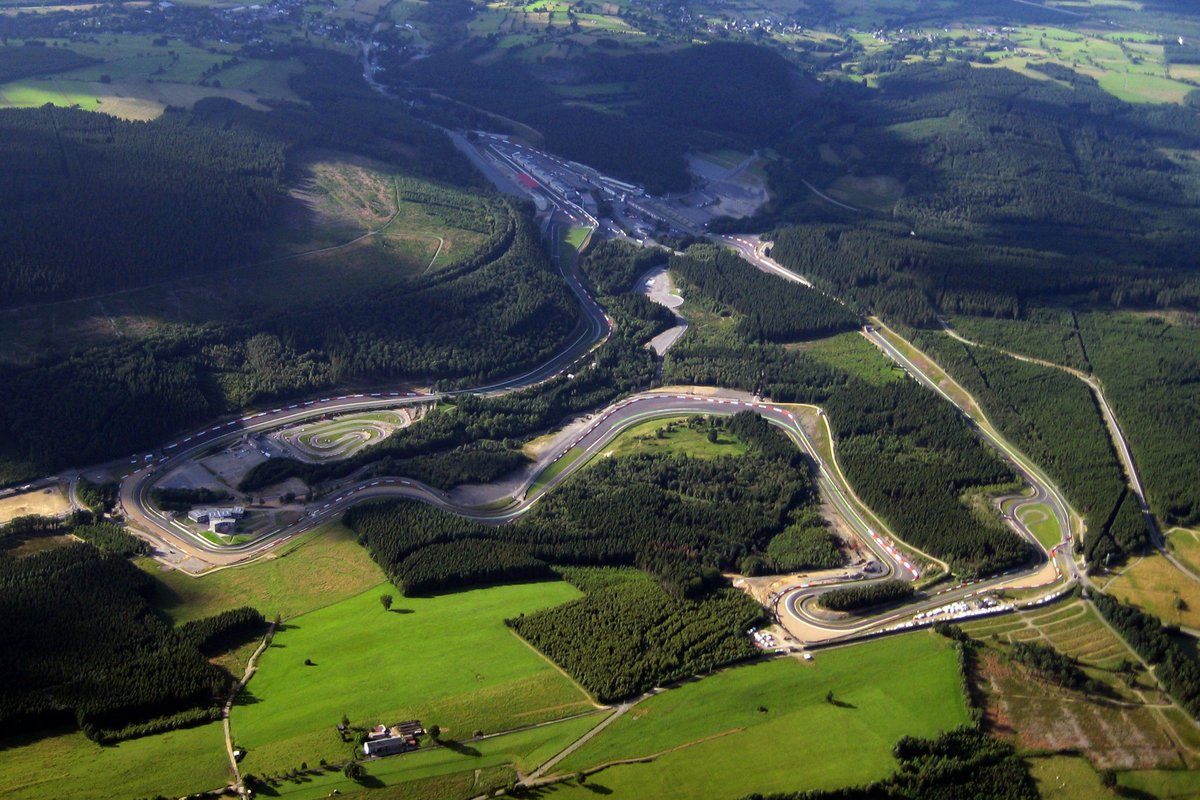 Racing began on the streets of Spa-Francorchamps in the year 1921 as it was perfect for long straights and it’s rolling countryside roads. The only stretch of the circuit that changed was the then known Malmedy chicane that would be removed and used again over the course of an eight-year spell but then finally in 1939, one of the most iconic sections of an F1 circuit was born when the race organisers removed the Virage l’Ancienne Douane, creating the super-fast uphill Eau Rouge sequence, loved by racing fans to this day.

Racing stopped at Spa-Francorchamps due to World War II and resulting repairs had to be made, one of which was a new corner at Stavelot. Between 1971-1978 the Malmedy chicane temporarily returns but is removed again, but then in ’79 it was obvious major changes needed to be made as more and more fatalities occurred on the track. As a result, cars began turning off the old course before Les Combes and headed down the valley through a fast course before Blanchimont.

Shockingly, the circuit was dumped from the F1 calendar in 2006 due to further track improvements failing to materialise but thanks to increased funding in ’07, new Pit facilities were implemented as well as a revised final section enabling the F1 calendar to return. 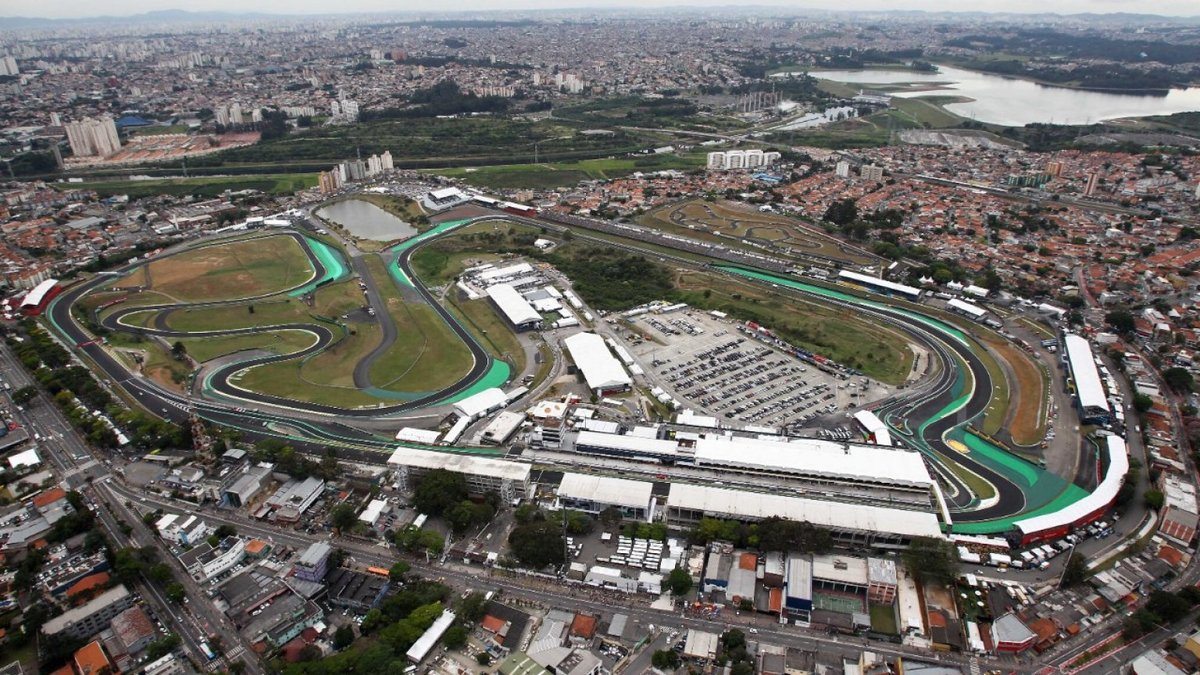 Racing at Interlagos was supposed to begin in the year 1939 but due to poor weather conditions, it was postponed until the following year. It held motor racing up to 1967 when extensive safety renovations couldn't be put off any longer.

Racing started again in ’71 but it wasn’t until ’73 when it hosted Formula One. Unfortunately, Interlagos’ new safety features weren’t good enough for the F1 drivers, who complained about its general safety and as a result, F1 racing was pulled.

Before returning in 1990 the track went under a series of extensive changes in preparation. New garages and a race control tower were built with the track being reduced significantly to comply with the new trend for shorter circuits. A new first turn bypassed the old banked corner, plunging downhill and connecting with the old circuit at Curva do Sol and heading in the opposite direction to previously to a revised and tightened corner between the lakes, before heading back up the hill and re-joining the original infield and the climb back to the Pits.

Since these changes, only minor Pit lane alterations have been made and it’s known around the world as one of the best circuits in motorsports. 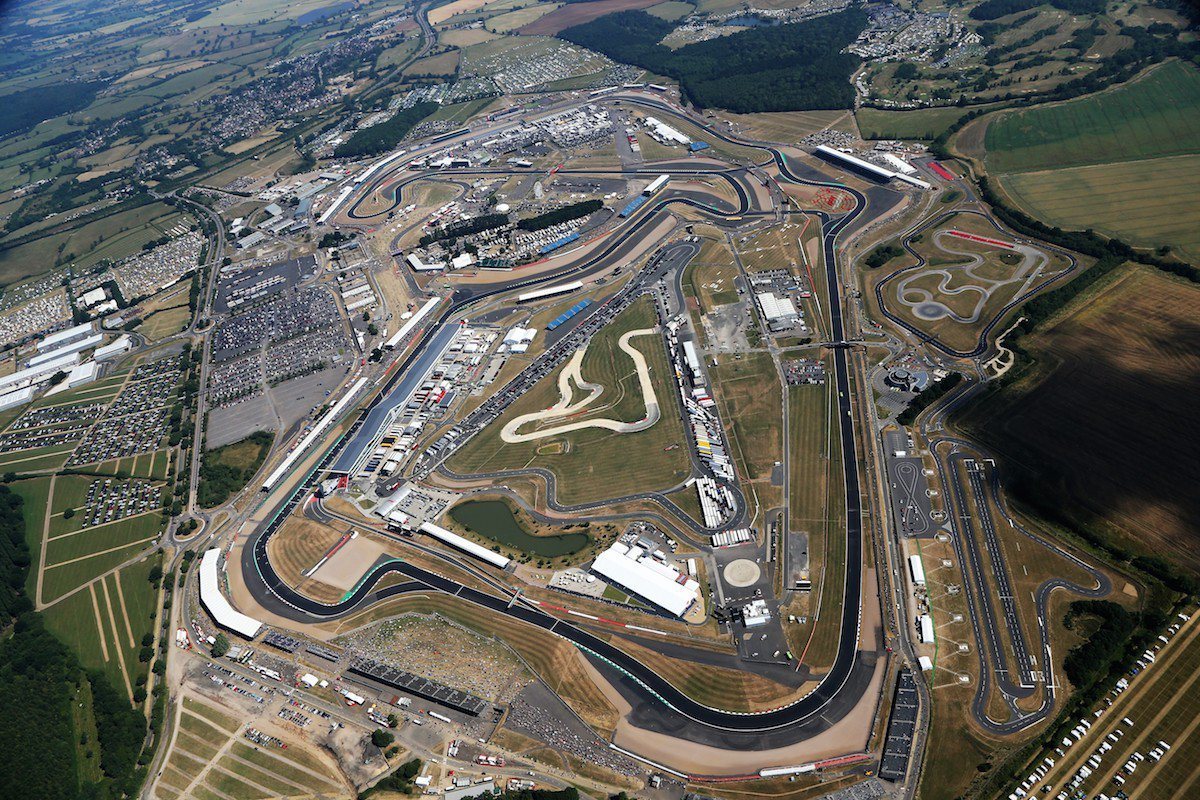 The first Grand Prix at Silverstone took place in 1948, but the course was a lot different than it is today. The course was previously used as an airbase and the original track used both runways left over from when it was converted. The circuit was altered a year later to use the airport’s perimeter roads as it was a much safer option, as previously drivers hurtled towards each other with only a blank canvas to protect them from over-shooting tight corners and colliding with oncoming cars.

In 1952 the Pit lane was relocated and then before the ’75 Grand Prix a new chicane was added to reduce speed into Woodcote corner and speed was further reduced with the implementation of the Bridge chicane giving Woodcote its original layout.

The early 90’s saw some of Silverstone’s most significant changes. Copse radius was increased, Maggots and Becketts were given esses, Vale was introduced in between Stowe and Club, an elevation adjustment beyond Abbey was implemented. The biggest change was in the final sector that saw a right turn at Bridge before introducing new corners Priory, Brooklands and Luffield.

Safety concerns grew for Silverstone after the deaths of Roland Ratzenburger and Ayrton Senna that led to corners being tightened at Stowe and Copse, which also had its run-off area increased. Abbey was given a chicane, Vale was straightened into a tighter Club left apex, Priory and Bridge were moved closer together with the Pit lane moved behind a safety wall.

In ’96, it was great to see a change that increased speed rather than reducing it, as Stowe was re-profiled to today’s configuration, giving the corner a fast sweep. This trend continued over the next few years with Copse, Priory, Brooklands and Luffield getting a redesign that resulted in a faster track. The Pit lane entry was also straightened during this period to minimize the time it took for drivers to get from the circuit to the Pits, and once the entry to the Pits had been altered, the track’s Pit exit was reduced, again to allow drivers to re-join the race quicker.

In 2010, a new infield “arena” was created in time for it to be unveiled at the 2011 British Grand Prix. Changes introduced new corners after Abbey, Farm, Village, The Loop and Aintree, which would all need to be taken before arriving back at Brooklands. And finally, in 2011, the start/finish straight was moved from between Woodcote and Copse to between Club and Abbey. 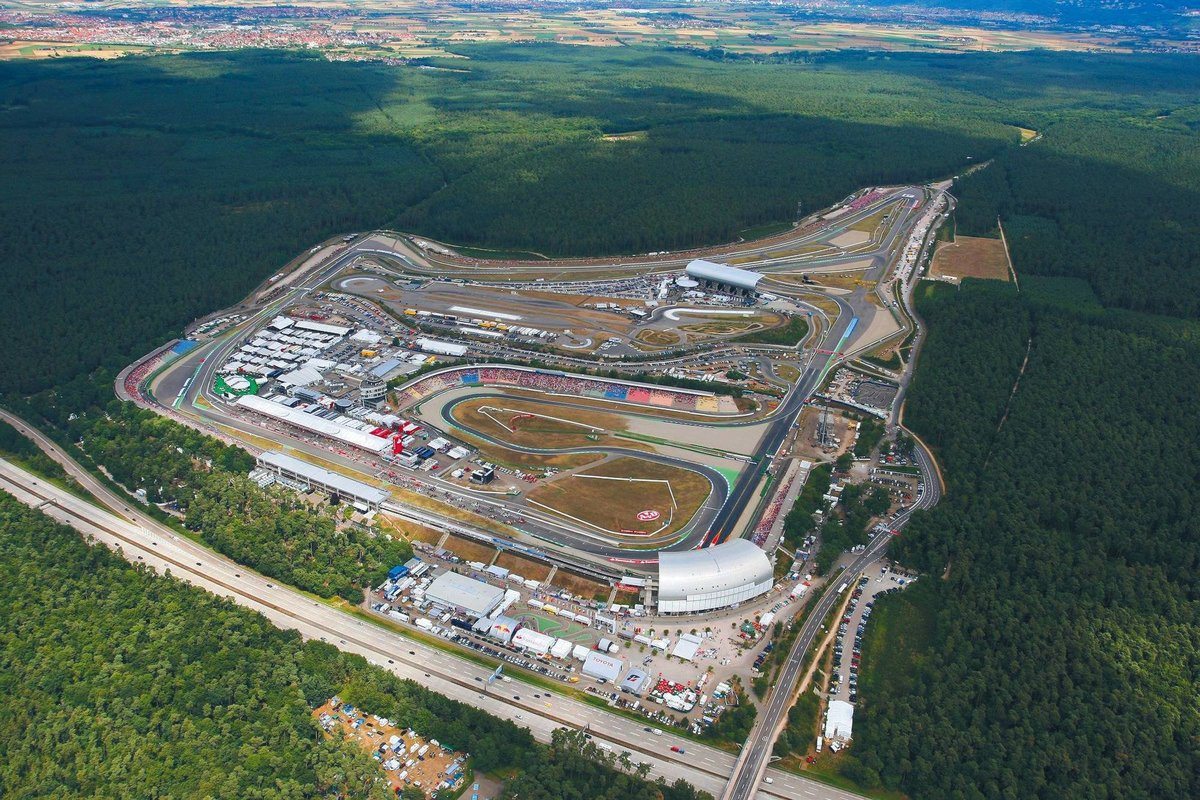 The approval for a new race track was given the green light on Christmas Day in 1931 with construction beginning on Germany’s newest race track in March. The track’s first fundamental changes were made in 1938, adding in the eastern fast curve known as the Ostkurve. Then in ’66, over the two-year spell, the circuit was revamped with the inclusion of a new 'motodrome' section, boasting a new Pit-straight, a fan-friendly stadium and a short course running clockwise.

The first F1 Grand Prix to be staged at Hockenheimring happened in 1970. In preparation, two chicanes were inserted on the two main straights, with a new Pit lane constructed 10 years later. The Ostkurve was given a chicane om ’82 and was further refined, again, 10 years later. ’94 saw the new chicanes tightened to make them tougher and slower.

Up until 1999, these were the only changes that have been made to the Hockenheimring, however, in 1999 plans for a full reconstruction were laid out to keep the F1 Grand Prix at the circuit. A slight straightening to the Pit lane was made this year but in 2002 work began on the major changes including drastically shortening the track, replacing the long-forested section with more tight corners at a cost of 62 million Euros.

F1 is an ever-changing sport. As the mechanics and technicians find ways to make their cars faster and the governing bodies strive to bring more excitement into their races, we’re sure it won’t be long before more changes are made to these circuits.