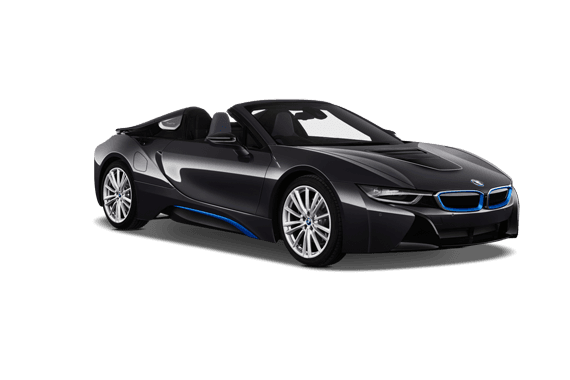 When BMW launched the i8 coupe in 2015, it was welcomed by car enthusiasts who feared that the increasing shift towards electric power would spell the end of driving enjoyment.

The BMW's interior is almost as unconventional-looking as its exterior – dashboard elements spread across the width of the car like tree roots over the ground and the eye is never short of things to look at.

Unlike the i8 coupe, the Roadster is a strict two-seater. Where the coupe has a very tight pair of occasional rear seats for use by children, the Roadster instead gets a useful 100-litre additional storage area – the rest of the space is consumed by the electric roof mechanism.

The i8 Roadster tackles corners confidently and accelerates with typical electric urge, which is given a more sporting feel when the petrol engine pipes up with its three-cylinder growl.

The i8's combined petrol and electric powerplant is rather different to other plug-in hybrid models, as it emphasises the electric side of things, with the petrol engine there to keep the batteries charged and provide extra thrust when needed.

In pure electric mode, the 141hp motor sends power to the front wheels, allowing a top speed of 75mph and a range of up to 33 miles before the petrol engine has to cut in.

At Leasing Options you’ll be getting the best possible deal on the BMW i8 Roadster, thanks to our Price Match Promise. And, if you require any assistance, our friendly customer service team are always on hand to answer any questions you may have.

of Personal leasing I8 deals showing