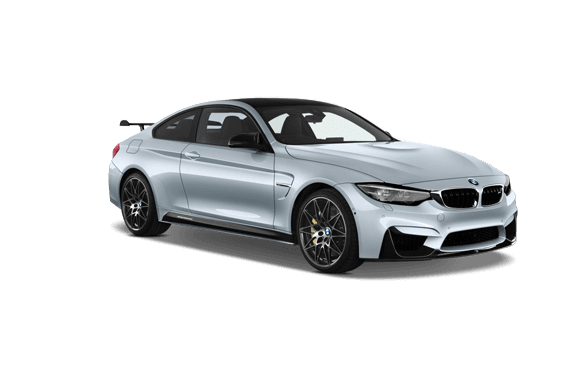 The BMW M4 offers a superior driving sensation, coupling the unmistakable 'M' performance and handling with the practicality, space and technology of the popular 4 Series coupé. Incorporating the same 3.0 litre straight-six, twin-turbocharged engine that offers all that monstrous power in the M3, this latest unit offers better economy and greater output than the V8 it replaced. Take a look at our latest BMW M4 lease deals to find out more about this fantastic vehicle.

BMW have gone all-out to produce an eye-popping stance for the M4, delivering a streamlined body that even has specially designed wing mirrors which minimise drag and a duck-tailed rear spoiler to confirm to the motoring world that this is a true, focused sportscar. Sleek, refined and so very stylish, BMW M4 leasing is only a telephone call away.

BMW’s M4. The name might not be familiar but the driving experience certainly will be for fans of the Munich maker’s motorsport division and the four generations of M3 models whose heritage this covetable coupe builds upon. Turbo technology features for the first time but you can still have a manual gearbox and, as ever, there’s a Convertible option for those who want it. However you like your M4 though, one thing’s guaranteed: a proper driving experience.

So, what’s this BMW really like? Like no other 4 Series coupe, that’s for sure. You realise this as soon as you hit the start button and the twin turbo straight six engine fires up with a throaty roar. The noise may not be quite as emotive as the revvy V8 used in this M4’s direct E90-series predecessor but it’ll still alert the neighbours to the fact that something rather special is.

With a big normally aspirated engine fitted up-front, the previous generation version of this model required selection of a lower gear for instant acceleration below 4,000rpm, so you constantly had to keep the engine spinning, which was fun if you were in the mood but a little tiring if you weren’t. Thanks to 550Nm of pulling power this time round, that’s not necessary here: plant your foot in almost any gear and it goes. Very fast, 50 to 75mph in 4th occupying just 3.5s in the manual model and 4.2s in this auto version. True, there isn’t the razor-sharp throttle response you only get from normally aspirated induction – and I rather miss that. But turbo lag is slight and, once the blowers have spooled up, they’re your passport to absolutely ridiculous speed.

Overall, there’s no doubt that this remains the proper driver’s tool its predecessors always were. It’s not as light and chuckable as those earlier M-cars: weighing in at 1,500kgs, it could never be. But then BMW makes an M235i model you should try if that’s more the kind of thing you’re seeking. The M4 has moved on – but kept the spirit of the original.

The 4 Series coupe is a smart piece of styling, it’s also become a rather menacing thing, sitting 47mm lower to the ground than its M3 saloon stablemate and offering a feeling of real width in its design, especially when you view from the front and take in the wider flared wheelarches, the characteristic powerdome on the classic long bonnet and the way the deep front spoiler with its trio of air intakes sits purposefully beneath the trademark double-slat kidney grille. These unique aerodynamically-optimised twin-stalk side mirrors with their translucent LED indicators are bespoke too.

Predictably, the M4 Convertible model is even more stylish, provided you’ve retracted its metal-folding top, a process that occupies 20 seconds.

Whatever your choice of bodyshape, inside you’ll be greeted by an intuitively-designed cockpit, the centrepiece of which is the M leather steering wheel with its MDrive buttons for personalised vehicle set-up. On M Double Clutch Transmission models, you also get gearshift paddles with a cool metal finish. Through the stitched wheel, you glimpse a purposeful set of Motorsport-derived dials, with a segment beneath the rev counter showing the various suspension, throttle and steering set-up options you’ve chosen. The deep-set leather-trimmed heated, electrically-adjustable M seats, with their contoured sides, integrated headrests and pronounced raised elements.

Well, it’s certainly interesting to note that, unlike its direct M3 predecessors, this M4 is being built in exactly the same factory on Munich’s Preussenstrasse that was used to construct the car that started this iconic model line back in 1985, the E30 M3 coupe. That fact apart though, there's not actually a lot of commonality between that original and its modernday interpretation. The focus has changed from a raw, track-tamed screamer to something a lot more measured.

Steering and throttle response aren’t quite as sharp as they were in this model’s predecessor. Nor is the engine note quite as memorable. Many will feel though, that these are small prices to pay for the much bigger benefits offered elsewhere. And the fact that this still remains the most exciting and involving car of its kind. Even its closest rival, the Mercedes-AMG C63, can't come close to this M4's agility and driver feedback. So yes, if this is progress, I'll take it. In Austin Yellow metallic, with the twin-clutch gearbox, the head-up display and a set of carbon brakes. I'd better start saving.