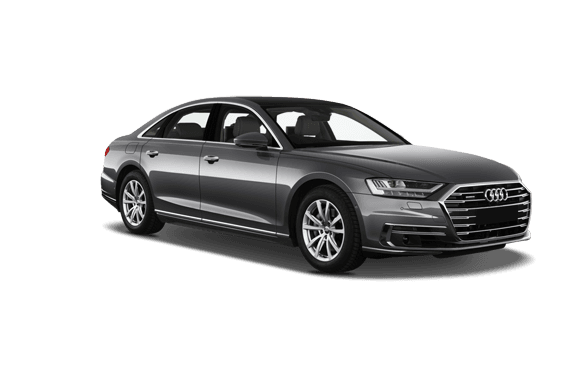 Audi sumptuous flagship saloon comes with Level 3 autonomous driving included, as well as an all-hybrid engine range and a huge amount of interior tech. All models available to lease have mild-hybrid drivetrains and air suspension.

The exterior features sharp styling touches and a more angular version of the company’s signature grille, which is flanked by laser headlamps and a full-width OLED light bar at the rear.

Inside, the dashboard has been tidied up, with a dual-screen set-up that’s highly integrated, and both responsive and fully-featured. It’s a logical layout and easily mastered, especially given the haptic feedback system that makes the onscreen buttons feel like physical ones.

The seats are large and comfortable, with plenty of storage space in and around the front of the cockpit. Rear-seat passengers get the option of being able to recline, as well as get their own screens to control various functions as well as watch TV or another video source. There’s even an optional foot massager.

Just two trim grades are offered on the A8, Standard and S-Line. Being the flagship saloon in Audi’s impressive line-up means the car should really be regarded as a well-equipped base to build upon with options.

The A8 is powered by a pair of V6 engines – a 3.0-litre TFSI turbo petrol with 286hp and a 3.0-litre TDI turbodiesel with 340hp. But the range is expected to expand to include a V8 diesel and eventually the W12 petrol, as deployed by Bentley.

Whichever Audi A8 lease deal you choose, at Leasing Options you’ll be getting the best possible price thanks to our Price Match Promise. And, if you require any assistance, our friendly customer service team are always on hand to answer any questions you may have.

of Personal leasing A8 deals showing

The A8 is Audi’s largest luxury saloon which in improved third generation guise is smarter, more efficient and full of technology. Better established badges in this sector may be tempting but they can’t offer many of the almost unique things this car brings to this segment: 4WD, V8 diesel power, Cylinder-on-Demand efficiency and cleverer Matrix LED headlamps are just a few examples.

Audi is used to winning. It's got extremely good at it, continuing to push technological boundaries wherever it can to stay a step ahead of its rivals. And the best place to see Vorsprung Durch Teknic at work? Well it has to be here doesn’t it, with the brand’s top A8 large luxury saloon, in this guise further improved in revised third generation form.

The 3.0 TDI with its 258PS diesel now 8PS pokier, so zero to sixty two is just 5.9s away, which is quite as fast as you’d want to go in this class of car. Even if you ignore their efficient fuel figures, both the diesel variants feel more flexible than the similarly-priced petrol options, a 3.0-litre TFSI V6 that uses a supercharger to achieve its 310PS (20PS more than before) and an even less justifiable 4.2-litre FSI V8 variant with 435PS (15PS more). You can’t fault their levels of performance though. The supercharged 3.0-litre unit makes 62mph in 5.7s, while the biturbo V8 manages it in 4.6s, with both, like virtually all A8s, needing to be artificially restrained at 155mph. That V8 is also used in uprated 520PS form in the S8 sports saloon, which continues on much as before, powering to 62mph in just 4.1s. Captains of industry meanwhile, can still order the mighty 500PS 6.3-litre petrol W12 flagship model.

The A8 experience is luxury personified, with almost everything programmable to your mood. Though this isn’t quite the most rewarding driver’s car in its sector, there are so many factors that contribute to its status as arguably the most complete one. Highlights? I’d go for the achingly clever optional Matrix LED headlamps. Here, the party trick is the way they can stay on high beam all the time while using a camera mounted at the top of the windscreen to react to other traffic by dimming or turning off individual LED clusters. That means other motorists won’t be dazzled but the both sides of the road around you and the oncoming way ahead will still be completely full beam-lit. The system can even detect animals and also pedestrians who get a pulsing LED flash alerting your approach. Once you’ve driven regularly at night with this system, you won’t want to be without it.

The A8 tends to maintain a cool studied elegance in its design and in that respect, little has changed here. Now though, it’s got a touch more personality too. Four creases run down the sleeker bonnet to the upper edges of a more sculptured and richly detailed hexagonal singleframe grille, its horizontal double bars underscoring this car’s class-leading width: it’s longer and lower than its competitors too. The headlights are also flatter and wider, functioning with a brilliant crystal shine from optional Matrix LED technology that sets new standards in this segment. Further down are air inlets in the redesigned lower apron that now extend all the way across the width of the front and are framed in chromed clasps.

Once inside, you’re ensconced in a world of measured elegance, beautiful ambient lighting and hand-sanded and varnished wood panels. Standard A8s get the usual three-person rear seat that rather emphasises the slight narrowness of this cabin in comparison to obvious rivals. Upfront, there’s the same luxurious blend of craftsmanship fused with technology, with a wrap-around dash fashioned in a wide arch that spans the cabin, encircling the slim, low instrument panel. You view it through a leather-trimmed electrically operated multi-function steering wheel that, according to preference, comes with either three or four-spokes and reveals large black-faced dials featuring clear, classic graphics and red needles. Not that you’ll need to look at these if you’ve opted for a head-up display that projects key driving information directly into your line of sight at the bottom of the windscreen.

This A8 is an impressive achievement. Every car in this segment is. As it should be, this is a showcase for Audi’s best and most advanced technologies, aluminium construction and quattro all-wheel-drive now joined by astonishingly clever industry-leading headlamp technology and Cylinder-on-Demand efficiency. Add in classier design and a range of engines that are pokier yet cleaner and more frugal and you’ve a formidable luxury saloon.

Hugely capable, innovative, beautifully built and able better than any rival to alter its dynamic character to your driving mood, this is the car that rivals always feared Audi would build. And if you’re in this market, it’s one you need to try.