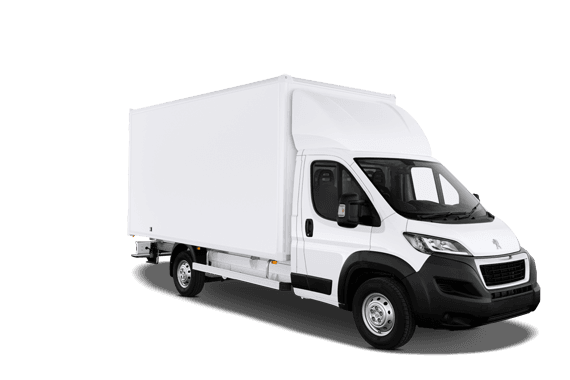 With a choice of economical engines and loads of kit available the Boxer is a real all rounder of a van. Take a look at the latest Peugeot Boxer lease deals available now at Leasing Options.

Peugeot have made a genuinely attractive looking vehicle both inside and out, and it's not just a good looking van either, the Boxer has low running costs and best in class load carrying capacities. Get in touch with our team now if you think Peugeot Boxer leasing could be for you.

Peugeot has given the Boxer, its biggest van, a fighting chance in the large panel van sector due to strong, sensible design that will appeal to careful operators. On paper, the improved third generation version certainly looks to be a van that can, for no direct rival can significantly better either its payload or its load-carrying capacity – and few can equal its low costs of operation. Equipment levels are also superior to those of many obvious rivals. In other words, it aims to score in the areas that really matter to business users.

On the move, there’s the kind of high, commanding driving position you’d expect from a large van of this class, your lofty perch offering great panoramic views of the road ahead. As for motive power, well Boxer drivers get the same three 2.2-litre HDi diesel engines that PSA Group partner Citroen offers in its rival Relay model, these developing either 110, 130 or 150bhp and all featuring a revised injection system for greater efficiency. At the top of the range, to suit those operators likely to be covering longer distances with heavier loads, Peugeot also offers a 3.0-litre HDi unit with 180bhp on tap, an engine unique to this Boxer.

What else? Well, if you were used to the pre-facelift version of the third generation Boxer model, you’ll immediately notice that the van is quieter at speed. This is due to its considerable under-body and upper body strengthening aimed at producing greater durability as well as that extra refinement. The brakes have also been revised and feel a bit more effective.

The days when panel vans were nondescript clones of one another are thankfully behind us and the Boxer’s stubby frontage is certainly distinctive. The headlights and front grille have been re-styled for the improved model to create what the brand hopes is an ‘expressive, feline and technological’ look inspired by the current range of Peugeot cars.

A fresh additon for the improved MK3 model Boxer is a 5-inch dash-mounted touchscreen infotainment display which makes the vehicle feel more modern inside and comes as standard, providing you avoid entry-level trim. As well as the usual stereo and Bluetooth elements, this handles features like audio streaming, text-to-speak messaging and satellite navigation.

A great deal of emphasis has been placed on rendering the Boxer as user-friendly as possible which is why Peugeot offers a choice of four lengths, three wheelbases and three roof heights.

Moving inside, let’s start with the headline stat that most operators tend to look for first – load volume. At the bottom of the range, the smallest short wheelbase standard roof ‘L1H1’ model will give you 8.0m3. That’ll increase to 10.0m3 if you up the wheelbase to ‘medium’ level and get an ‘L2H1’ derivative. Or 11.5m3 if you also up the roof height to ‘high’ spec with an ‘L2H2’ derivative, and with that same roof height, the ‘L3H2’ variant that delivers a useful 13.0m3 of volume. From here, if that’s still not big enough, you can get either an ‘extra-high’ roof (in the ‘L3H3’ model). Or an ‘extra long’ wheelbase (in the ‘L4H2’ variant). Either way, you’ll have 15.0m3 of cargo space to play with inside. At the top of the range, an ‘L4H3’ variant that has both the ‘extra high’ roof and the ‘extra long’ wheelbase would give you a massive 17.0m3.

Perhaps though, you’re more interested in the length of loads you’ll be able to carry. Well, pretty much everything you can think of will probably fit. Load lengths vary from 2670mm in the smallest ‘L1H1’ variant I mentioned to a huge 4,070mm in that ‘L4H3’ range-topper.

Loading height will of course be important too. As I mentioned, there are three roof sizes, the ‘standard’ roof giving you 1,662mm of internal roof height, the ‘high’ roof upping that figure to 1,932mm and the ‘extra high’ roof increasing the figure still further to 2,172mm.

On to vehicle weight, something it’s important to get right as it’ll determine how bulky the stuff you’ll be able to carry can be. There are five ‘GVW’ ‘Gross Vehicle Weights’ you can choose, designated by the first and the last of the three figures in the full model name. With all of that sorted, we can talk payload, an area where Peugeot reckons this design has a key advantage. Even the least capable Boxer model, the smallest ‘330 L1H1 derivative’, can manage 1,155kgs of weight, while the most capable ‘440 L4H2’ variant can deal with an impressive 1,885kgs.

On to running costs. If you’re looking at either the 2.2 HDi L3 130bhp variant, you’ll be able to pay another couple of hundred pounds to get your Boxer with the Stop/Start system and improve your fuel economy and CO2 figures by about 5%. This particular vehicle manages 39.2mpg on the combined cycle and 189g/km of CO2, which is a pretty impressive showing for a large van with a Gross Vehicle Weight of 3,300kgs.

The French brand has clearly thought long and hard about what operators actually want. The longer service intervals are welcome, as are the more efficient running cost returns and greater cab refinement. Plus, the Boxer’s smart infotainment screen and its optional Grip Control system are genuine points of differentiation in this segment.

In the increasingly closely fought large panel van sector, the Boxer looks to have the full package required to make a name for itself.