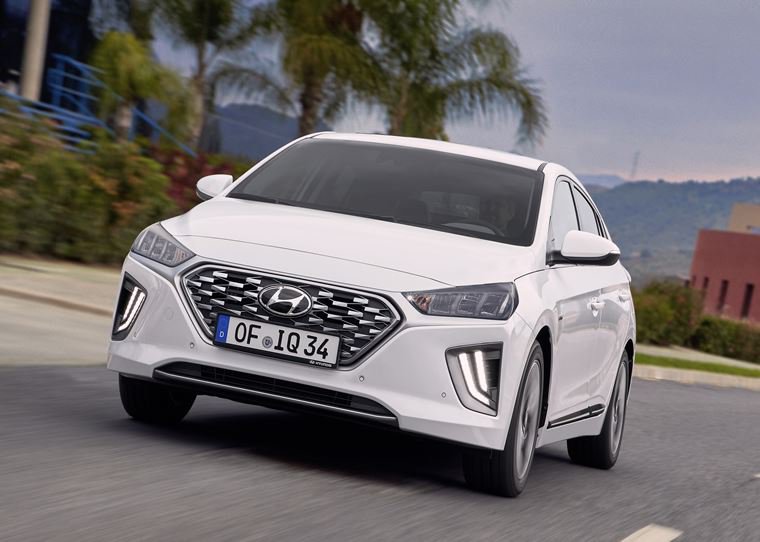 The Ioniq was Hyundai's first ever production hybrid car – one that still has its gun sights locked onto its main rival, the Toyota Prius.

Hyundai doesn’t do things by half and the Ioniq is Hyundai’s triple-whammy; it is available as a Hybrid, a PHEV (plug-in hybrid) or as an EV (fully electric vehicle). All three variants received a mid-cycle refresh both inside and out for their 2019 model year. 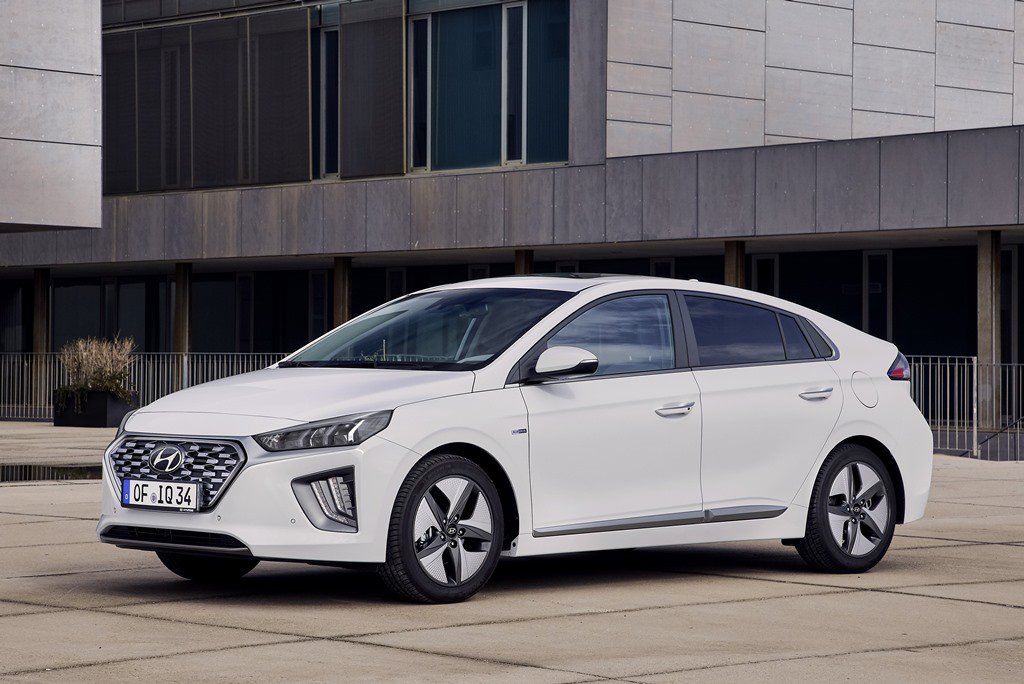 Underneath the Ioniq is the same platform that underpins the award-winning KIA Niro, which, with its raised SUV styling, is where the similarity pretty much ends. The hybrid weighs just 1,370kg – thanks to some smart weight-saving in its construction.

This trio of efficient Ioniq models is an attempt by Hyundai to appeal to a broad range of budding eco-drivers. The Hybrid derivative of the Ioniq makes up the majority of the trio’s sales, so we took a closer look… 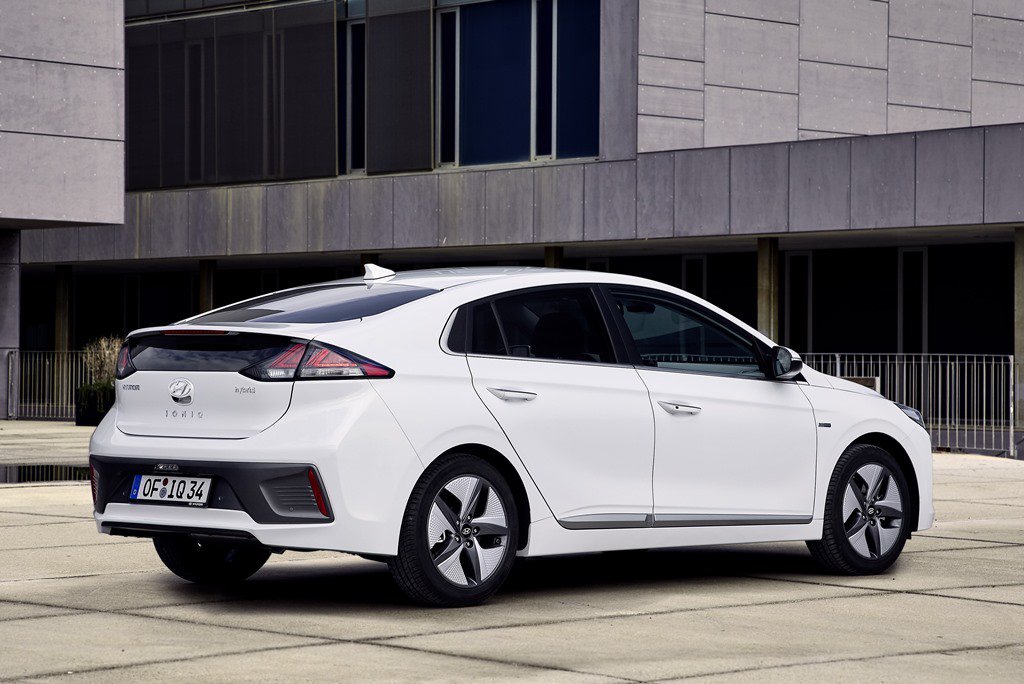 2019 exterior updates included new LED lights at the front and rear, along with a new grille and alloy wheel designs. 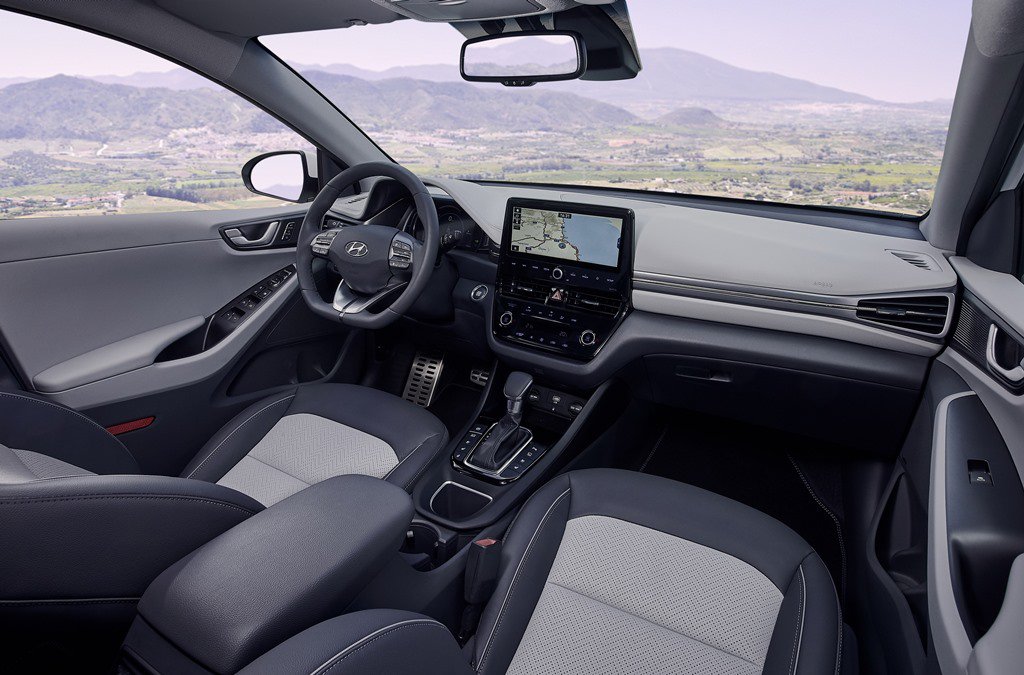 The interior of the Ioniq is conventionally laid out – there’s little to remind you of the sophisticated technology under the metal. It’s solid and well-designed and while it may not be an inspiring place to sit, it's at least easy to use. Despite its technology, the Ioniq Hybrid is still a car that anyone will be able to jump in and drive straight away.

Up front, large areas of dark – but high quality – materials are broken up by electric-blue stripes around the air vents, touchscreen, upholstery and start button. But where the updated Ioniq impresses is for in-car technology.

Facelifted cars benefit from the availability of a much nicer 10.25-inch touchscreen (standard on all but base spec models, which get an 8.0-inch version).

Pick the larger screen and you get Hyundai’s ECO Driving Assistant System, which uses information from the satnav to advise the driver the best time to decelerate, in order to minimise brake use. Gradient data also helps the car set itself up in the most efficient way possible, planning ahead for long stretches uphill, for example.

Live services including traffic and fuel information are embedded into the larger screen's maps, plus you can link two phones at the same time via Bluetooth. All cars get Apple CarPlay and Android Auto, too. 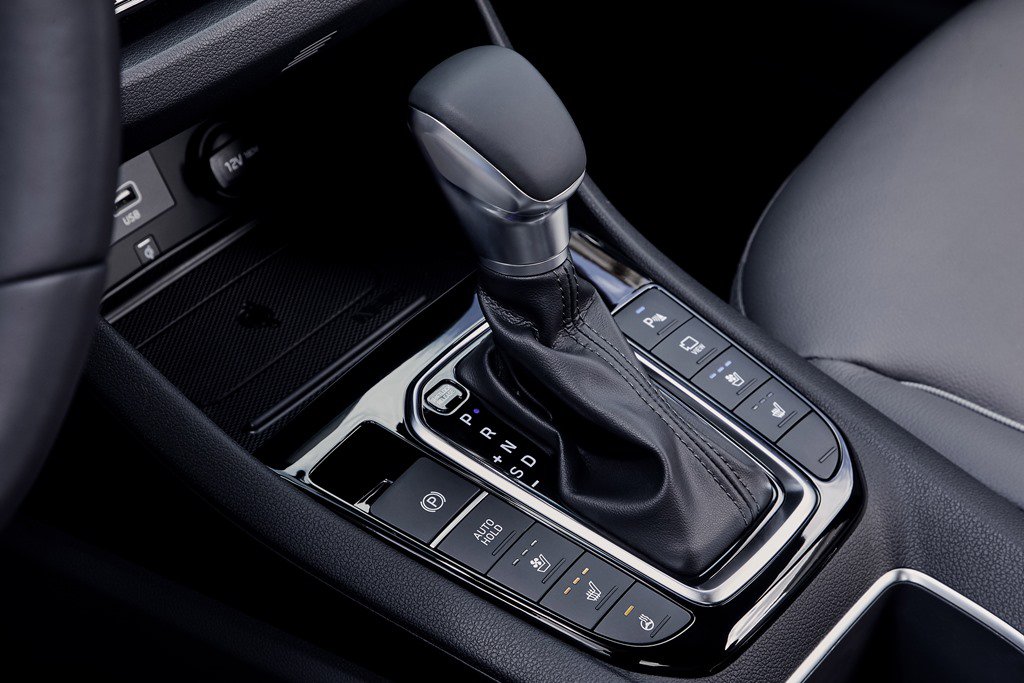 New for the 2019 Ioniq is a built-in SIM card, allowing the car to stay online. This brings lots of advantages, from live traffic updates to the ability to connect to your car remotely via a dedicated BlueLink smartphone app, changing settings like the air-con.

Unfortunately, Hyundai has moved the climate control settings to the touchscreen for the facelift. The manual controls fitted before were more logical and less fiddly, which makes its introduction a rare step backwards for Hyundai.

It’ll comfortably accommodate a small family, too. The Ioniq provides space to spare for front and rear-seat occupants alike, as well as an impressive 443-litre boot with more capacity than that of the Toyota Prius. 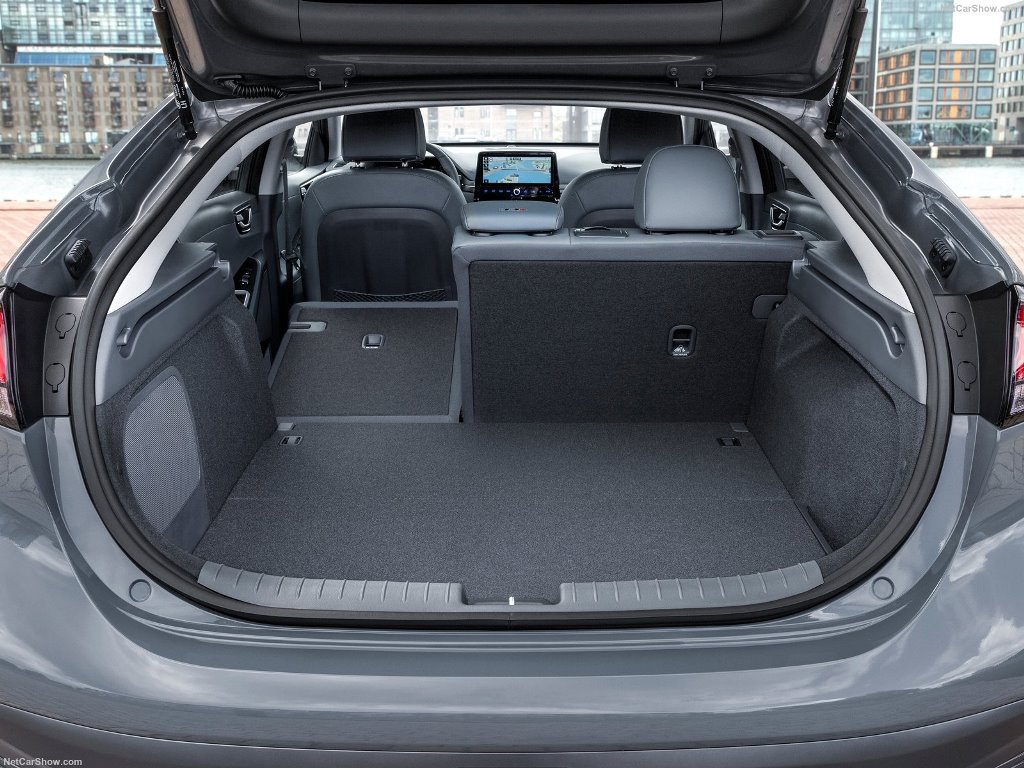 Flip the back seats down and there’s enough room to carry a bike with one wheel removed. The high rear end and low roofline give it a slippery shape, while the big rear window is split by a dividing bar. It’s noticeable in your rear-view mirror, but doesn’t really affect visibility. 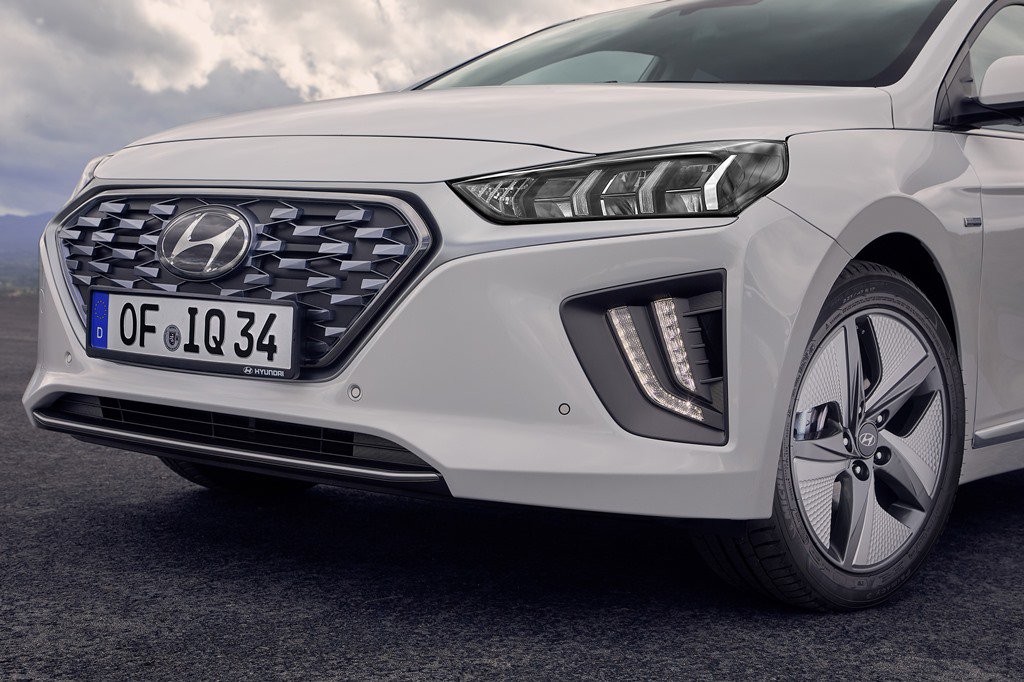 There’s also a host of standard safety kit, including autonomous emergency braking (a system that can stop the car automatically in an emergency), lane-keeping assistance and tyre-pressure monitoring for individual tyres. 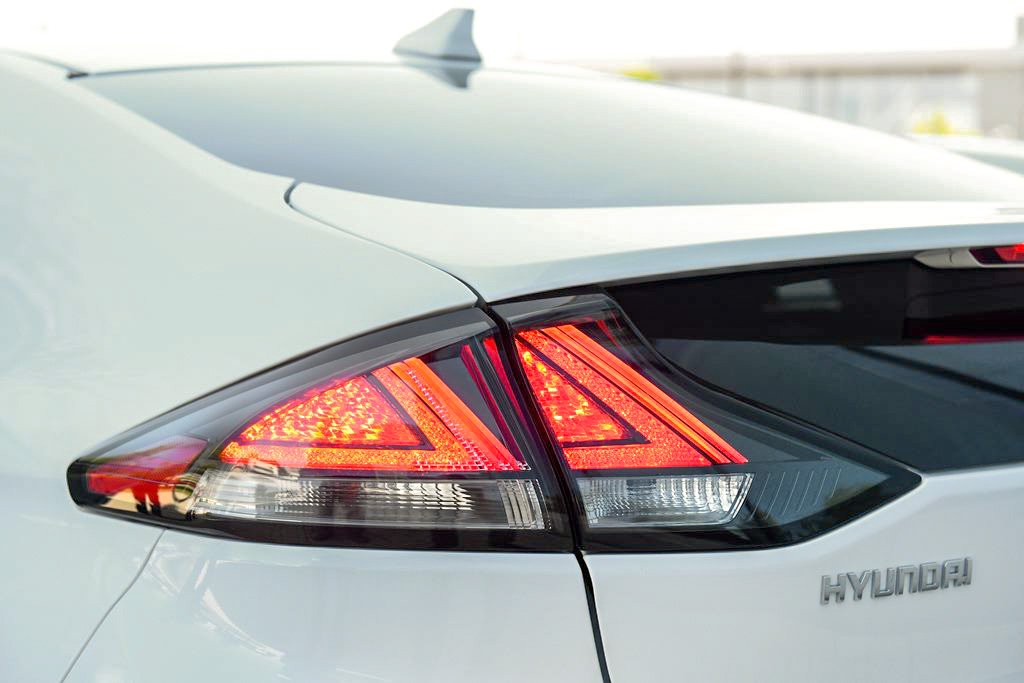 The Ioniq Hybrid combines a 1.6-litre petrol engine with an electric motor and a small battery pack, driving the front wheels via a six-speed dual-clutch automatic gearbox.

The Ioniq Hybrid glides away in virtual silence, but as the speed builds it’s easy to feel the point at which the 1.6-litre petrol engine kicks in. This engine was designed specifically for this application and working alongside an electric motor its combined power is 139hp. This is enough to see the car get from 0-62mph in 10.8 seconds, or 11.1 seconds when equipped with 17-inch alloys. 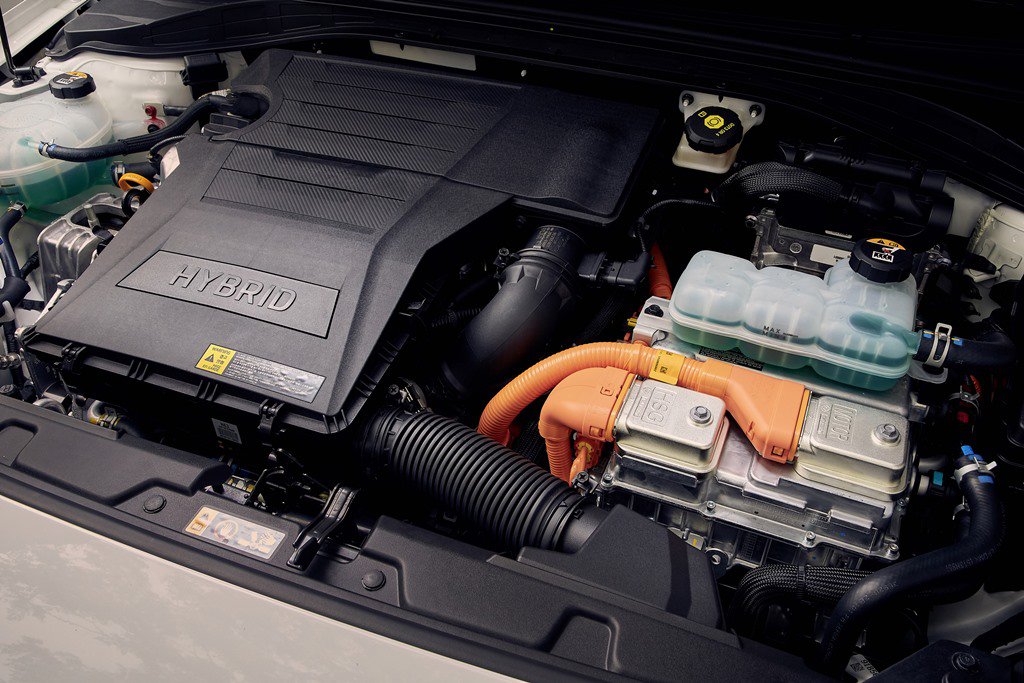 The big difference between this car and the Toyota Prius is its gearbox, which is a six-speed dual-clutch automatic, unlike the CVT-type ‘automatic’ deployed on the Prius, which drones under acceleration and isn’t much fun to use.

It is capable of travelling on electric power alone, but only for short distances – in most circumstances petrol and electric work together, boosting performance and (hopefully) saving fuel. 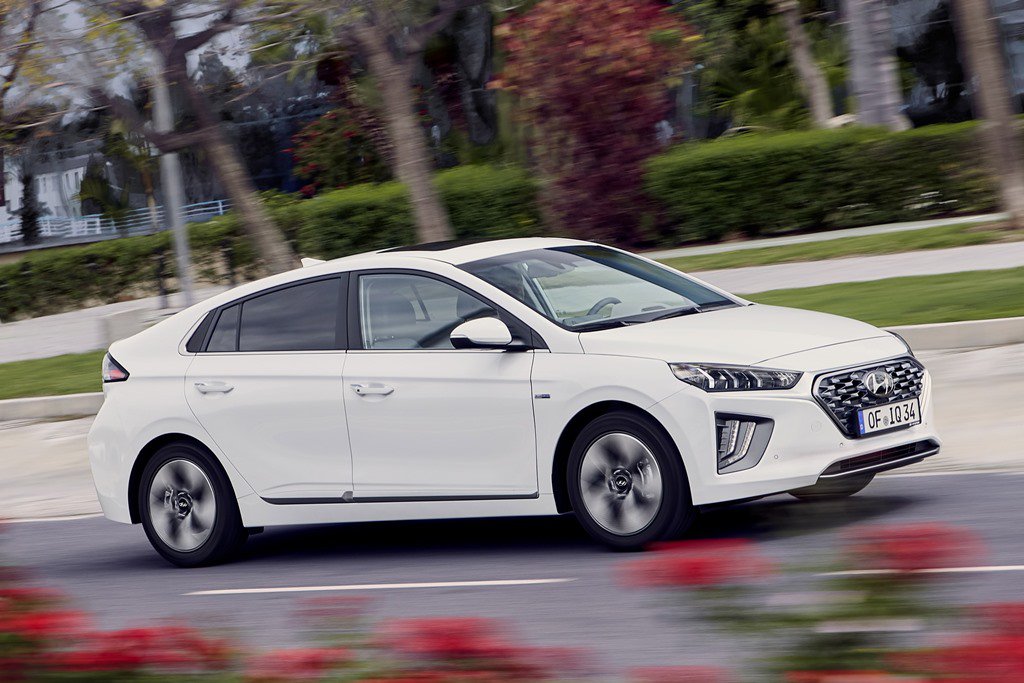 On the road, the driving experience feels much like any other automatic car, thanks in whole to that proper automatic ‘box. None that could (or should) realistically scupper a deal. There are some cheap plastics inside, but located lower down in the cabin. The engine can sound strained at higher revs or when pushing on, and the Hybrid will likely be not as inexpensive to run as the PHEV or EV versions.

The Ioniq Hybrid will suit those who either don't want the bother of recharging a car or simply want an eco-conscious vehicle that will form an integral part of their work-life balance.

Overall, the Hyundai Ioniq Hybrid has many good things going for it. It is less geeky looking than most of its eco peers, has a refreshed cabin and a decent level of standard equipment.

It makes a compelling case – both private or business – for those seeking low running costs and should catch the eyes of those thinking about making the switch from diesel to hybrid motoring.

* Browse our top leasing deals on the 2019 Hyundai Ioniq hybrid, PHEV and EV.